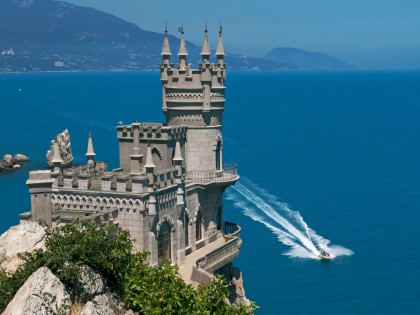 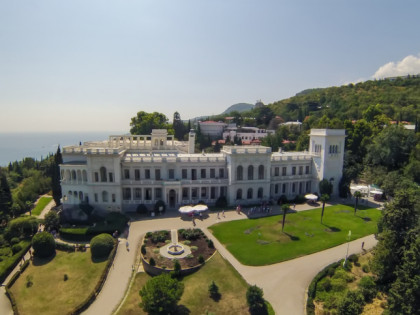 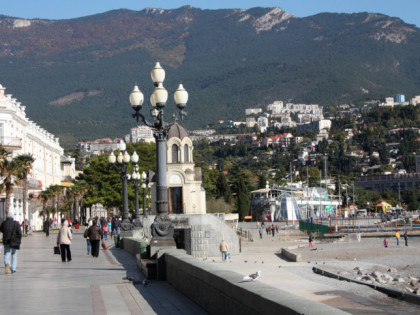 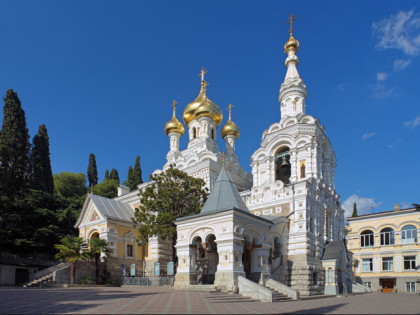 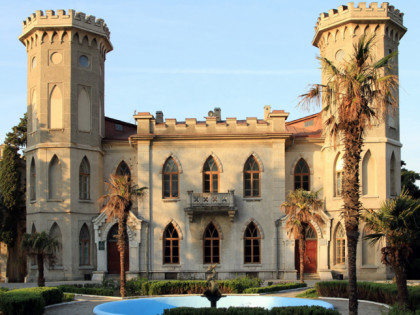 Yalta - the pearl of the Crimea

Yalta is a visiting card of the Crimean Peninsula. It is often called the pearl of the Black Sea thanks to the wonderful beaches, sanatoriums with thermal springs and healing aromas of fir- needle, mountain plateaus and waterfalls. Numerous palace and park ensembles with museums and exhibition halls complete the picture. The most famous of them is the Livadia Palace, a summer house of the last Russian emperor. In addition, in Yalta one can ride a cable car and participate in tasting local wines. In this unhurried and shady seaside town everyone will find the pleasure they like.

Yalta is located 80 kilometers far from Simferopol on the Black Sea shore on the slope of the Main Ridge of the Crimean Mountains. The administrative resort of Yalta includes the nearest settlements of the Southern coast: Alupka, Simeiz, Gurzuf, Foros, Miskhor, Massandra, Koreiz and Gaspra. Therefore, the territory of the resort was called Big Yalta.

According to the legend, Byzantine merchants who crossed the Black Sea on ships saw the Crimean coasts and exclaimed: «Yalos!», which means «shore» in Greek. According to other sources, the name Yalta came from the Turkic languages. But historians claim that about two thousand years ago Tauri were the first who came to this land and created here the settlement of Taurida. The name Dzhalita was first mentioned in 1154, and the Italian maps of the XIV century called Yalta Gealita.

For three hundred years Yalta was a part of the Turkish sultanate. After the first Russian-Turkish war in 1783 Crimea became a part of Russia. In those days Yalta was a modest village with wooden buildings. The first stone structure of Yalta was the bell tower of the St. John Chrysostom Church on Polikurovsky Hill. In 1837 according to the highest order of the emperor, the creation of the Yalta district was announced, and in 1843 the first general plan of the city with the embankment and several streets was approved. At that time 224 residents lived in the twenty houses of Yalta. But then the rapid development of the city began: the construction of a highway, the erection of a huge number of palaces, estates and private cottages. And in 1873 after launching of the railway between Sevastopol, Simferopol and the central part of Russia, Yalta turned into a fashionable resort, where the Russian aristocracy gathered every summer.

At the beginning of the XX century clinics opened one after another in Yalta. In St. Petersburg and Moscow the climate of Yalta was well advertised, the medicinal properties of which did not lag behind the Mediterranean one. Indeed, Yalta’s air, saturated with iodine, oxygen and aromas of pine and juniper resins, has a beneficial effect on the recovery of the body especially in the treatment of the respiratory tract. If compared with the Black Sea coast of the Caucasus, in Yalta the climate is drier: there are a few rainfalls here, and the heat is much more tolerated. The temperature in summer rises above the mark of +30, and in winter it sometimes does not fall below +20, the water temperature in the holiday season is +22-24 degrees.

Hard times came for the resort after the 1917 revolution. All the luxurious palaces and estates were nationalized. During the Second World War from 1942 to 1944, Crimea and Yalta were occupied by German troops. In Yalta an underground organization worked to help fight the invaders. When Yalta was liberated, part of the historical buildings suffered, but most palaces survived due to the efforts of local residents. One of the most famous palaces is the Livadia Palace, where the imperial family of the Romanovs loved to spend time. And on February 4, 1945 this palace hosted the famous Yalta Conference — a meeting of the leaders of the three countries of the anti-Hitler coalition, the so-called «big three»: Stalin, Roosevelt and Churchill. Documentary evidence of that meeting today can be seen on the first floor of the palace.

The prosperity of the resort took place in the post-war years, when the active construction of sanatoriums and vacation retreats began here. Large hotels, cinemas, restaurants and cafes appeared in Yalta that time. The world’s longest mountain trolleybus line (85 km), leading from Simferopol to Yalta, was built. The stony and pebbly Yalta beaches were also artificially created in the postwar period. The swimming season in Yalta begins in late May and lasts till October. One can find no vacant place on the beaches in the peak season. The sea is warm in September-October and the sun is not so hot. So here comes the real velvet season. Most of the beaches are equipped with toilets, showers and deck chairs. There are cafes and children’s entertainments. The cultural component should be also added to the beach rest in Yalta, as the Big Yalta is full of monuments of architecture and interesting museums. We mean Vorontsov Palace as well as Livadia Palace, associated with the life of the imperial family of the Romanovs, and museums dedicated to the life and work of writers. A large number of parks, including the famous Nikita Botanical Garden, contribute to long walks in the fresh air.

Rest at the resort also supposes getting acquainted with the local cuisine. Representatives of more than 80 nationalities live in the south of Crimea today: Russians, Ukrainians, Tatars, Armenians and others, who somehow influenced the gastronomic habits of the inhabitants of this region. But the Crimean-Tatar cuisine is its flavor. Many Tatar cafes and restaurants are open along the Yalta coast, in which it is necessary to taste samsa — Tatar pies with meat, lagman — spicy lamb soup with homemade noodles, traditional pilaff and shish kebab and sarma — rolls with grape leaves. Tatar chebureks and honey baklava — pastry preserved here since the days of the Turkish sultanate are sold at each corner. If you want to taste something special, you need to go to the Yalta market. In summer there is a huge selection of fruits and vegetables. Exceptionally Crimean is the red Yalta onion, the flat heads of which in the form of large red disks cannot be confused with anything else. The flatter and larger the bulb, the sweeter it tastes. A very sweet Crimean fig appears here in the middle of summer. It is worth paying attention to the Crimean honey which is collected in the mountains. As for souvenirs, people most often take from Yalta a mixture of dry herbs, which are brewed up like tea, lavender oil, Massandra wines and all kinds of juniper products.

Yalta is also a festival city. Cultural events and festivities are held on the embankment of the city. In winter Yalta is not empty either: tourists come to enjoy a warm climate and go skiing on the Ai-Petri plateau. This is an excellent opportunity to find oneself simultaneously in two seasons — winter and spring. Yalta is a unique place and has a special property: those who have once visited it, fall in love with Yalta once and forever. And all their life they are attracted by the warm Yalta, which is hidden from the cold winds by the ridges of the Crimean Mountains.

One can get to Yalta both by land and by air. The latter option is much simpler and saves a lot of time. Planes arrive here from many Russian cities: St. Petersburg, Novosibirsk, Sochi, Kazan, Yekaterinburg, Krasnodar, Tyumen, etc. The maximum number of flights arrive from Moscow. The flight takes two hours. All flights arrive to Simferopol International Airport. One can get from the airport to Yalta by using the «Fly & Bus» transfer service, which is organized by Aeroflot, and takes 2 hours. On this route there is also a trolleybus № 55, the journey time is 2 and half hours. One can also get a taxi.

Cafes, bars and restaurants in Yalta 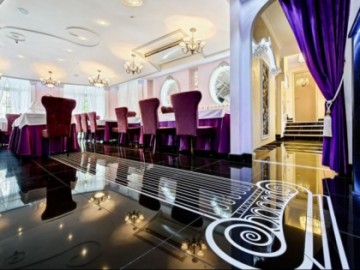 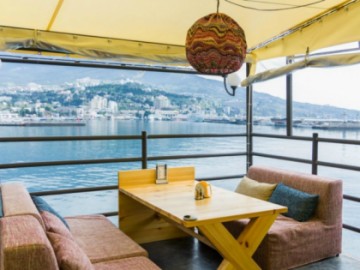 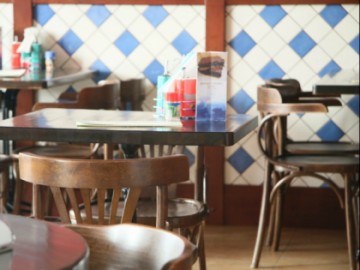 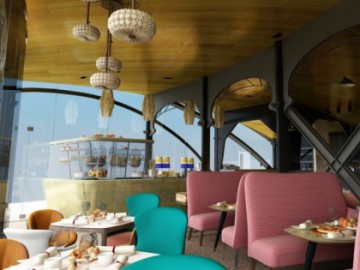 Places of interest in Yalta 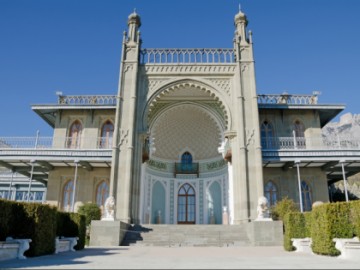 Vorontsov palace: diabase and lions on the terrace 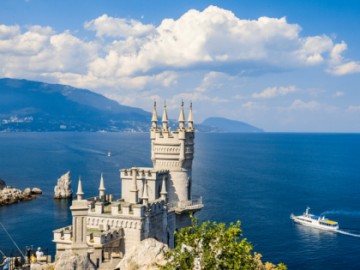 Swallow's nest: a castle of love on the edge of a rock 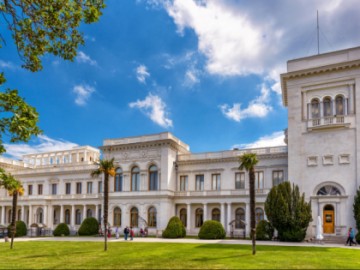 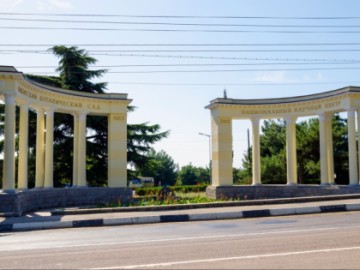 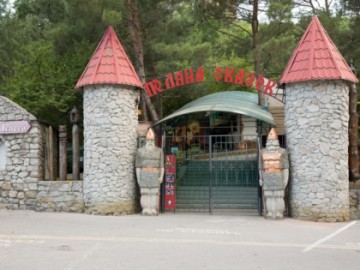 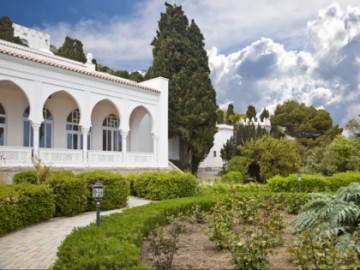 The palace Kichkine - a baby with an oriental character 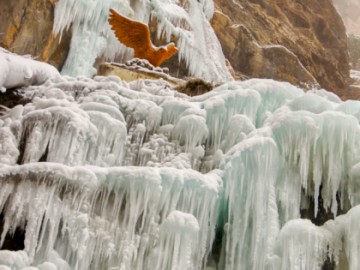 Waterfall Uchan-Su - the highest waterfall in the Crimea 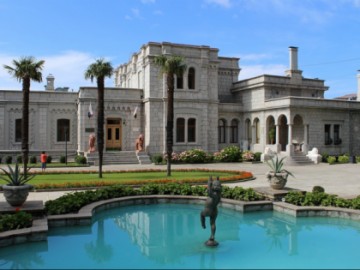 Nearby
Cities near Yalta
Simferopol