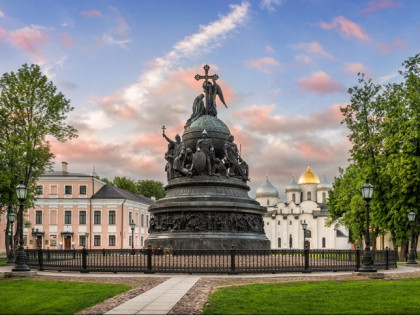 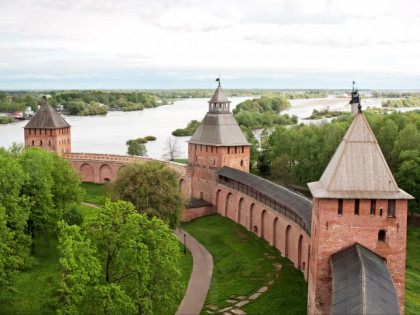 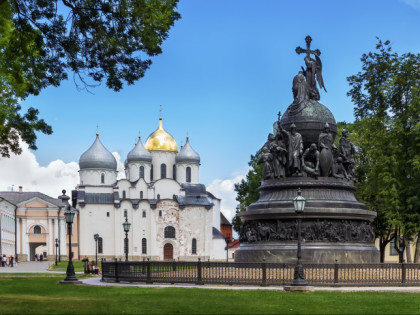 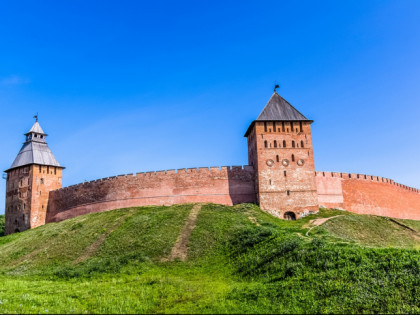 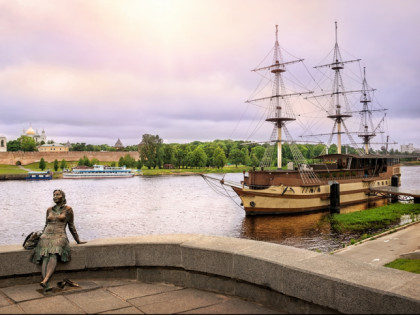 Veliky Novgorod — the Birthplace of Russia

Veliky Novgorod, divided into the Torgovaya Storona and Sofiyskaya Storona by the Volkhov River, is one of the most ancient cities in Russia. Its history extends back about more than a thousand years! It was here where the ancient princely dynasty of the Ruriks was born, from which the «tsarist» dynasty later «grew up». Here the Kremlin — Detinets and St. Sophia Cathedral — the oldest temple in Russia, was built. In 1136, the Novgorod Republic was created here, that marked the beginning of the Russian statehood. Historical monuments of the city and its environs are recognized as UNESCO World Heritage Site. And a few years ago, Veliky Novgorod was recognized as the most landscaped city of Russia!

Veliky Novgorod was founded in 859. As legend has it, in those times the Novgorodians invited the Varangian Prince Rurik. He settled on the bank of the Volkhov, at the spot where the river outflows from Lake Ilmen. Today this place is known as Rurikovo Gorodische, where archaeological excavations are going on up to now. In the 11th century Novgorod gained independence from Kiev and became the first free republic in the territory of feudal Rus’. In honor of this event the first wooden Kremlin, Detinets, was built on the picturesque bank of the Volkhov River. A little later, the first stone St. Sophia Cathedral was erected behind its walls, which is considered to be the oldest surviving church in Russia.

Thanks to the successful location of the city on the most important trade route «from the Varangians to the Greeks», that is, from Scandinavia to Byzantium, Veliky Novgorod became the major center of Ancient Rus. The independent Novgorod Republic successfully competed with the major European powers and the cities of the Hanseatic League, which united about 300 European trading cities in the period from the XII to the mid-XVII century. The 12th century was the golden age for Veliky Novgorod. Historians testify that the Novgorod common people were literate, they wore leather boots instead of bast shoes, and the streets of Veliky Novgorod were paved much earlier than in Paris and London.

Veliky Novgorod lost its strategic importance after Peter the Great founded the northern capital of the Russian Empire, St. Petersburg, in the early XVIII century. In memory of the millennium of invoking of the Varangians to Rus, the «Millennium of Russia» Monument, the first monument in honor of the state, was erected in 1862 in the territory of the Novgorod Kremlin.

Veliky Novgorod sustained great damage during the Great Patriotic War. It was occupied by German troops, which destroyed dozens of churches and took hundreds of valuable icons and other cultural objects to Germany. In the early 1950s, when the horrors of the war were over, archaeological excavations began in the historic part of the city, which are going on these days. The largest site for exploration is called the Troitsky excavation site and is located not far from the Kremlin. Here, hundreds of birch-bark letters, utensils, ornaments, musical instruments and military equipment were dug out of the earth, and also the remains of several urban estates of the 11th-15th centuries were found. Today, tourists can visit the Troitsky Excavation site with an excursion and be in the so-called «Theater of Time» which allows to go down the level of soil dating back to the 10th century. In 1992, historical monuments of Veliky Novgorod were inscribed on the UNESCO World Heritage List.

In recent years, special attention is paid in Veliky Novgorod to the revival of traditions of the local cuisine. In summer and autumn, the city hosts several gastronomic festivals, during which restaurants prepare a special «Novgorod menu» for the guests. It is based on the dishes stewed in the oven. Many establishments offer dishes from fish caught in Lake Ilmen. Also, cooks actively use berries and mushrooms from Novgorod forests when preparing food. You can find real masterpieces of Russian gastronomy in the menu of local restaurants: from golden pancakes with a filling of forest mushrooms or pike caviar, to Old Russian cabbage soup, bear cutlets with cranberry sauce and buckwheat baked in the apple. As for traditional Russian drinks, here you can find different infusions, Russian kvass and mead. Worth a try is the popular local sweet — sulchiny. These are «envelopes» made from rye flour stuffed with millet porridge. They are served hot, poured with melted butter. The story runs that Catherine the Great, when traveling from St. Petersburg to Moscow, stopped in Veliky Novgorod to taste this dish.

The festival poster of Veliky Novgorod is very rich. A lot of spectacular festivities are held in Vitoslavlitsy Open-air Museum of Wooden Architecture. A holiday dedicated to Christmastide is organized in January, with folk games, a ritual feast and winter amusements. In autumn the city hosts a bell-ringing Festival «Zvonarskoye Veche», during which you can not only enjoy the beauty of the authorial ringing, but also try your hand at this difficult art.

Another popular Novgorod Festival «Sadko» is dedicated to folk art and crafts. It takes place in June in the Kremlin and in the Yaroslav Courtyard (Dvorishche). Song and dance ensembles from around the whole world perform within the frames of the festival. You can also buy a unique handmade souvenir such as a patchwork quilt, a ceramic bowl or a jewel-box woven from a vine. In summer once a month, a real interactive show is arranged in the Kokui Tower in the Kremlin, during which stories from the medieval life of Novgorod are reproduced. In recent years, Veliky Novgorod is also renowned for its numerous gastronomic festivals, like summer «EstFest» or «Ilmen FOOD Fest». During these events you can find very tasty dishes of Novgorod cuisine, such as pickled cisco aged in juniper vodka, or pancakes with burbot, millet and wild herbs.

To see Veliky Novgorod in all its glory, it is worth a visit in spring and summer. This time is perfect for leisurely walks along the ancient streets of the Sofiyskaya Storona with its powerful Detinets, the majestic St. Sophia Cathedral and the viewing platform of the Sofia belfry. There is an unusual Hanseatic fountain on the Torgovaya Storona in the warm season, and ancient churches, like the Church of Spasa-na-Iliene (Church of the Transfiguration of the Savior on Ilyina Street), are smothered in flowers. In summer, the Kremlin, Yaroslav Courtyard (Dvorishche) and the Vitoslavlitsy Open-air Museum of Wooden Architecture host numerous festivals and holidays, treating to kvass, hot sulchiny and delicious fish from Lake Ilmen. Cruisers run along the Volkhov River, from which Novgorod looks like many hundreds of years ago when the princes had been returning from distant campaigns and merchants had been carrying their goods «from the Varangians to the Greeks».

There is no civil airport in Veliky Novgorod. The nearest airways terminal to the city is St. Petersburg Pulkovo Airport, located 175 kilometers away. The northern capital and Veliky Novgorod are connected by regular bus and rail services. The train from St. Petersburg goes to the Novgorod-on-Volkhov station for about two hours. From Moscow, the train takes about eight hours and departs once a day. 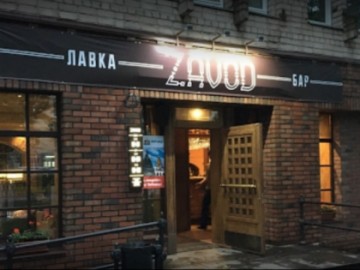 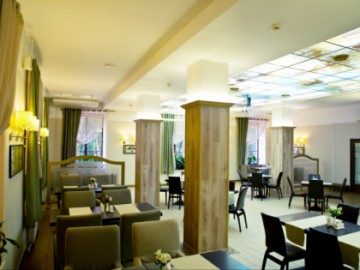 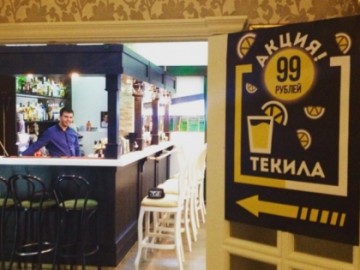 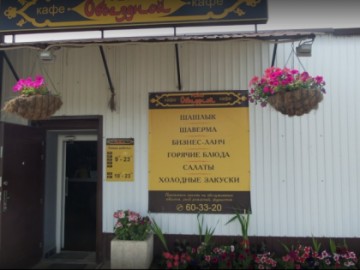 Places of interest in Veliky Novgorod 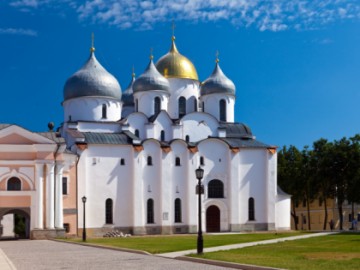 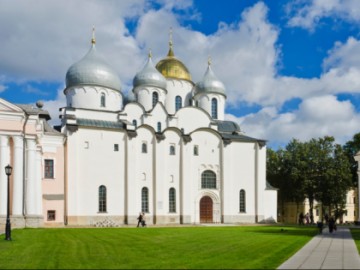 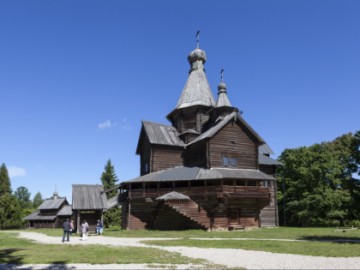 Vitoslavitsy Museum of Folk Wooden Architecture: the Life of a Russian Village of the XVIII Century 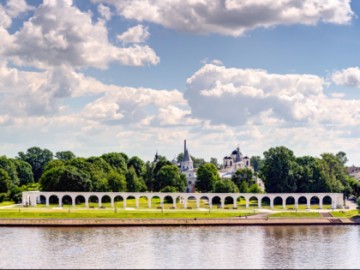 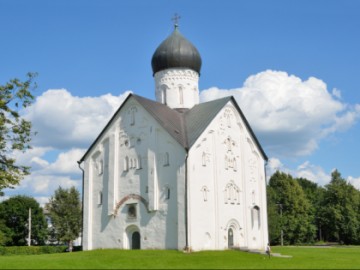 Church of Spasa-na-Iliene: Frescoes by Theophanes the Greek 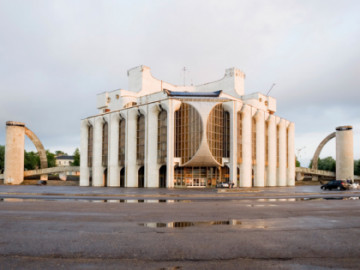 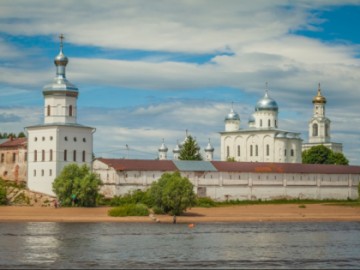 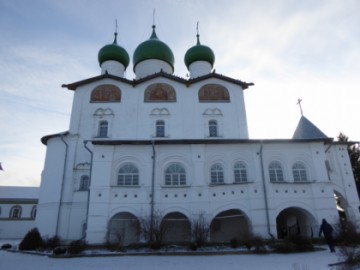 Nikolo-Vyazhishchskii Stavropegial Women's Monastery: Unicorns and Lions on the Facade