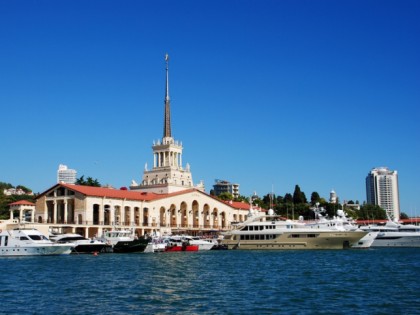 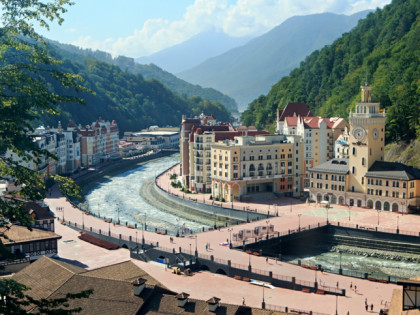 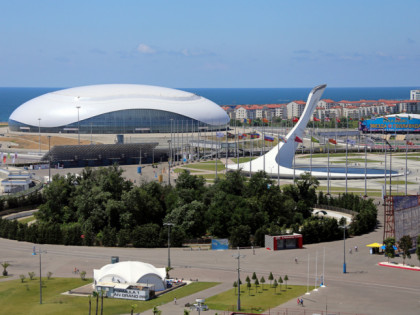 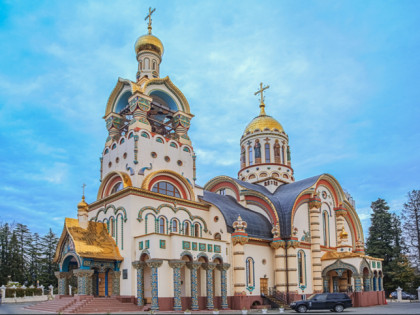 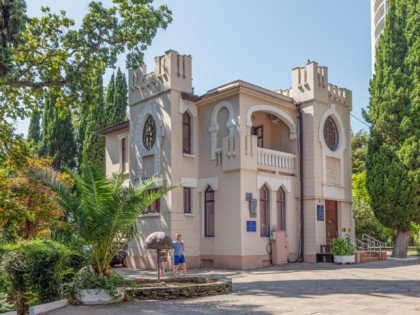 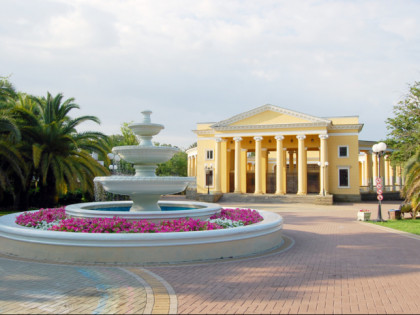 Sochi is the resort and sports capital of Russia, the sunniest and warmest city in the country. Alpine skiing routes in combination with the Black Sea, where one can swim from the end of May to October, brought Sochi the status of hostess of the Olympic Games in 2014. And the city beaches with a length of 118 km are designed for a relaxed holiday. Spa programs based on mineral waters and mud are offered in Sochi health resorts. Fans of outdoor activities can do yachting here, rafting along the mountain rivers, driving along the Olympic routes, going on a hike, going down to ancient caves and mastering rock climbing. And the local dolphinarium, arboretum and oceanarium diversify family holidays.

Big Sochi stretched for 145 km along the sea — from the village of Magri to the border with Abkhazia. This area was inhabited as early as the Paleolithic Age and was well known to the ancient Greeks. According to a legend, it was in the area of ​​Sochi either to Eagle’s rocks or to Mount Fisht, that Zeus chained Prometheus, who transferred fire from Olympus to people. Local girl Agura brought him food and drink, for which Zeus turned her into a river. Researchers of myths also believe that Odysseus fought against the Cyclops in the Akhshtyrskaya cave. Numerous local dolmens- huge stone structures, the purpose of which still remains a mystery, suggest huge mythological past. But it is known that in these places there were ancient Greek and Roman colonies. From the VI century Byzantium had a strong influence on the Caucasian coast. The ruins of a Byzantine temple of the XII century near the village of Loo have been preserved to our days. In the thirteenth century the Byzantines were pushed by the Genoese merchants who, in their turn, were swept away by the Ottoman Empire in the 16th century.

The Turk Evliya Celebi mentioned Sochi in his records in 1641 for the first time. By the XIX century the territory of Sochi was occupied by the Abkhaz-Adyghe tribes, some of them decided to move to Turkey in 1864 after the defeat in the Caucasian war. By that time Russia had already built a line of coastal fortresses: the Fort of the Holy Spirit on the site of modern Adler, Alexandria — the future Sochi, Lazarev, Golovinsky. Since 1866 settlers have come to the coast: Russians, Belarusians, Georgians, Armenians, Moldovans, Estonians, and Ukrainians. Thus, the Armenian settlement grew up in the village of Verkhnee Loo, and the Estonian settlement in the Esto-Sadok settlement. The Russian Emperor Alexander II got land on the coast.

A new stage in the history of Sochi began in 1886, when the healing properties of mineral water in the valley of the Matsesta River were confirmed. Since the end of the 19th century hotels, villas and boarding houses have been actively built here. In 1892 the villa «Nadezhda» was completed, around which a unique arboretum was formed — one of the main sights of modern Sochi. In 1898 industrialist Khludov made Riviera Park in his estate. Now it is a popular amusement park with attractions and dolphinarium.

After the revolution of 1917 Sochi received the status of a city. The Soviet government continued building sanatoriums in the region and turned Sochi into an all-Union health resort. The only warm sea in the country; air with aromas of citrus, cypress, magnolia and box-tree; therapeutic mineral waters — all this made Sochi a desirable place of rest, which every Soviet person had to visit at least once in his life. Stalin was a great admirer of the local climate and the Matsesta waters. A summer house was built for him here which can now be visited with an excursion. From the window of his house one can see the observation tower on Mount Akhun which was opened in 1936. One can also admire the Black Sea and the Caucasus Mountains without leaving the city — from the tower on Mount Batareika.

At the beginning of the 20th century it was discovered that tea could grow here too! In Solokh-Aul а peasant Koshman managed to get harvest from the most northern tea plantation in the world! A museum operates in his house now, and one can taste different kinds of Black Sea tea in the tea houses in Uch-Dere.

Since 1961 Sochi has got four districts. Lazarevsky is the longest site with resort villages Lazarevskoe, Loo, Golovinka and Dagomys, the former estate of Nicholas II. The central district is a cultural and administrative center with an art museum, the Winter Theater, the Riviera Park, the Dendrarium and a light-musical fountain on the age-old Plane-tree alley. Here the oldest Orthodox church of the city — the Cathedral St. Michael the Archangel of the middle of the XIX century — has been preserved.

The main attractions of the Khosta district are the relict yew and box-tree grove with millennial trees, the observation tower on Mount Akhun, the healing springs of Matsesta, the huge solutional cave Vorontsovskaya and the garden museum «Tree of Friendship». This lemon tree was planted in 1934. Over time the honorable guests of Sochi began to plant here different citrus fruits and plant trees from other countries. By the way, 24% of the flora of Sochi are endemic — plants that are found only here.

Adler district is first of all the Olympic park with modern stadiums and a line of the Formula-1. In the resort town of Adler there are the main water attractions — the Dolphinarium «Aquatoria» and the Sochi Oceanarium. Climbing the mountains one can enter the Akhshtyrskaya cave, where the early man site and the remains of a cave bear were found. Above the Akhshtyrskiy Kanyon on the bungee attraction «Megatroll» one can jump with a rope at a speed of up to 150 km/h. Towards the Adler district the village Krasnaya Polyana Mountain Cluster is located with Rosa Khutor Alpine Resort, where the Winter Olympic Games-2014 were held, is also within the Adler district. On the way from Adler to Krasnaya Polyana it’s worth visiting the largest trout farm in Russia.

Despite the proximity of the sea local people have always preferred meat — mutton, beef, chicken and turkey to fish. Once in Sochi make sure to taste Adygean style kebab. It is made of lamb, not marinating meat in advance, and watering it with marinade in the process of frying. As a side dish it is customary to serve dishes from millet, beans, corn, pumpkins and vegetables. Soups are popular here like in the European part of Russia. Dashholaps — chicken broth with beans and walnuts. As elsewhere in the Caucasus, sour-milk products are also popular here. Adygei cheese is a traditional local stuffing of vareniki (Slavonic dish made of dough stuffed with meat, curd, vegetables, fruits, mushrooms or berries) and the base of guubata — pies made of hojaldre. The abundance of spices and herbs: cilantro, dill, onion and garlic salt makes the Adygei cuisine colorful.

The hospitality of the Sochi residents was felt by the guests and participants of the XXII Olympic Games in 2014. The Games became the main event that affected the image of Sochi in the 21st century. In addition to the stadiums and the Formula 1 track, a copy of the longest street Kurortny Prospekt was built. The line of new electric trains connected the city center with the Olympic Park, the airport and Krasnaya Polyana.

Matches of the World Cup will be held at Fisht Olympic Stadium in 2018. The stadium, with its silhouette resembling the mountain of the same name, was built especially for the opening and closing ceremonies of the Olympic Games. By 2018 it was expanded to 45,000 seats. After the championship the stadium will become one of the bases of the Russian national football team.

The cultural life of Sochi is also full of events. Since 1991 every June the stars of Russian cinema come to Sochi to the Kinotavr Film Festival. In September 2015 the New Wave pop music contest moved from Latvia’s Jurmala to Sochi. Since 2010 every August the international festival «AquaJazz» has been held in Sochi. The humorous performances of KVN (club of funny and ready-witted people) teams are also popular in January here. Actually, in Sochi revival reigns virtually all year round. After all, at any season there is something to be surprised at in Sochi and one can find what to do in Sochi.

The trip from Moscow to Sochi takes less than a day by a modern two-story train or just over two hours by plane. Direct flights connect Sochi with many Russian cities, as well as with Istanbul, Minsk, Yerevan. From the Marine Station you can sail to the Abkhazian port of Gagra or the Georgian Batumi.

Cafes, bars and restaurants in Sochi 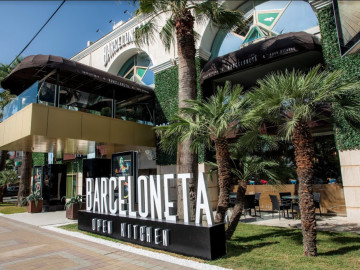 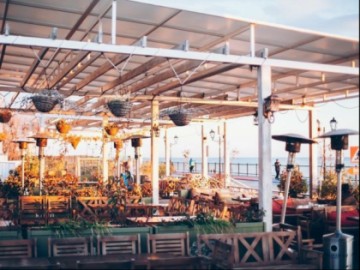 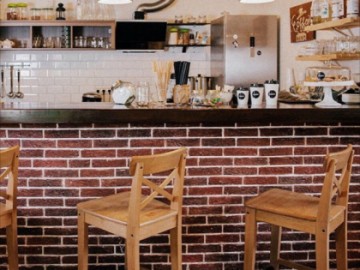 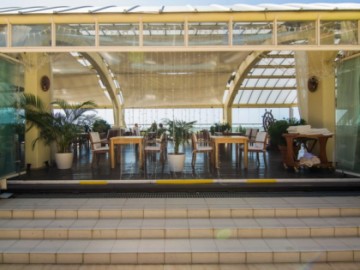 Places of interest in Sochi 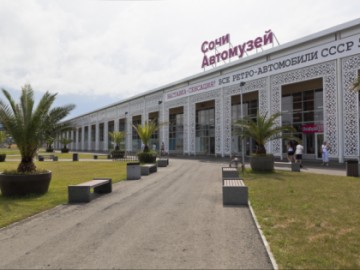 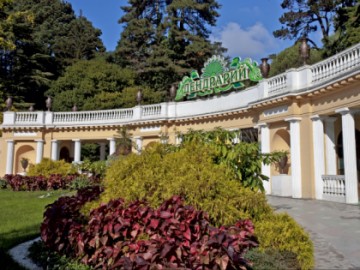 Sochi Arboretum: terraced park and villa of the XIX century 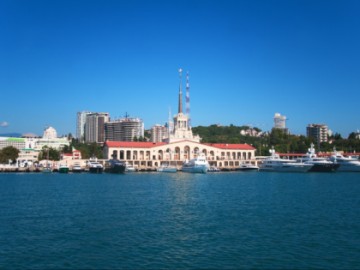 Marine Passenger Terminal as a symbol of Sochi 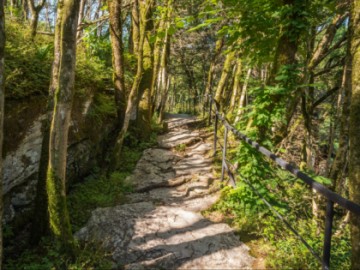 Yew and box-tree grove
Museums and Exhibitions • Other places 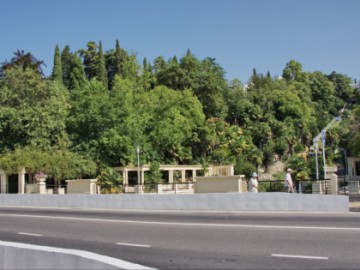 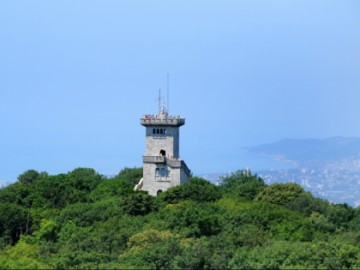 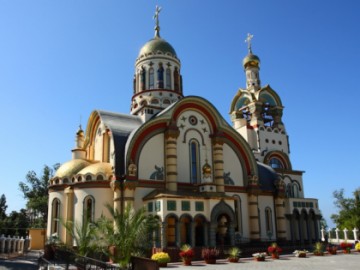 The Church of St. Vladimir
Architectural Monuments • Temples and places of worship • Cathedrals and churches 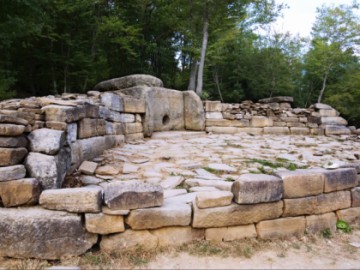 Nearby
Cities near Sochi
Krasnodar