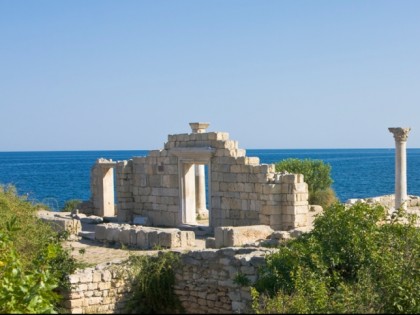 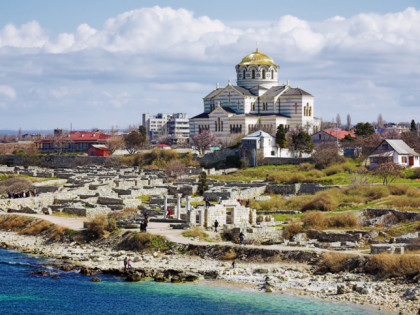 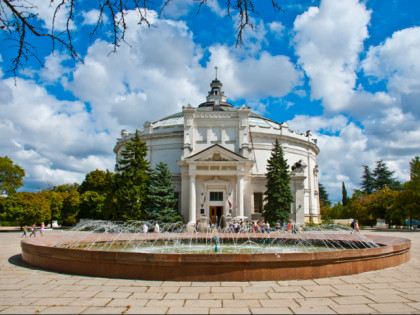 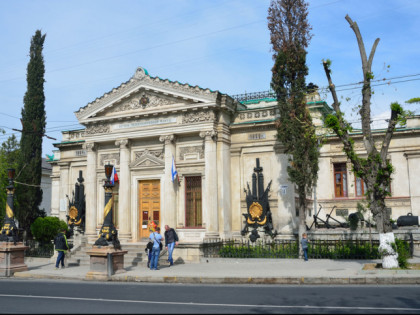 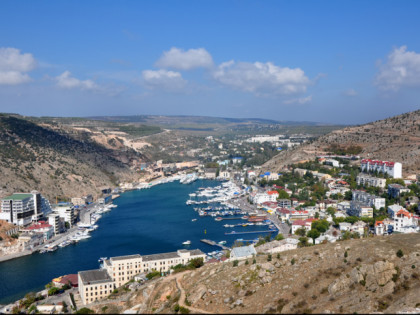 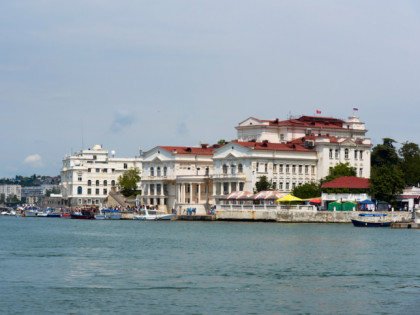 Sevastopol - the city of Russian sailors

Sevastopol is first of all a city with a rich military history. Most of the sights here are saturated with the memory of the military battles of the Russian army. They begin with the first defense of Sevastopol during the Crimean War in 1853 and end in desperate fighting during the Second World War. There are absolutely unique places here. For example, one can make a trip to the distant past through the ruins of Chersonesus, explore the cave monastery in Inkerman, visit the submarine repair plant, which was cut down in the mountain in Balaklava Bay, and meet the sunset on the ruins of the Genoese towers. And, of course, do not forget to sunbathe on the beaches of Sevastopol and Balaklava and taste both local fish dishes and the usual food of the Crimean Tatars.

Sevastopol was founded in the XVIII century. However, the Tauric Chersonese (Chersonesus) which is within Sevastopol today has a much more ancient history. In the V century BC the Tauri tribes were neighboring the Greeks who built the fortress of Chersonesus. In the II century Chersonesus was a developed policy with a Roman garrison. The region was а part of the Byzantine Empire, and the Russians appeared here in the late 10th century (in the annals of that time the city was called Korsun). Chersonesus is considered to be the cradle of Russian Christianity: it was here that Prince Vladimir adopted Orthodoxy before the wedding with Anna, Byzantine emperor’s sister. A century before that the Greeks founded the first Christian cave temple in the place of the miraculous appearance of the icon of St. George the Victorious. Now this is the male Balaklava St. George Monastery. The St. Vladimir’s Cathedral opened in 1891 rises in Chersonesus at the site of Price Vladimir taking baptism. After the destruction of the Golden Horde Chersonesus fell into decay and was forgotten in oblivion till accidentally discovered during excavations in 1827.

The history of the Genoese Cembalo Fortress dates back to the XIV-XV centuries. Its dilapidated three-tier tower — the dungeon — is the symbol and decoration of Balaklava — one of the four districts of modern Sevastopol. At the end of the XV century it was captured by the Turks, and the Crimean Khanate obeyed the Ottoman Empire. After the Russo-Turkish War of 1768 — 1774 years the Khanate gained independence, and in 1783 became part of the Russian Empire. The date of foundation of Sevastopol is June 14, 1783. It was then that construction of the first houses began in Sevastopol, including the house of the commander of the Sevastopol squadron Thomas MacKenzie, the chapel of St. Nicholas the Wonderworker, and the wharf in place of the modern Grafskaya Wharf.

The development of the city was stopped because of the Crimean War declared by Turkey to Russia. In 1853 — 1856 Sevastopol became the arena of bloody battles of the Russian army against the combined forces of Turkey, England, France and Sardinia. Here the young Count Leo Tolstoy was carrying out military service and Nikolai Pirogov, the founder of Russian military field surgery, introduced advanced methods of treatment for the wounded. The monument to Admiral Nakhimov, who burnt the Turkish fleet at Sinop Harbor, stands today in the square of his name. The Sinop Staircase, one of the most beautiful ones in Sevastopol, is also called in the memory of this battle. After climbing it one can go to the St.Vladimir’s Cathedral, which is also called the Admiralty, as the heroes of Sevastopol are buried there: admirals Nakhimov, Lazarev, Istomin, and Kornilov. The panorama museum «Defense of Sevastopol in 1854 — 1855» «tells» about the events of that time. The moment of the Battle of Malakoff was captured on a giant canvas 115 meters long and 14 meters high.

But perhaps the most famous and striking monument of Sevastopol is the Monument to the sunken ships. It was installed in 1905 directly into the sea: a column on a granite cliff topped with a bronze eagle. They decided to preserve in such a way the memory of the sinking of their own seven warships on September 11, 1854 in order to block the entrance of the English and French fleet to the Sevastopol Bay. The defense of Sevastopol lasted for 349 days, after which the Russian troops were forced to leave the city. Under the Paris Peace Treaty of 1856 Russia renounced the protectorate over the principality of Moldova and Serbia, returned to Turkey its Kars fortress and Ardahan and got Sevastopol, Balaklava, Kerch-Yeni-Kale and everything that had previously been captured by the allied forces. Till 1871 Russia could not have a navy on the Black Sea. And this for years delayed the revival of Sevastopol lying in ruins after the war. In 1875 the railway connected Sevastopol with Moscow and St. Petersburg. At the beginning of the XX century Sevastopol started gaining popularity as a resort. But this was prevented by the revolutionary upheavals of 1905 and then of 1917.

The tragic history of the siege of Sevastopol was repeated in 1942 when the city was occupied by fascist troops. The Memorial to the Heroic Defense of Sevastopol 1941 — 1942 with Eternal Flame on Nakhimov Square is dedicated to the memory of the heroes of the Great Patriotic War. The city was liberated at a high price during fierce battles for Sapun Mountain in the southeast of Sevastopol. Trenches and dugouts can still be seen on this mountain. Part of the memorial is the Diorama «Sturm Sapun Mountain May 7, 1944». The visit to the memorial museum «35th Coastal Battery» leaves a strong impression. This is a restored complex of forts and underground casemates of the fire protection center of Sevastopol. It was the last bastion of the defending Soviet troops in 1942. Here one can go down to a depth of 25 meters and go through the casemates, where there was a power station, a bunk space, a cook-house and a medical unit.

After the war Sevastopol entered the list of the cities that were decided to restore first. In the period from 1960 to 1970 the city was actively expanding. A little earlier than this time in 1957 Balaklava-town in 15-minutes’ drive joined Sevastopol. Although it became a district of ​​Sevastopol, it was closed for free entry. One needed a special pass to get there. The reason of secrecy was a unique Balaklava bay in the shape of the Latin letter S. It is not visible from the sea side at any angle! A plant was built to service and repair submarines in this bay in Mount Tavros in the 1950s. And the boats themselves were based in the waters of the bay. The top secret facility that could withstand the impact of a nuclear bomb was converted into a museum in the late 1990s. Now anyone can enter it.

Being in Sevastopol one cannot but taste fish and seafood. They are definitely the main decoration of local cuisine. The most famous here surmullet or goatfish has been known since antiquity. It is worth paying attention to flounder and mullet, to taste shrimps and julienne from rapа whelk or mussels. A gastronomic festival «Mussel Express» is held in Sevastopol at the beginning of September, where chefs offer their variations of dishes from mussels and conduct master classes and tastings.

Fans of meat dishes need to taste the dishes of Tatar cuisine common in Crimea. The most popular fast food is chebureks with lamb, beef or cheese. Another ancient people of Crimea the Karaites are famous for pies «chir-chir» with meat or vegetable filling. The soup lagman, traditional for southern and eastern peoples, is cooked here from lamb with vegetables and noodles. At the end of the meal it is worth tasting tea made of fragrant Crimean herbs with jam from quince, dogwood or rose petals. A sweet theme is supported by the museum of marmalade in the eco-park «Lukomorye». Since 2010 not only master classes and tastings have been held here, but they also tell about the ancient technologies of sweets production.

The main city holidays in the city by the sea are certainly connected with the sea and the fleet. The most mass festivities are held in Sevastopol on Navy Day on the last Sunday of July. On this day from Primorsky Boulevard one can see the parade of the warships of the Black Sea Fleet. The Victory Day on May 9 is celebrated by ceremonial processions and salute. On the eve of the holiday the reconfiguration of the storming of Sapun Mountain takes place where up to 10 thousand spectators gather. In early September a large-scale Crimean Military Historical Festival is held, in which clubs reproduce battles of different epochs from antiquity to the «cold war». In early June the city takes a sailing regatta and the festival «White Nights in Sevastopol». In August the Balaklava Valley hosts an open-air music festival «Zolotaya Balka». The cultural life of the city does not freeze even in the cold season. In November Sevastopol becomes one of the sites of the Crimean international jazz festival. The heroic history of Sevastopol, museums reminiscent of local battles, the ancient monuments and the unique Balaklava with its museum of submarines in the mountain and the Genoese towers make this city on the Black Sea a point of attraction on the Crimean land.

To get to Sevastopol one needs to take a flight from Moscow to the international airport of Simferopol. Travel time is 2.5 hours. Another three hours are needed to get to Sevastopol from the airport by bus, taxi or train. They are planning to open a military airport Belbek for civil flights, from which to Sevastopol, only 30 minutes by car are needed. Direct rail service with Russia is currently not available. In the summer season from Moscow one can take the train to Anapa or Krasnodar, and then by bus, ferry and another bus to Sevastopol. The port of Sevastopol is connected by cruise routes with Turkey, Bulgaria and Abkhazia.

Cafes, bars and restaurants in Sevastopol 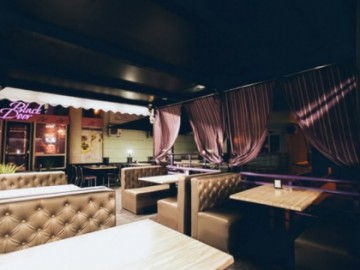 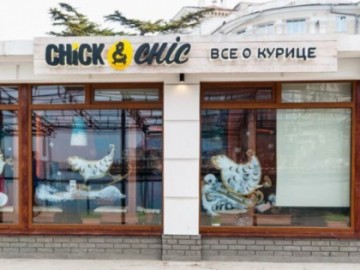 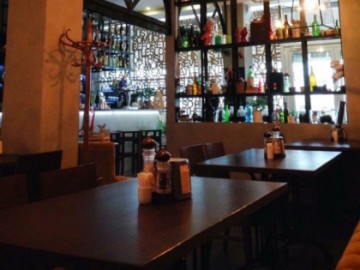 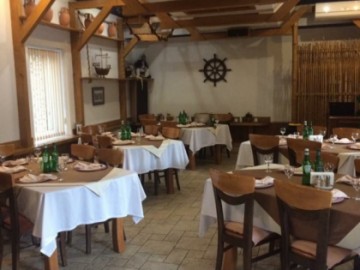 Places of interest in Sevastopol 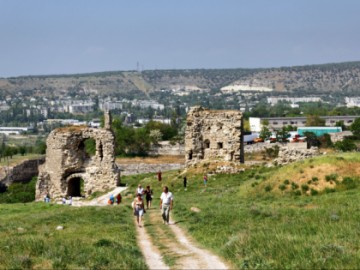 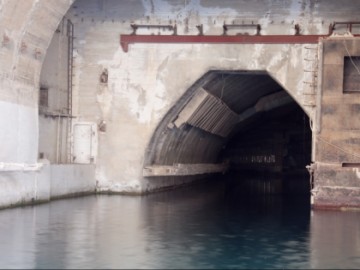 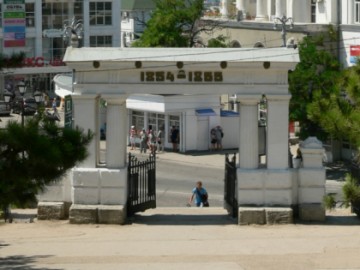 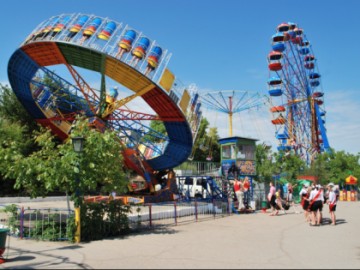 Historical Boulevard as a memory of the Crimean War 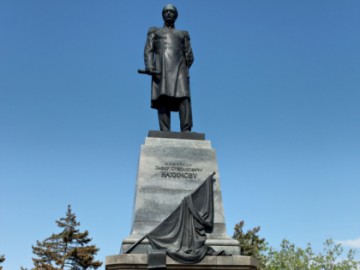 Nakhimov Square and Grafskaya Wharf – the birthplace of Sevastopol 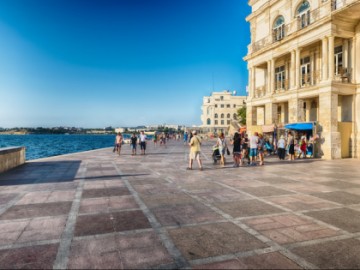 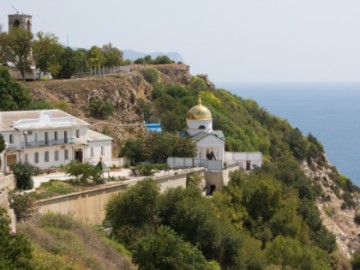 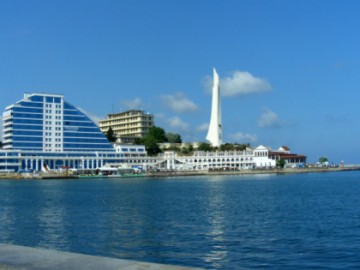 Nearby
Cities near Sevastopol
Yalta