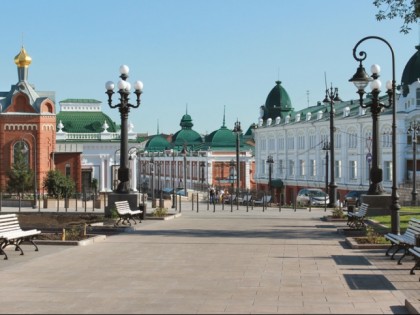 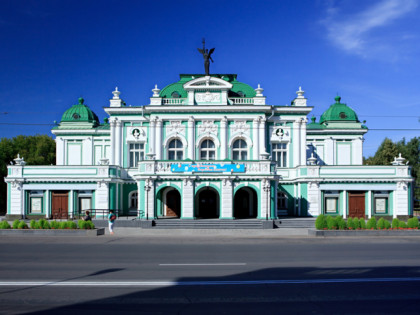 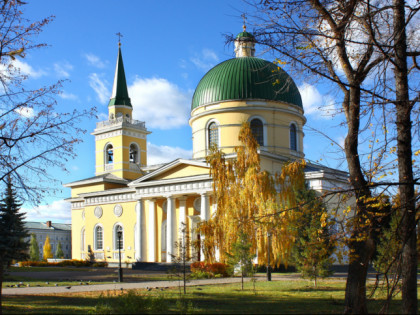 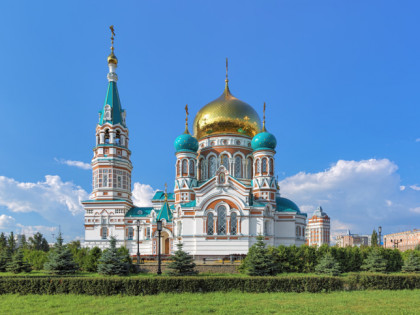 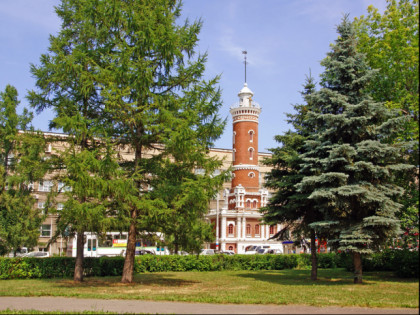 Omsk: Development from a Fortress to a Siberian Industrial Center

Omsk, a million-plus city in Siberia, the place where Dostoevsky lived in exile, is the birthplace of painter Mikhail Vrubel, «the third capital» of Russia during the Civil War, home to the famous Avangard hockey club ... Omsk has many faces, and many stories to tell to an interested listener. The city, which greatly celebrated its 300-year anniversary in 2016, boasts interesting and varied historic architecture, an abundance of unusual sculptures and monuments, rich cultural life and hearty Siberian cuisine.

Legendary Yermak began writing Omsk’s prehistory as a city. At the end of the XVI century he familiarized with Siberia, including the land where Omsk Oblast is today. The attached areas needed defense, so walled cities- Tyumen, Tobolsk, Tara, Obdorsk (now Salekhard), Tomsk and Krasnoyarsk- appeared on the map one after another. Omsk could be the next on the list: back in 1628 Tara’s war chiefs sent a petition to Tsar Mikhail Romanov, complaining of the damage of frequent attacks by Kalmyks and suggested erecting a new fortress near the Om River. The Emperor approved the idea, and even issued a decree, but due to various circumstances its enforcement was delayed for several decades.

The issue was raised again already under Peter I. The progressive ruler was looking for ways of protecting south-eastern Russian borders, exploring mineral resources in the region and at the same time of establishing trade links with China and India. To this end, he sent a number of expeditions to Siberia. One of them in 1714 was headed by Colonel Ivan D. Bucholz — a longtime associate of Peter I. The sovereign’s mandate was brief but capacious: «Your task is to go to Tobolsk; take the governor’s people to go to Lake Yamyshev and build cities there.» And it ended with the words: «On second thoughts, act as the situation requires, as befits an honest and conscientious officer.» A whole novel could be written about the adventures of the not too successful expedition of Bucholz. But the year of 1716 is particularly important for our history: it is when the team landed at the confluence of the Irtysh and Om rivers and built several fortifications for defense. The place tuned out a success and the construction of the first Omsk Fortress began there. This is the date when the history of Omsk starts. In 1768, the construction of a new fortress began on the opposite bank of the Om. It was larger and more resistant than the first. This very fortress, with civilian settlements that grew near, became the prototype of today’s Omsk.

Omsk Fortress remained an ostrog (a permanent or temporary strongpoint for the deployment of military was called an ostrog) till the end of the XVIII century. In 1782 it was incorporated in Tobolsk Vicegerency as a «district town» and on February 26, 1804 Omsk was granted its uyezd (the status of an administrative centre). One can get an idea of Omsk’s development rates by reading the description of the fires, which were a frequent occurrence there at the beginning of the XIX century. For example, in 1819 there was a fire in the fortress which the wind spread throughout the city. 80 houses, a guest house, a number of butcher’s shops, a tavern and the town hall burned. The total damage was estimated at 200 thousand Rubles. In 1823, 200 houses burned in a fire — that is, the city construction had not only completed after the previous disaster, but had even increased.

In 1825 the seat of the Council of the Superior Administration of Western Siberia moved to Omsk, which fact further strengthened the status of a city. In 1829 Nicholas I approved the general plan of Omsk, according to which the city area increased by almost four times. Several new temples were built in the city including, interestingly, not only the Orthodox Church, but also a mosque. The hope was that the existence of a mosque in Omsk would increase the loyalty of the local followers of Islam. The Catholics had a church, and for Lutherans, who were many among the command, a protestant church was built back in the late XVII century.

Omsk’s history in the middle of the XIX century is inextricably linked with the name of Fyodor Dostoevsky, who was serving there penal sentence as a member of the Petroshevsky circle. The city itself, especially at first, did not make a favorable impression on him. «The tiny town is dirty, warlike and extremely evil-living...» — the exiled writer complained in a letter to his brother. However, at the end of this ranting Dostoevsky still found nice words for Omsk: «Hadn’t I found people here, I would be completely lost.» In other letters and literary works the writer repeatedly mentioned with gratitude those who helped him get through the hard years of imprisonment in the ostrog. Based on the memories of this period of life, Dostoevsky wrote his «Notes from the Dead House». In Omsk there is a monument to Dostoevsky, his museum; the local university and one of the streets are named after him. The city visitors are offered most interesting excursions to explore Dostoevsky’s Omsk.

The construction of the Trans-Siberian Railway, which began in 1891, was a serious impetus to the development of Omsk in late XIX — early XX centuries. Omsk gradually grew into the largest Siberian commercial and industrial center. Interestingly, there were a lot of foreigners in Omsk’s business community. Offices of several US companies successfully operated in the city. One of the largest companies was owned by a native of Denmark, S.H. Randrup, and manufactured agricultural machinery, sewing machines. After the First World War it produced bodies for artillery shells and other military products.

During the Civil War, Omsk became the capital of White Russia. The residence of Admiral Kolchak, who took the title of Supreme Ruler and Commander-in-Chief of All Russian Land and Sea Forces, was in Omsk. The Russian intelligentsia of St. Petersburg, Moscow and other cities fled to the city in the hope of escape from the Bolsheviks. Many foreign countries also opened their embassies in the city. Most of the gold reserves of the Russian Empire were transported to Omsk. The State Bank started issuing money, which, in spite of poor quality, was in circulation in a vast territory — even in China. But by the summer of 1919, the main group of Kolchak’s troops was defeated, and in November the city passed into the hands of the Red Army. In February 1920, the Supreme Ruler was executed in Irkutsk. Thematic tours are organized in the city to familiarize with the life and tragic fate of this extraordinary man.

Omsk is kind of a record city for the quantity of streets with ordinal numbers in their names. There are as many as 36 North Streets in the city! Dozens more streets are numbered under the names Amur, Workers and Maryanovsky. However, local history expert Igor Fedorov explains this topographic phenomenon, undertaken in the 1920-ies, as an attempt to switch to the Anglo-American system of street names.

A sad fate was in store for many historic buildings: almost all major temples were destroyed. Only St. Nicholas Cossack Cathedral miraculously survived, which for many years was used for other purposes. In 1930 the King’s Gate — the triumphal arch was destroyed. It was built in 1891 to commemorate the visit of Tsesarevich Nicholas Alexandrovich, the future Russian Emperor, to Omsk. Three of the four gates of the second Omsk Fortress were demolished in different years. Only after restructuring they had the opportunity to return at least some of the monuments to the city. Some were restored, some had to be rebuilt from scratch according to the old drawings, or simply photographs. The revival of the Dormition Cathedral, which was rebuilt on the old foundations in 2005-2007, is one of the most ambitious projects of the recent years.

Today’s Omsk works on its image. The city visitors could be recommended to visit the local drama and music theaters. When it comes to museums, the Local Lore Museum and M.A. Vrubel Museum of Fine Arts deserve special attention. Fans of hockey can enjoy a match of Omsk’s Avanguard Club.

Omsk’s cuisine is enjoyable with its diversity. It includes both traditional Siberian recipes, such as dumplings or a variety of pickles, and Oriental cuisine. The fearless can try dishes of bear or elk meat, which are not particularly exotic there due to the proximity of the taiga. The well-known sweet cream cheese «Omichka» can be called a local specialty. Its recipe was invented in Omsk’s plant of processed cheese in 1969. It is true, many other enterprises in the Soviet Union territory took the production technology of this specialty in their armoury in Soviet times, but the right of the discoverer, albeit nominally, belongs to Omsk. Omsk-1 mineral water is another popular «signature» product.

You can easily bring an unordinary souvenir from Omsk. The city is replete with both solemn and funny statues and monuments, which are reproduced in souvenirs. In memory of Omsk you can buy a miniature version of the famous Monument to Stepan, the Plumber. The cast-iron plumber with an adjustable wrench, looking out of a manhole, appeared on Lubinsky Avenue in 1998 and quickly became a cult figure. Romantic people will choose the nice Statue Lyuba — a copy of as nice a sculpture perpetuating the memory of the beloved wife of Governor Gustav von Gasfort. In fact, a little is known about her: only that she arrived in Omsk with her husband at the beginning of 1851, and in July of the following year died of tuberculosis at the age of 23 years. Over the years the story was added with a mass of plausible details, and the sculpture by Sergei Noryshev helped «substantiate» Omsk’s residents’ favorite romantic image even more. Other popular objects replicated in souvenirs include the Dormition Cathedral, Tara Gates, Batushkin mansion (Kolchak’s house), a winged genius figure on the pediment of the local drama theater.

Omsk has its own international airport, located just five kilometers from the city center. Flight from Moscow to Omsk takes about three hours. Most of the air routes from abroad to Omsk imply connecting flights from Moscow. But you can also get to Omsk through Astana, and not only by aircraft but also by train, and even by bus. This option is especially advantageous for tourists from the Eastern countries. The airport is connected with the city with several bus routes, one of them leading to the train station. The travel by train from Moscow to Omsk will take 2 days, 4 hours, on average.

Cafes, bars and restaurants in Omsk 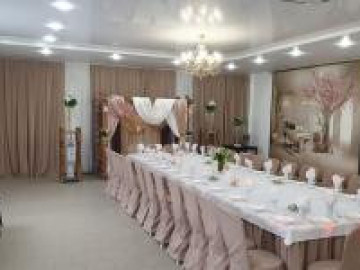 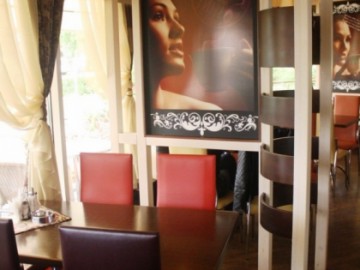 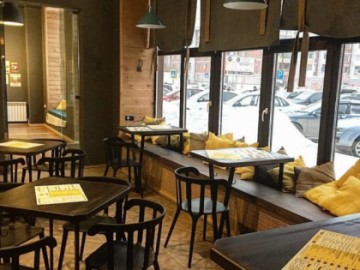 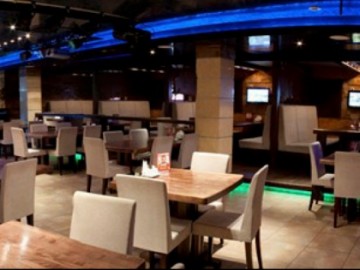 Places of interest in Omsk 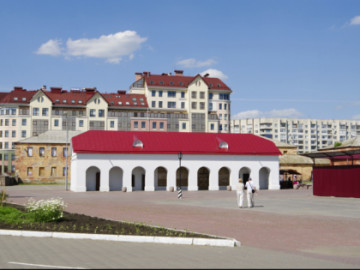 OmskFortress
Museums and Exhibitions • Other places 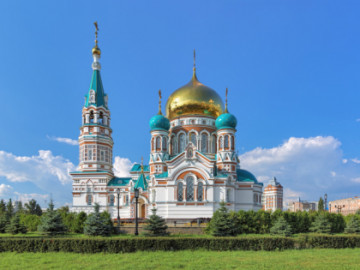 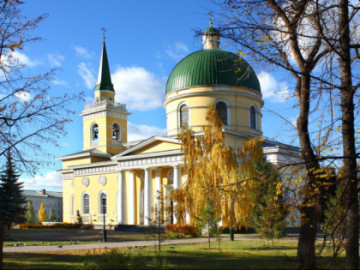 St.NicholasCossackCathedral
Architectural Monuments • Other places • Temples and places of worship • Cathedrals and churches 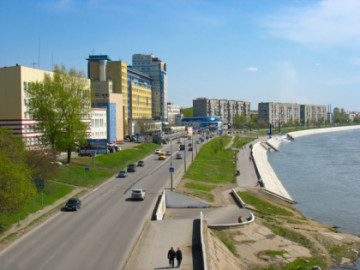 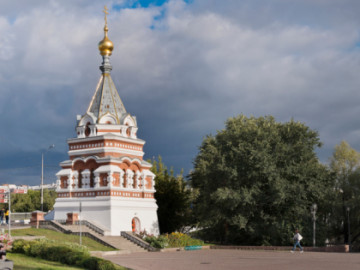 SeraphimAlekseyevskayaChapel
Other places • Temples and places of worship • Cathedrals and churches 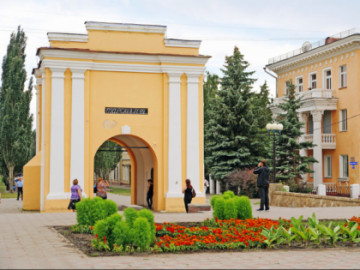 Tara Gates: Where Wishes are Granted 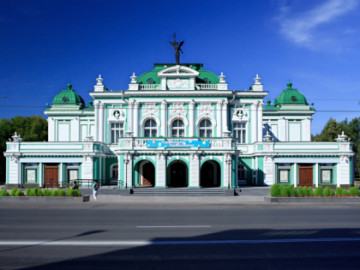 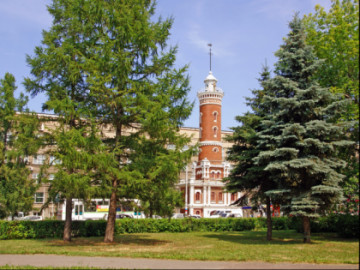