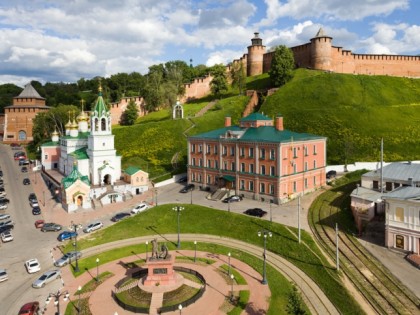 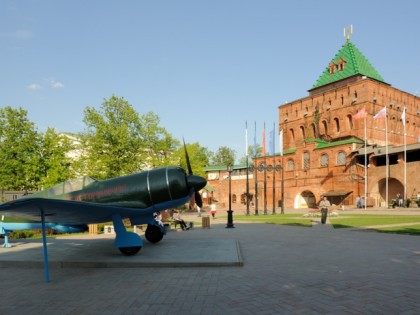 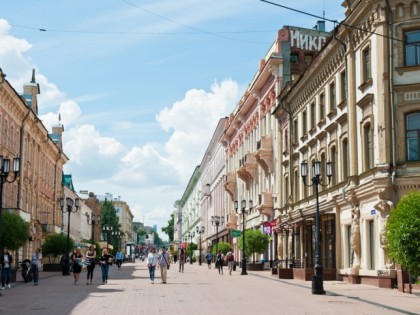 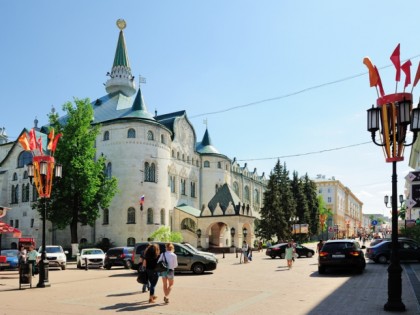 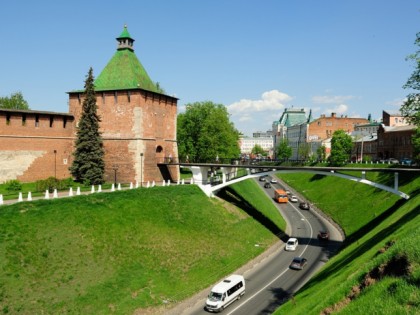 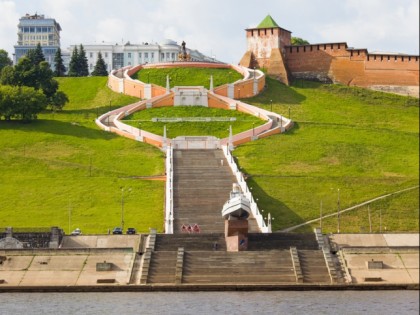 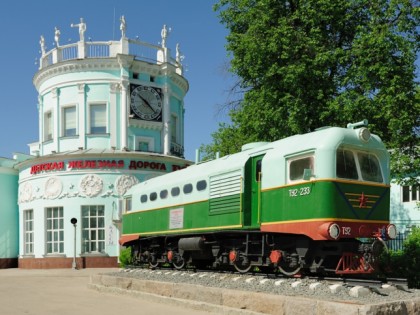 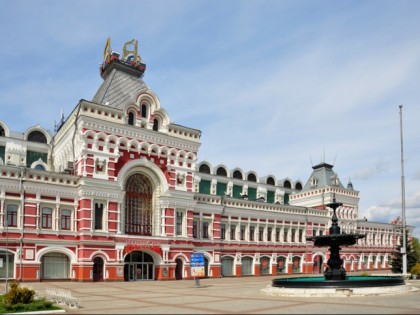 Nizhny Novgorod or Russian Leipzig on the banks of the Volga

The trade capital of Russia, the city with a million inhabitants, the fifth largest city in the country is Nizhny Novgorod, an old merchant city with fair traditions. It grew and developed thanks to the efforts of merchants who traded on the Oka and the middle Volga. Coincidentally, it was named in honor of Novgorod — the northern merchant city which was part of the Hanseatic League in the Middle Ages. The last three hundred years Nizhny Novgorod is the capital of the Russian private enterprise, the Russian Lyon or Leipzig, the «pocket» and the third capital of Russia.

Nizhny Novgorod was founded in 1221 by the Vladimir Prince Yuri Vsevolodovich. The wooden fortress at the confluence of the Oka and the Volga was erected as a bastion in the southeast of the Slavic lands. Since the entry of Nizhny Novgorod into the Moscow State they often started using the city as a stronghold for concentration of militia for the eastern campaigns of the Moscow princes. A large-scale stone Kremlin was built here in the period from 1500 to 1518 and has never been taken. At the same time it turned out that Nizhny Novgorod is located in an exceptionally convenient place for trade and river navigation. And here they started actively developing trade with the South-Volga lands. And the first merchant families started distinguishing themselves in the city.

One of the most striking pages of the history of Nizhny Novgorod is the formation of the militia, which was assembled by Nizhny Novgorod butcher Kuzma Minin. He headed the militia troops for the liberation of Moscow during the Polish intervention in 1612. As you know, an allegorical monument to Minin and the second leader of the militia Prince Pozharsky stands on Red Square in Moscow. And a high obelisk is installed in Nizhny Novgorod in memory of them. There is also a monument to Minin on the Pozharsky and Minin Square in the city. The role of the city residents in liberating Moscow during the Time of Troubles of the early 17th century only strengthened the authority of Nizhny Novgorod.

The holding of the fair gave impetus to the development of urban architecture. The title of the third capital of Russia set a new benchmark for urban construction. The quaint mansions of the merchants, the rich decoration of the churches, the trendy banks and shops buildings that appeared on Bolshaya Pokrovskaya Street at the end of the 19th century, much of the legacy of that happy time still determines the architectural image of the city center.

The revolution of 1917 put an end to the reputation of Nizhny Novgorod as the commercial capital of the country, but gave impetus to its industrial development. In 1932 Nizhny Novgorod was renamed Gorky. This name was chosen in honor of the proletarian writer Alexei Peshkov, who spent his childhood in Nizhny Novgorod and later took the pseudonym Maxim Gorky for himself. The reverse renaming of the city happened in 1990.

During the Soviet period the city became a major industrial center. GAZ cars were produced in Gorky, ships and submarines descended from the stocks of the Krasnoye Sormovo plant, and the Sokol aircraft factory produced famous MIG bomber-fighters. The defense specifics of many enterprises in the city, however, made it impossible for foreigners to visit it. Till the middle of the 1980s Gorky was a «closed city». Nevertheless, the city actively developed as a center for domestic tourism. From May to September Gorky was visited by thousands of tourists arriving here on river ships along the Volga and the Oka. And nowadays many people in Russia choose this type of travel to visit the old Russian city. Those who arrive in Nizhny Novgorod seek to visit the ancient Kremlin, see the giant Lenin Square with a monument to the leader of the world proletariat 17 meters high. Many people come here to see the amazing churches that have been preserved and ride on a ropeway that crosses the Volga between Nizhny Novgorod and the suburbs of Bor. The ropeway was put into operation in 2012. It is unique as it has the largest in Europe unsupported flight over the water — 861 meters! The entire ropeway is supported by 10 pillars.

Nizhny Novgorod left its mark on the gastronomic map of Russia too. The many hours tea drinking of merchants of Nizhny Novgorod during the fairs entered the Russian folklore. As a rule, the prolonged gatherings of merchants for the samovar were accompanied by eating pancakes with a variety of fillings: caviar, fish, and sour cream, jam and so on. One can find pancakes almost in any restaurant of the city today as well. For their part, the Volga and the Oka determined the «fish» orientation of the local cuisine. People in Nizhny Novgorod liked ukha — a rich fish soup very much since the earliest times. But they cooked it in different ways. Yellow ukha was cooked from sterlet, pepper was added to white ukha, and saffron was added to the red ukha and cloves to the black one. There was also a sweet ukha — it was made of ruff. The second often served dish was a fish loaf — large fish cutlets cooked with the addition of spices and herbs.

In 2018 the city takes matches of the World Cup. The Nizhny Novgorod Stadium, reconstructed to this event, accommodates 44 thousand spectators.

One of the most successful cities in Russia Nizhny Novgorod almost always finds itself in the top of the Russian rating on the quality of life and the development potential. In recent decades it is actively developing as a center of the IT industry. In particular, Intel has placed its branch here. All of the leading IT companies in Russia have their representative offices in the city. So the «pocket of Russia» once has every chance for becoming its «brain».

One can get to Nizhny Novgorod from Moscow in several ways. The most convenient of them is the high-speed train Lastochka, which in just 4 hours will take a traveler from Moscow to the Volga bank. The train leaves from the Yaroslavsky railway station of Moscow. In addition, regular trains as well as planes that fly from all airports of Moscow are available to tourists. 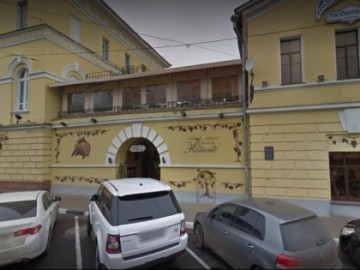 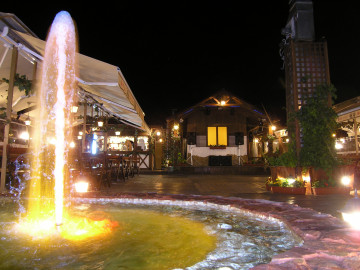 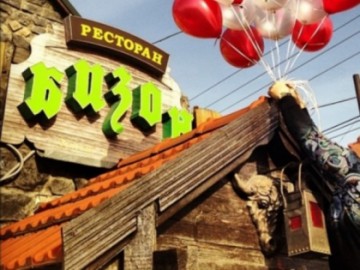 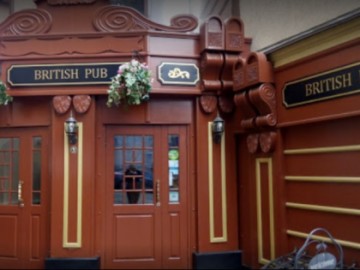 Places of interest in Nizhny Novgorod 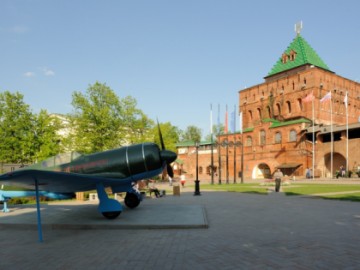 Nizhny Novgorod Kremlin: a walk on the walls of an ancient fortress 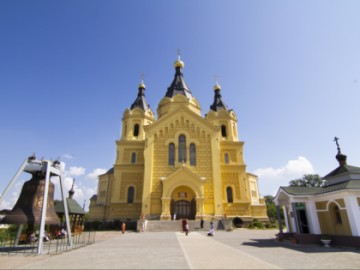 Church of the Holy Prince Alexander Nevsky or the Yarmorochnaya Church 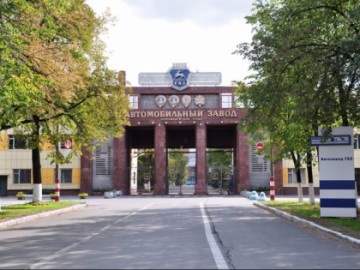 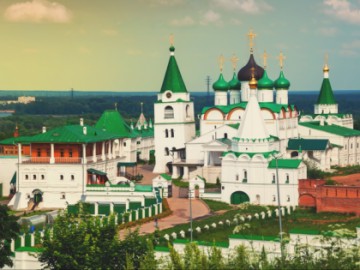 Pechersky Ascension Monastery: the history of the monastery under the mountain 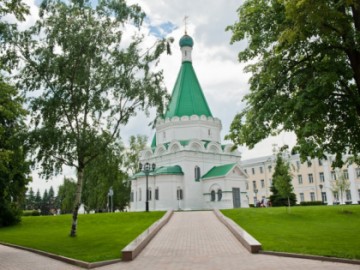 The Michael the Archangel Cathedral 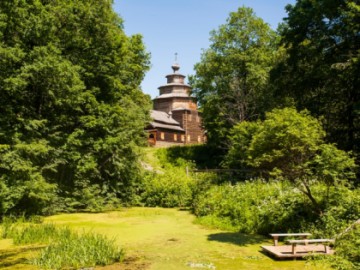 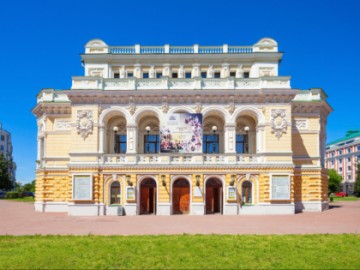 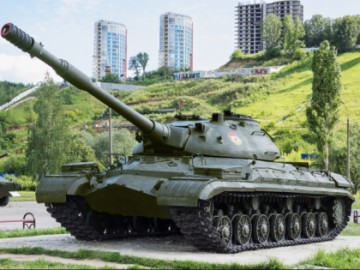 Victory Park: tanks and dugout as a reminder of the war

Nearby
Cities near Nizhny Novgorod
Ivanovo