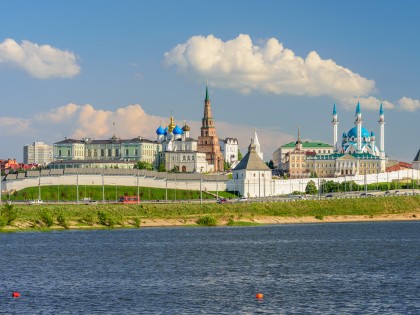 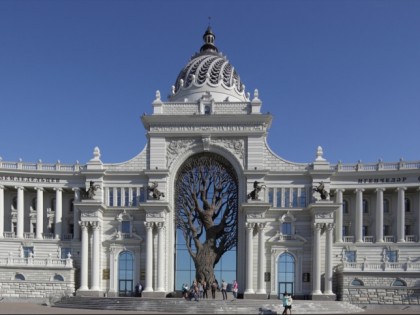 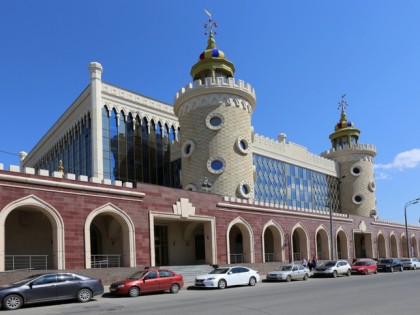 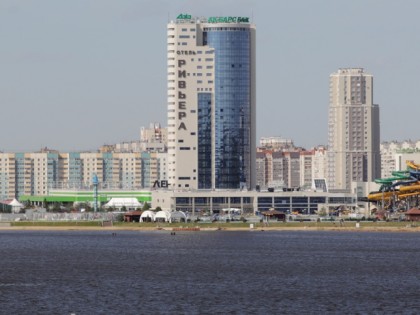 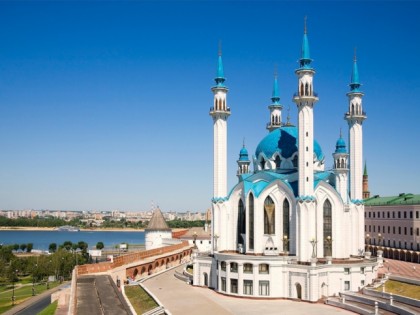 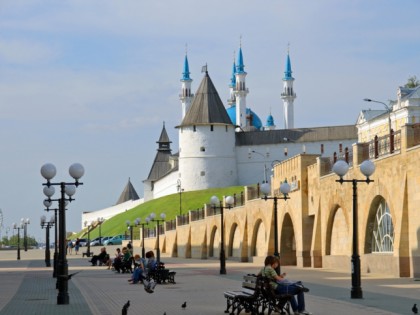 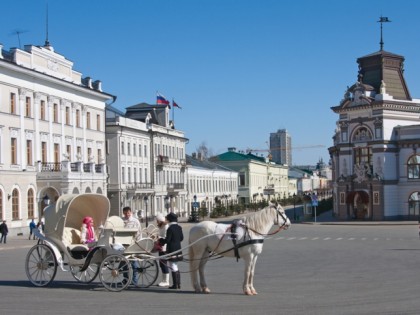 Kazan: the third capital of Russia

In 2005 Kazan became one thousand years old. Kazan is a cocktail-city in which Islam and Orthodoxy, East and West, old and modern were mixed. Here the minarets of the mosque rise next to the Orthodox church, and the long-standing Kremlin and the Kazan skyscrapers look at each other from the opposite banks of the Kazanka River. For many years Kazan is included in the top list of the most popular tourist destinations in Russia. People come here to enjoy a stunning architectural variety, ride a steamer to the ancient island of Sviyazhsk, buy souvenir Kazan cats and taste delicious ech-pochmak and a real chak-chak.

The city-fortress Kazan was founded on the northern borders of the Volga- Bulgaria — the first Muslim state in Eastern Europe. In the 15th century Kazan was captured by the Mongols who made the city the capital of the Kazan Khanate and introduced it into the Golden Horde. During this period Kazan became known as a major shopping center, and the arms business, tanning and pottery were prospering there. However, in 1552 the city was occupied by the troops of Ivan the Terrible. Since then Kazan has appeared on the map of the Russian state, and Staro-Tatarskaya Sloboda (Old Tatar Settlement) in the city was defined as a single area of ​​residence for all Tatars. The Sloboda has survived to our days and now it is a wonderful historical area, wandering around which one can make out an idea of ​​the life of people here in the 16th-17th centuries. The stone Kazan Kremlin, the construction of which dates back to the mid-16th century, was an equal participant in the life of that time.

In 1708 the city became the center of the Kazan province, a leather factory, a cloth manufactory and an admiralty were built there. Kazan was developing rapidly: the city had its own university, electric lighting, trams, telegraph, and a railway linking Kazan with Moscow. After the Great Patriotic War a river port and an air terminal were built in Kazan. And in 1990 the city received the status of the capital of the Republic of Tatarstan.

Today Kazan is called the third capital of Russia. It is a large tourist center with an amazing complex of the Kazan Kremlin, which is included by UNESCO on the World Heritage List, with one of the largest mosques in Europe Kul-Sharif and a unique Temple of All Religions that reminds you of the architecture of Antonio Gaudi. In addition, tourists are also attracted by the ensemble of buildings on Freedom Square: the Kazan City Hall of the mid-19th century as well as the Kazan Conservatory, the Tatar State Opera and Ballet Theatre named after Musa Jalil and Saydashev State Grand Concert Hall with one of the best organs in Europe.

Kazan is also a powerful sports center. In 2013 the Universiade was held here, the World Aquatics Championships 2015, and 2018 FIFA World Cup is being held in the city: four games of the group stage, 1/8, as well as the quarter finals of the mundial. The World Cup is being held at the Kazan Arena stadium opened in 2013 which can accommodate over 45 thousand people. A special pride of the stadium is a giant media facade with an area of ​​more than four thousand square meters, which broadcast the main matches of the championship. This is the largest display of its kind in Europe. In addition, the Kazan Arena stadium is the only one in Russia where there is free Wi-Fi. The museum of the stadium and an exhibition of retro cars also function here.

Gastronomic Kazan is no less attractive than the historical or sports one. Tatar cuisine, which absorbed Muslim and Orthodox culinary traditions, is very original and interesting. In Kazan there are dozens of places where one can try authentic Tatar dishes. For example, it is worthwhile to find a rich and tasty broth with potato-meat pie eleksh, to taste the dishes of horse meat. The hearty beshbarmak — a dish of nomads, which is eaten by hands, is also mandatory. It is a lamb broth with thinly sliced ​​meat, pieces of dough in butter, potatoes and onions. The Tatar cuisine is also famous for its varied pastries. Traveling to Kazan is impossible without tasting all kinds of ech-pochmaks — triangular pies with chicken, lamb, goose or beef. It is impossible to pass by the honey sweetness — chak-chak (made of dough and honey). To eat it all is better with a fragrant herbal tea with dried apricots and tiny rolls of tatla made of fruit and berries paste and butter cream.

Kazan holidays attract a huge number of tourists to the capital of Tatarstan. The high society audience, for example, appreciates the annual festivals of opera singing, like International Opera Festival named after Feodor Chaliapin held in February and International Kazan Autumn Open Air Opera Festival held in August. The latter, by the way, is organized directly under the open sky at the pompous Agricultural Palace. Once in Kazan, it is worth to visit the national Tatar holiday of the end of the sowing campaign «Sabantuy». At this May festival one can eat plenty of ruddy ech-pochmaks, buy skullcaps and try to win a ram in wrestling competitions. In addition, every year in June the festival of contemporary music by Igor Butman «Kremlin Live» takes place on the territory of the Kazan Kremlin, and folklore and ethno festivals «Karavon» and «Krutushka» are held in the summer.

Many-faced Kazan is an incredibly hospitable city. It seems to have been created for walks: every stone here is history, every building is a masterpiece. In combination with ultramodern illuminations and a lot of stunning fountains and well-kept squares and lawns the city makes an absolutely incredible impression. And having drunk herbal tea and having eaten rolls of tatla, one wants to get around all the shops in Baumana Street and buy all kinds of dressing gowns, skullcaps and figures of Kazan cats, which still remind of Empress Elizabeth Petrovna. According to the legend, it was she who asked to send cats from Kazan to her Winter Palace in St. Petersburg for catching mice.

The fastest way to Kazan is using an airplane. The local airport is considered to be one of the largest ones in the country and is connected by regular direct communication not only with Russian, but also with large foreign cities. More than ten flights a day are made from Moscow to Kazan. The flight takes only an hour and half. The flight to Kazan from St. Petersburg lasts 2 hours and 20 minutes. One can also use the railway, as dozens of passenger and corporate trains pass through Kazan. The high-speed train «Tatarstan» travels from Moscow to Kazan only 10 hours, and the regular train — about 20 hours. From St. Petersburg the train takes about 22 hours. Another the most relaxed way is on a cruise ship along the Volga. Such a trip with stops in other Volga cities lasts for two weeks.

Cafes, bars and restaurants in Kazan 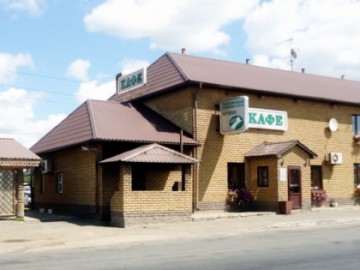 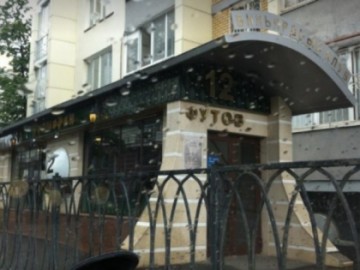 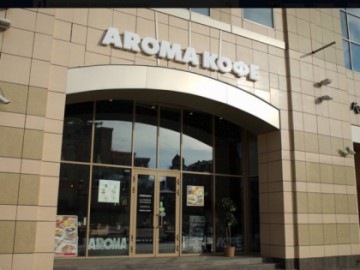 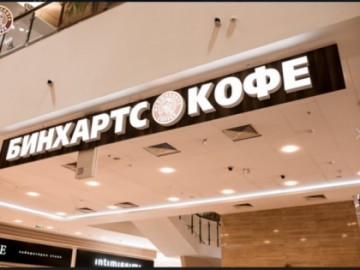 Places of interest in Kazan 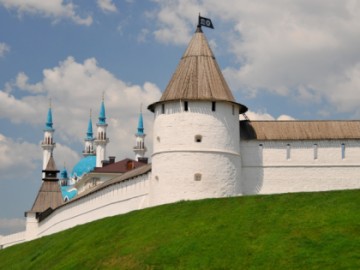 Kazan Kremlin - the spiritual and historical center of the city 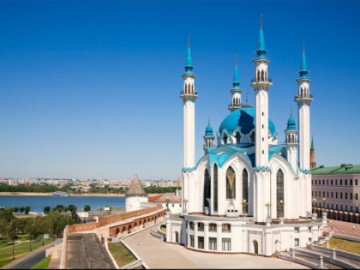 Kul Sharif Mosque: a return to the 16th century 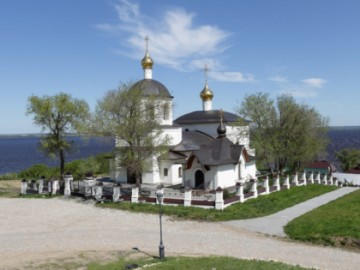 Sviyazhsk: an island-town with ancient monasteries 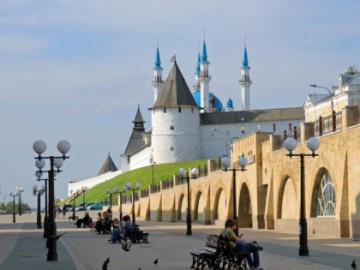 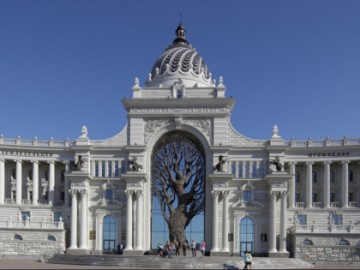 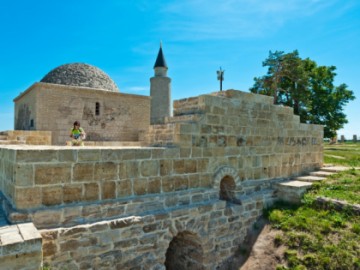 Bolgar Historical and Archeological Complex – the native land of the Tatarts 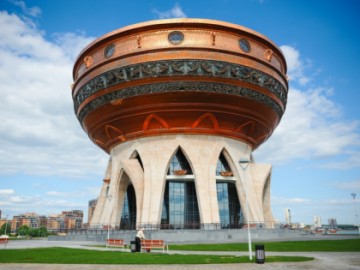 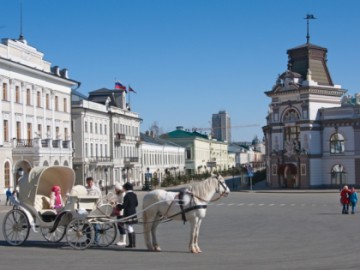 National Museum of the Republic of Tatarstan

Nearby
Cities near Kazan
Ulyanovsk