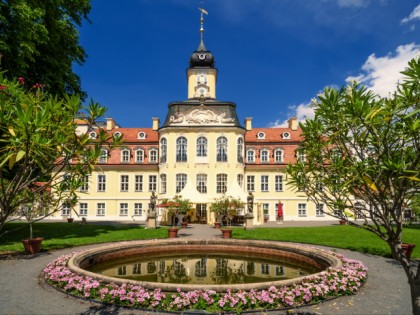 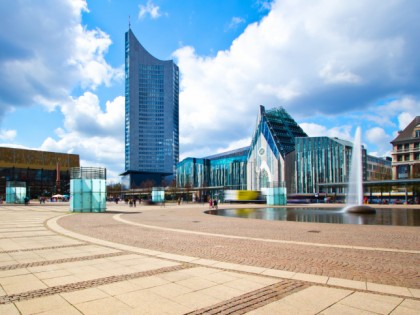 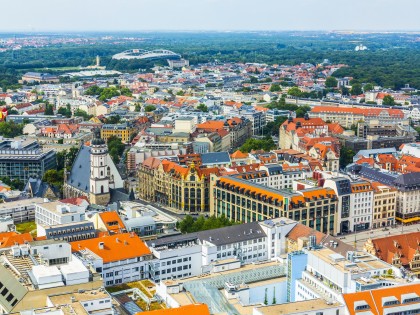 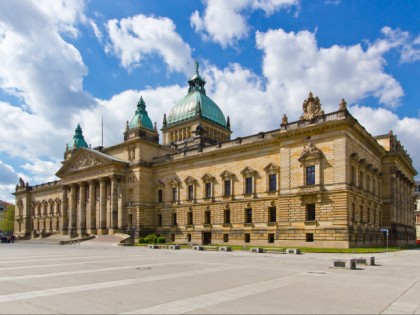 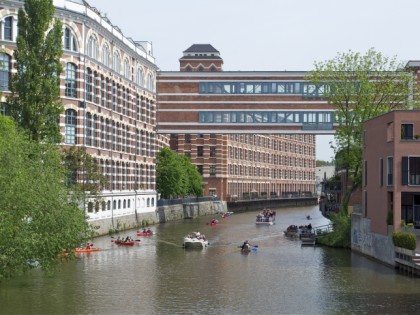 «A planet in miniature», «the little Paris», «the city of fairs» - how many names have been bestowed to Leipzig! In his streets trotted Bach, Goethe, Leibnitz and Herz. Under Leipzig Napoleon Bonapart suffered a defeat that was considered world's greatest battle even a hundred years later. A tourist must listen to an amazing boys’ choir in St Thomas's church, eat a «Leipzig lark» and pay a visit to the house of Felix Mendelssohn to learn about a complicated life of the author of the famous wedding march.

Leipzig was the second largest city of the former GDR in size, as in status. Nowadays this is the largest city in Saxony, with population of 552 thousand people. According to a 2014 poll, Leipzig was one of the most comfortable cities to live in Germany.

The first written record mentioning Leipzig dates back to 1015. Some Slavic tribes lived here, so the name of the city had Slavic roots: a thousand years ago it was called Lipsk, or “a city under the Linden trees”. The process of Germanisation of the city's name was gradual, from Lipsk through Liptzik to Leipzig, while the rapid growth of the city was due to its convenient location at the crossroads of two European trading routes, laid out by the Romans. Already in 12th c. there was a busy Leipziger Messe that is considered the world's oldest and is held to this day, in spring and in autumn.

Leipzig is also called Buchstadt, or “a city of books”. From 17th c. here is held an annual international book fair, the second of its kind in popularity after the main book fair in Frankfurt. In Leipzig it makes a part of the Leipziger Messe in mid-March. Thanks to this, Leipzig is also often called Messestadt, or “a city of fairs”. Apart from fairs, Leipzig hosts the annual Wave-Gotik-Treffen, Europe's largest Gothic music festival.

A special place in the city's life occupies the university that was founded at the beginning of 15th c. Within its walls worked the philosopher and mathematician Leibnitz, the physicists Herz and Heinzenberg, the historian Mommsen, and the poet Goethe. The latter wrote thus about Leipzig: «It is a little Paris: it gives its folk a finish». As a matter, in certain respects Leipzig had once indeed competed against Paris. For instance, it was in Leipzig that the first European daily newspaper had been published. The city was also the starting point of the first modern railroad in Germany. As for Napoleon, he suffered one of his most striking defeats under Leipzig. The famous Battle of the peoples in 1813 saw a complete defeat of the French by the allies' forces. Nowadays the monument to those who died in the battle is one of mandatory stops on a tourist's itinerary.

It is also impossible to miss the cathedral of St Thomas. One of the traditions the cathedral is truly proud of is the amazing boys' choir, Thomanerchor. Johann Sebastian Bach, the famous composer, had been its choirmaster for 27 years; his work still make the bulk of the choir's performance program. To Bach's memory is also dedicated an annual festival of classical music.

Even a local dessert, Bachtaler, has been named after the composer. This is a creamy cake covered in chocolate and decorate with a coffee bean on top. Another delicacy is a Leipziger Lerche, a sweet butter shortbread with raisins and almonds. Its origins date back to 1878 when in 1878 bird catching was banned in the city outskirts. Likewise, every German citizen is familiar with Leipzig Allerlei that can be translated as “Leipzig  Stuff”. This is a vegetable stew with carrots, cauliflower, asparagus, small crayfish and bread dumplings. The legend has it that this homely dish became popular with the locals in the famine years that followed the Napoleonic wars. Historians, however, disagree because the first mention of Leipzig Allerlei is dated by 1755 when Napoleon hadn't even been born yet. The high-fermented local beer, Gose, is brewed from wheat. It is served mostly in Leipzig's pubs, the most famous of them is “Ohne Bedenken”. The beer is consumed on its own and in cocktails. Another local drink, Leipziger Allasch, This beverage contains thyme, sugar and 38% of alcohol and is usually drunk after a nice dinner.

Leipzig is wonderful to take a walk. For instance, to study the musical history of the city one may follow the “note path” - special street signs that mark all places where composers lived or performed. A journey along the path will take around two hours. A culture walk will include the Museum of the Fine Arts (Museum der bildenden Künste) and the Grassi Museum (Grassimuseum), founded by an Italian. The Leipzig Zoo should also be mentioned as one of the most beautiful zoological gardens in Europe. Its primate division is the largest in the Old World.

Nothing in Leipzig today reminds of the dull period of the social realist GDR. The German writer Gotthold Ephraim Lessing thus said about the city: “I arrive to Leipzig – the city that represents our entire world in miniature”. Come to Leipzig to see for yourself if he is still right today.

Cafes, bars and restaurants in Leipzig 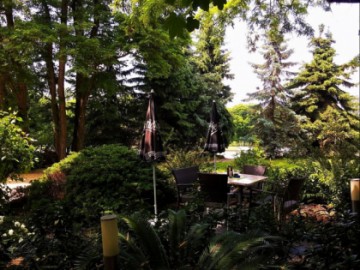 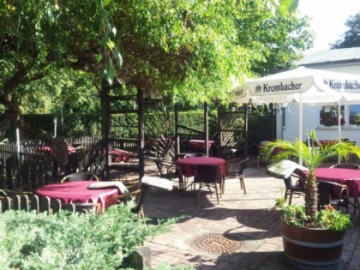 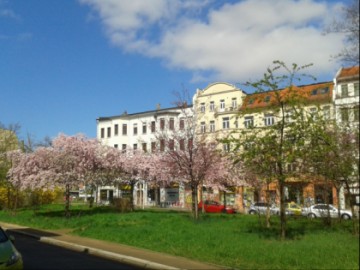 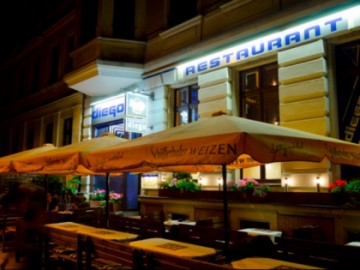 Landmarks in the city Leipzig 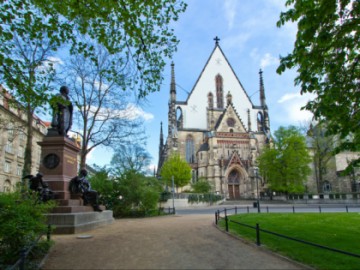 Leipzig
The Cathedral of St. Thomas and Thomanerchor
Architectural Monuments

The Cathedral of St. Thomas and Thomanerchor 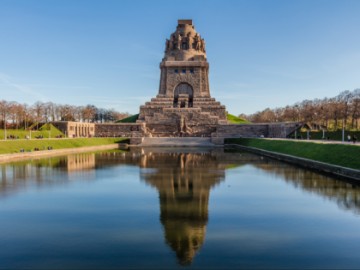 The Battle of Peoples monument and 500 Steps 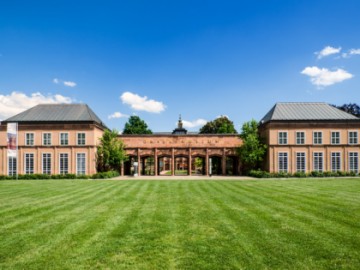 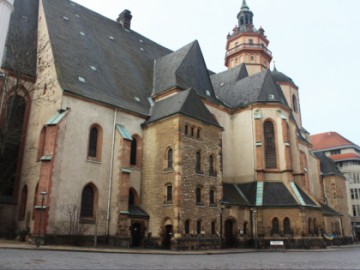 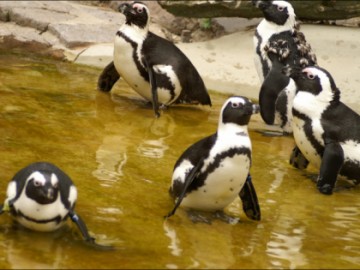 Leipzig Zoo “grown out” of a restaurant 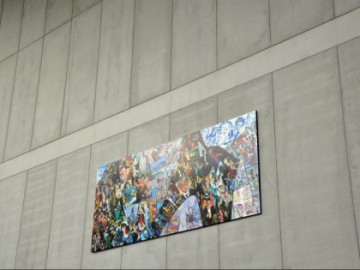 Leipzig
The Museum of the Fine Arts
Museums and Exhibitions

Arts patrons founded the Museum of the Fine Arts 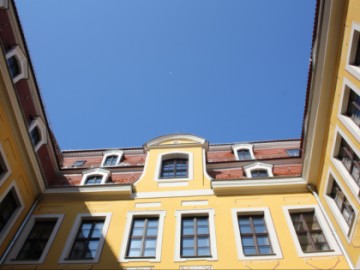 Bach's Museum in the house of the Bose family

Leipzig
The house of Mendelssohn
Museums and Exhibitions

The house of Mendelssohn: the wedding march and the sad fate of its composer