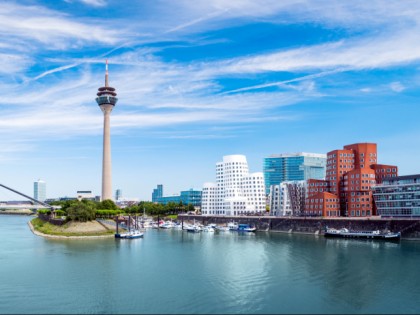 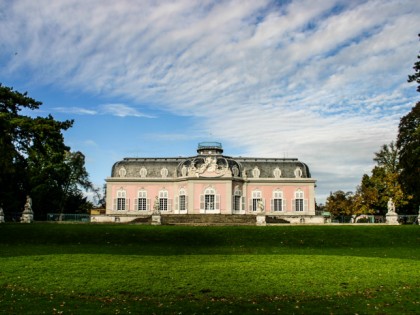 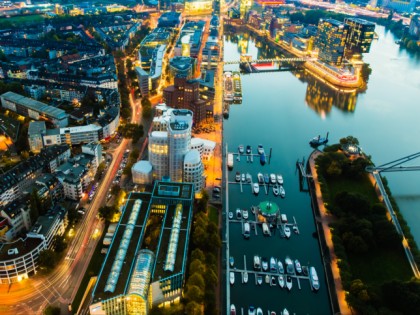 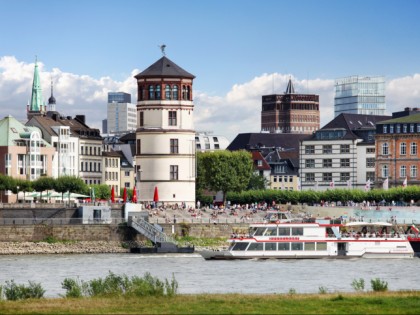 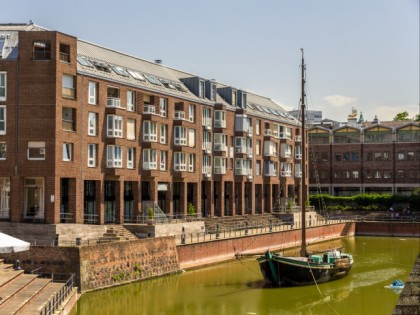 Duesseldorf is considered one of the most affluent cities in Western Germany, as well as its money source and exhibition centre. Here one should, among other things, take a walk down the famous Royal Alley, sail on the Rhein, enjoy a pint of beer at the world's longest bar stand, have a photo taken with Radschleger and climb to the top of the Rhein TV tower.

Duesseldorf is Germany’s seventh most populated city and the second largest city of the Ruhr Area. This business and cultural centre of Western Germany is often called “Ruhr’s writing desk”. It was first mentioned in 1135 as a village at the confluence of the Duessel River into the Rhein. In the Middle Ages the town became the capital of the Duchy of Berg, and at the end of 14th c. under the Elector Johann Wilhelm it began to grow rapidly. The Elector’s equestrian statue is now one of the main city attractions. Further, in the course of wars and conflicts, Duesseldorf had changed hands several times. At one point it even belonged to Napoleon Bonaparte, whose name was given to one of the boulevards, subsequently renamed after Heinrich Heine, the most famous native of Duesseldorf.

The rapid economic growth of the Rurh Area at the end of 19th c. provided a mighty stimulus to the development of Duesseldorf. On the eve of World War Two there lived more than 1mln people, nearly as many as nowadays. In the second half of 19th c. the city was developing exclusively as a financial and economic centre. Here are based the headquarters of such German corporations, as a telecom company Vodafone, a chemical company Henkel and a large global retailer, Metro AG. The local exhibition centre, Dusseldorfer Messe, is considered one of the largest in Germany. One fifth of all European exhibitions takes place in Duesseldorf.

The symbol of the city is a Radschleger, a somersault-maker. An eponymous sculpture appeared in 1954 in Burgplatz. A somersault-making acrobat has many legends about it. One tells how in 1288 the local count Adolf defeated his adversary, the Archbishop of Cologne. Upon hearing the news, the children began celebrating the victory by making somersaults. Thus a somersault-making has become the way to celebrate the city's happiest and most important events. Another legend refers to a wedding of a local feudal lord when the groom's coach had accidentally lost a wheel, and a boy who tried to save the situation turned over a few times, holding the axle.

The Rhein Embankment with its string of cafes, bars and restaurants has acquired the name of Europe’s longest bar stand. Along the river there are over 200 establishments that serve beer and all sorts of food, including popular local dishes, like Blutwurst, or black pudding. Thanks to different spices, it has got a very special taste. Blutwurst is also a part of the local dish called “Heaven and Earth”, although in Duesseldorf they call by its Dutch name, Himmel un Ääd. This is a mashed potato with an apple mass and pieces of pudding, garnished with caramelized onion rings. Another popular dish is Kartoffelpuffer  - thin slices of potatoes fried in oil. Local restaurants also serve Halve Hahn (“half a hen”, literally), an assortment dish that includes a blackcurrant pie with a piece of cheese, onion rings, slices of pickled gherkins and sauce. Whatever is the dish that citizens and visitors to Duesseldorf may be enjoying, they always accompany it with beer. The most popular is the local variety, called Altbier («old beer»). Despite historical tensions with Cologne, they quite like the adversary’s sort, Koelsch.

The Royal Alley is the city's main thoroughfare and one of the most affluent streets in Germany, thanks to nearly all banks and shops being located here. Due to a myriad of shops that sell the latest fashion staples, Duesseldorf is often called Germany's fashion capital. Some of the most peculiar city sights are the old castles that had once belonged to the local feudal lords. And while Duesseldorf castle has but one tower left to admire, such places as Kalkum, Benrat and Heltorf are quite well preserved and attract visitors with exhibitions and splendid interiors. History fans can explore the ruins of Keiserswert, the former residence of the Holy Roman Emperors.

However, all this are but glimpses of the bygone days. The contemporary Duesseldorf is epitomised in the Medienhafen, a city quarter developed in 1990s. To create a space to live and work in the place of the former haven Germans invited the world's best architects. Offices, headquarters of newspapers, magazines and TV companies, restaurants and night clubs have been given such extraordinary buildings that today people visit this quarter as if it was an open-air museum. The best view of the Medienhafen opens from the top of the Reinthurm TV tower. They say that on a good day one can see the neighbouring Cologne from the tower's observation deck. One of the most unusual museums here is a mustard museum where they hold regular tasting sessions. And still, this is not all: there are a marine zoo, a Palace of Arts museum, a Heinrich Heine museum... One thing is certain: Dusseldorf will instill you with truly indelible impressions.

Cafes, bars and restaurants in Duesseldorf 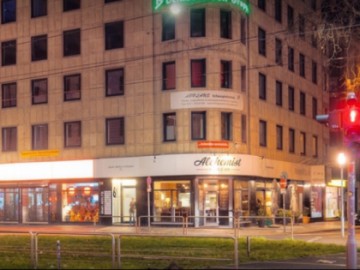 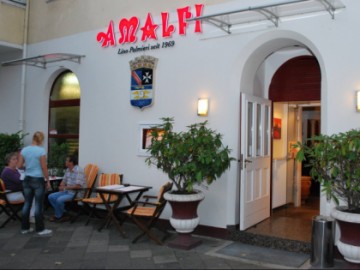 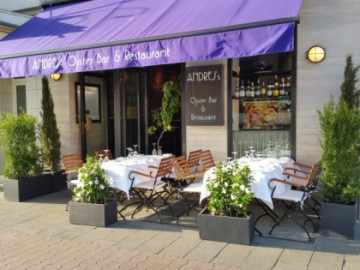 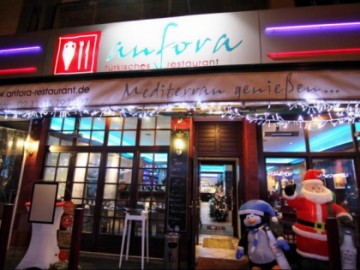 Landmarks in the city Duesseldorf 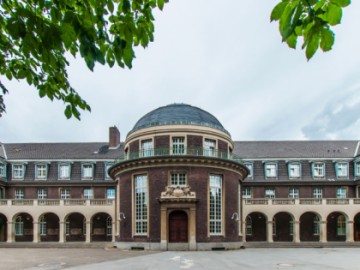 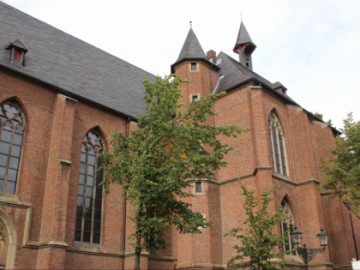 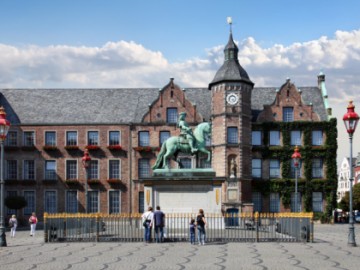 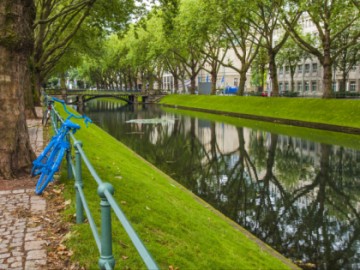 From Chestnut Alley to Konigsallee 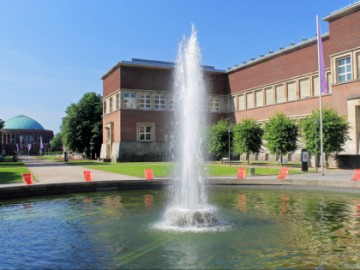 The Arts Palace: from the Elector's collection to an interactive display 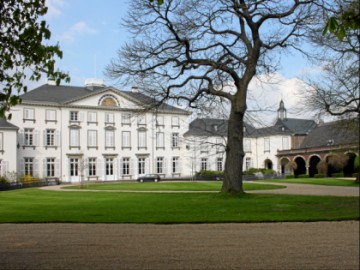 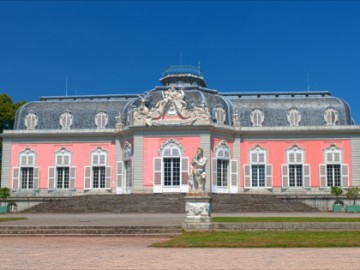 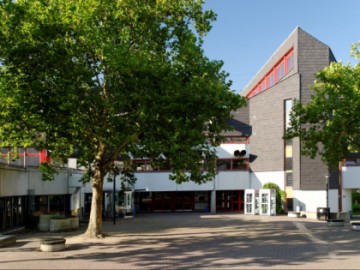