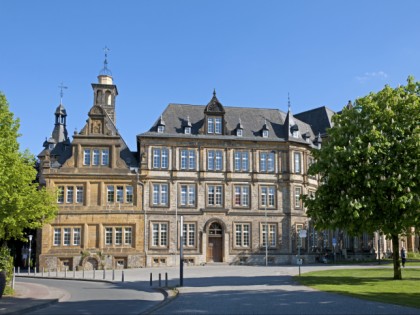 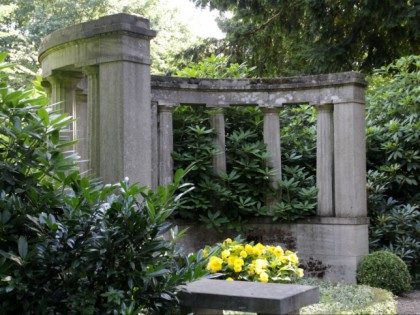 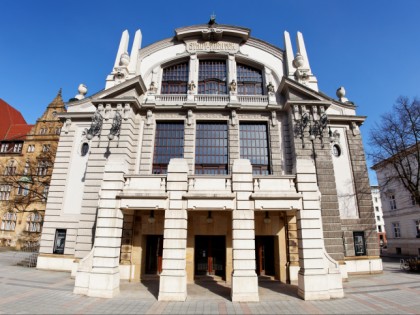 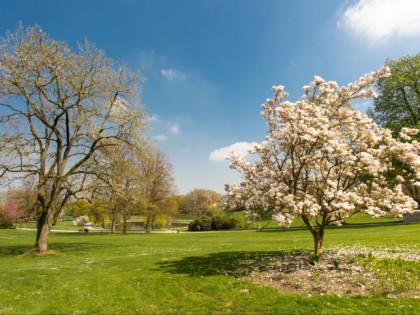 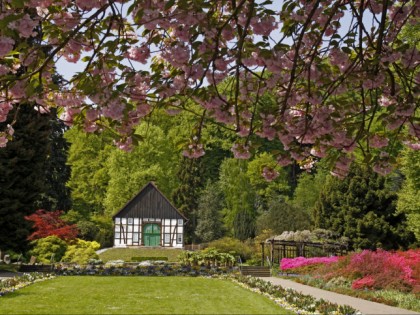 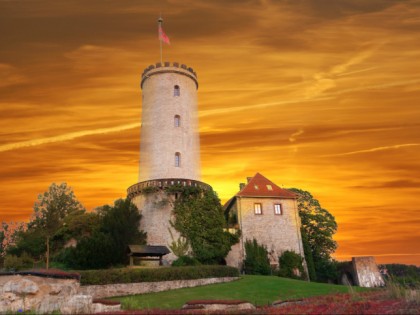 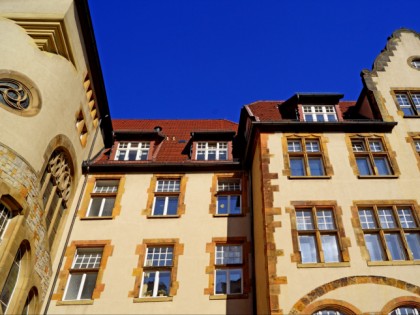 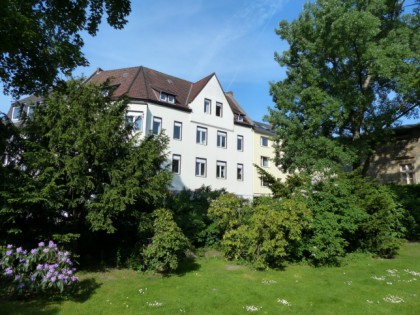 Bielefeld – a city that exists!

Times and eras have all mixed up in the provincial Bielefeld. On the one hand, in a town with 800 years of history, located at the foot of Sparrenburg fortress in the thick of Teutoburg Forest, medieval spirit reigns. You can feel it watching gothic spires of churches and tracery façades of old houses. On the other hand, modern and active life boils in Bielefeld: two large universities stand next to the country-wide known medical centre. Hundreds of people come here every day. Among them are those who want to disclose the so-called Bielefeld conspiracy – an internet meme, according to which this town does not exist…

Bielefeld appeared on the map of medieval Germany in 1214. Earl Hermann von Ravensberg is considered its founder, having founded Sparrenburg fortress on a high hill surrounded by impenetrable Teutoburg Forest. A small town grew around the strong citadel gradually, which in the 15th century entered the trade Hanseatic League. At that time half of residents of Bielefeld were engaged in flax manufacture. Fabrics of local textile mills were purchased by merchants from England, Scandinavia and Baltic. In the 19th-20th centuries the local Ravensberger textile mill was considered one of the largest flax manufactures in Europe. Even today, when the local production of fabrics has considerably declined, souvenirs from flax are still very popular here. In memory of this part of the town history, a monument dedicated to weavers is erected in the town centre.

In the beginning of the 20th century Bielefeld became famous in the entire world, when doctor August Oetker invented and patented baking powder. By 1900 Oetker who owned a small drug-store built his first factory. By 1906 he had sold 50 million packets of the aerating agent! Nowadays “Dr. Oetker” brand is famous in the entire world, and a factory producing the baking powder still functions in Bielefeld. During daily excursions conducted in the factory you can see the famous patent, watch all stages of production and bake a cake with an old recipe.

When in Bielefeld, you are recommended to try out a traditional Westphalia dish Pfefferpotthast. It is cooked with use of beef with streaks of lard that is roasted with onions and spices and seasoned with capers and lemon juice. In summer this dish is served with boiled potatoes and salad, while in winter – with pickled cucumbers and beetroot. Besides, you will be served other delicacies of the local cuisine in Bielefeld restaurants, for example, Westphalia ham, freshly baked rye bread and wheat beer.

You can walk around historical centre of Bielefeld, including the market place (Alter Markt), the town hall building (Altes Rathaus) and several medieval churches, in just several hours. You should pay special attention to local museums, for example, modern art gallery Kunsthalle Bielefeld where artwork of the 20th and 21st centuries is kept. There is also a historical museum with a collection of old clocks, functioning spinning looms, belongings of workers of local textile mills and a whole tram.

Bielefeld conspiracy, invented in 1994 by a German student, is an urban legend of sorts. According to this satirical story, town of Bielefeld does not exist, and all mentions of it are nothing but a part of a world conspiracy. The internet joke turned into a meme soon after publishing and went far beyond the world network. In 1999 town council of Bielefeld made an official disclaimer of the conspiracy theory. It was stated in the disclaimer that Bielefeld exists (Bielefeld gibt es doch!). However the society was again convinced in the opposite, since the disclaimer was published on April 1. Today Bielefeld conspiracy attracts a considerable number of tourists who want to confirm personally the existence of this town.

Bielefeld’s main event is the annual medieval festival Sparrenburgfest conducted in the Sparrenburg fortress in July. In May Alter Markt hosts a handicraft fair Lieneweber-Markt where you can buy handmade souvenirs and participate in folk celebrations, street concerts and shows. In September Bielefeld invites everyone to a wine festival, while in December – to a traditional Christmas fair.

Provincial Bielefeld is a truly magic place. Boundaries between the present day and history as if do not exist. You can be surrounded by bustle of the small noisy market place, crowds of tourists at the House of Crüwell and Marienkirche, enjoy beer under lindens in a narrow street restaurant. And a moment later you will already disappear in the dark Teutoburg Forest, climb an unapproachable hill with a strong fortress and medieval bastions. And then you can only be sure of one thing – not only Bielefeld exists, it also attracts and charms you.

Cafes, bars and restaurants in Bielefeld 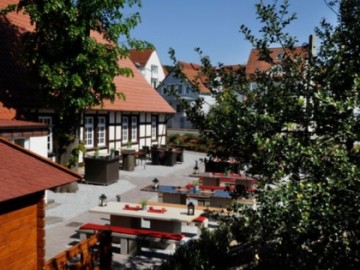 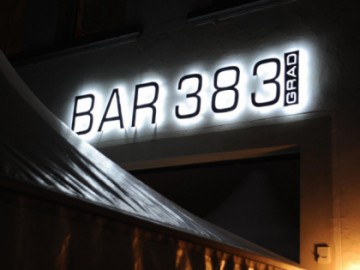 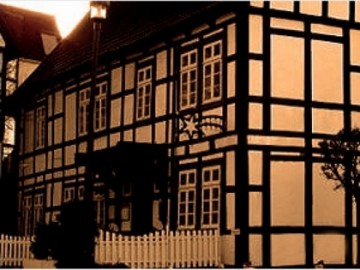 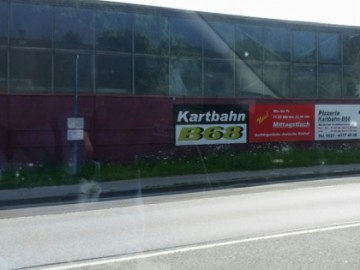 Landmarks in the city Bielefeld 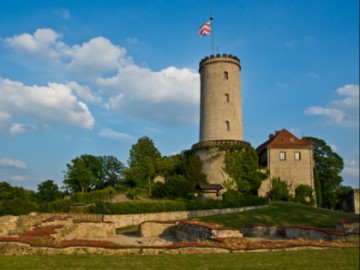 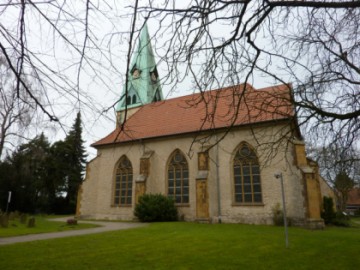 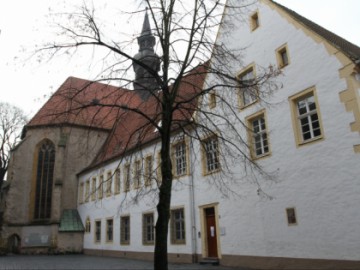 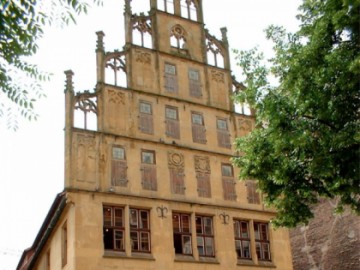 Crüwell House – the most beautiful building in Bielefeld 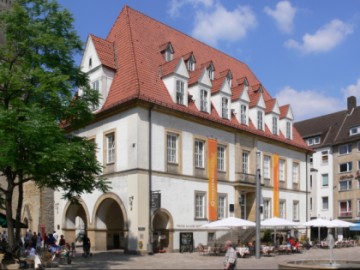 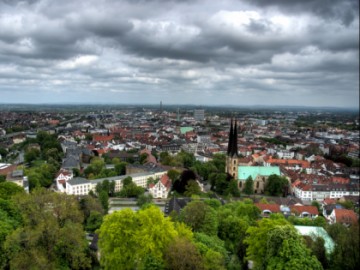