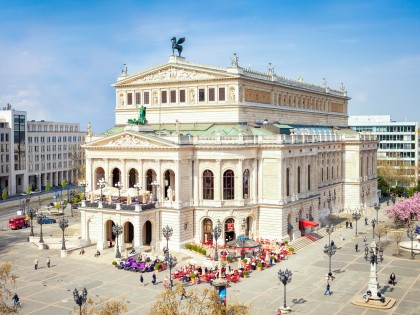 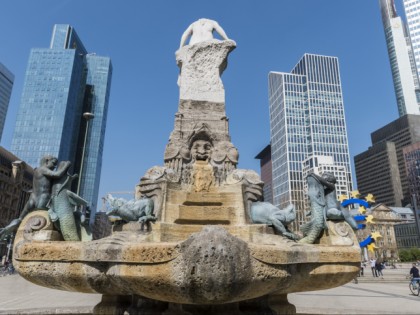 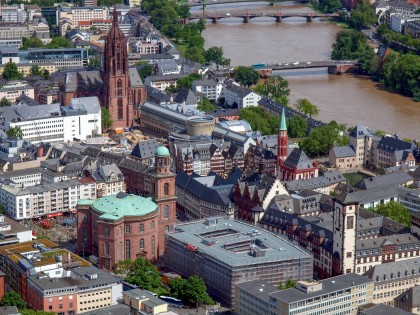 Frankfurt am Main – A City Without False Modesty

Frankfurt am Main (Frankfurt on the Main) is the largest city in the German state of Hessen (Hessen Land) and the fifth largest city in Germany. Of all the major German cities it, probably, fits the definition "city of contrasts" best of all. Frankfurt’s skyscraper skyline reminds of New York or Chicago. No wonder that one of the nicknames of Frankfurt is "Mainhattan", that is, Manhattan on Main. Once you stroll along the city center, the "gingerbread" houses of Römerberg remind that it is a city with a thousand years of history...

Frankfurt am Main is sometimes called "the secret capital city of Germany". The city inched closer to this status in 1949, when it received only one vote less than Bonn on the voting for the capital of the Federal Republic of Germany. However, Frankfurt is not hung up about it. Any story about it contains the word "the largest": the country's largest airport, the largest International Motor Show, the largest Book Fair... Moreover, Frankfurt am Main takes the seventh place in the world on the quality of living, that is the highest among German cities.

As legend has it, Frankfurt was founded in the VIII century A.D. by Charlemagne (Charles the Great). Retreating under the pressure of the Saxons, the king's troops were forced to stay on the Main riverside. The crestfallen Francs were saved then by a white deer which emerged from nowhere. The animal showed the place where the river could be forded. As soon as the Franks were on the other side of the river, the fog descended and the Saxons had to stop the chase. In a few days the backed up Franks conquered the enemy. In commemoration of these wonderful events Charles built a city in this place, called it Franconovurd (literally "Ford of the Franks"), and transferred there his court. However, archaeological excavations prove that the Roman settlements appeared there long before Charles... The political significance of Frankfurt in history can hardly be overestimated. It was here where German kings and emperors of the Holy Roman Empire were elected (and crowned since the XVI century) over the ages. Also, Frankfurt played a significant role in strengthening the trade power of Germany. The first documentary evidence of holding trade fairs in Frankfurt dates back to 1150! In 1240, Emperor Friedrich II granted an imperial privilege to the fair visitors meaning they would be protected by the Empire. In the late XVI century Frankfurt took another important step forward as a center of trade. Visitors from across Germany and Europe brought money of their states to the fair. To ensure fair trade and prevent cheating and extortion, in September 1585 the influential traders established a system of exchange rates for gold and silver coins. That particular event is considered the birthday of the modern Frankfurt Stock Exchange.

Today’s Frankfurt is on the world global cities list. At a time when the issue of mass immigration is painful to European countries, Frankfurt, instead, is proud to report that it is home to people of 180 nationalities. According to some studies, up to 40% of inhabitants hold foreign passports.

Due to fact that Frankfurt is a cosmopolitan city, dishes of any world cuisine can be found here. However, the local cookery can give a pleasant surprise as well. Consider, for example, the apple wine Apfelwein (it is called Ebbelwoi or Äbbelwoi in local dialect). You can taste it in one of the taverns, where there is a fresh evergreen wreath hanging over the door, indicating that fresh wine is served here. Apfelwein lovers say it not only perfectly quenches your thirst, but also reduces the blood cholesterol. Those who find the apple wine too strong, may dilute it with mineral water or lemonade. A culinary hallmark of Frankfurt is Handkäse mit Musik - a soft cheese made from cow's milk with rather a coarse flavor and specific taste. Comments from those who have tried it range from cautious "unusual" to the categorical "tastes like unwashed socks". However, the same is said about many famous cheeses. So you better taste it by yourself. Most often the cheese is served as a separate starter, sprinkled with chopped onion and caraway seeds. And what about the music, which the name implies? A more decent (and less probable) version says that a sound of glass bottles with vinegar and butter, served with the dish, is meant by "music". But there is also a plausible explanation: musik is just an euphemism for the sounds your stomach will emit after you eat the cheese, and besides with a raw onion! Despite such a mixed reputation, Handkäse has a lot of fans. Another popular local dish is a green sauce (Grüne Soße). It is believed that Johann von Goethe was most fond of it. The sauce contains seven fresh herbs (they may vary depending on the season and the restaurant), boiled eggs, oil and vinegar. It is usually eaten with boiled potatoes, hard-boiled eggs and brisket of beef, and less often with fish, roast beef or barbecue. In many Hessian families Grüne Soße is an essential part of the meal on Holy Thursday, the day before Easter. Perhaps, it goes with another name of the holiday - Green Thursday (Gründonnerstag). Sweet lovers should taste Bethmännchen - biscuits with marzipan. The authorship of the recipe is credited to the French candy-maker Jean-Jacques Goten, who served in the house of a well-known Frankfurt banker and philanthropist Simon Moritz von Bethmann in the first half of the XIX century. Three almond slivers, decorating each biscuit outside, are believed to represent the three sons of von Bethmann.

In the XX century, after World War II, Frankfurt managed to gradually reassert itself as one of the largest business centers of Europe and the world. Millions of people come here every year to attend trade fairs. The most famous of them is the Frankfurt Book Fair (Frankfurter Buchmesse). It was first held in 1485, in just a few decades after Johannes Gutenberg invented a method of printing books using movable types. Among other famous exhibitions worth mentioning are the largest Frankfurt Motor Show (Internationale Automobil-Ausstellung - IAA), Automechanika – a specialized trade fair for the automobile aftermarket, the Ambiente Frankfurt – the world’s largest Consumer Goods Fair.

Any way, for those arriving in Frankfurt to just relax and get new experiences, there is something to do. For example, the Museum of Communications will take you back in the days when the mankind was unaware of mobile communication. The German Film Museum allows everyone to try hand in cinematography. Besides, the unique geographical location - in the heart of Germany and the European Union - make the city a great launching pad for longer tourist trips.

Cafes, bars and restaurants in Frankfurt am Main 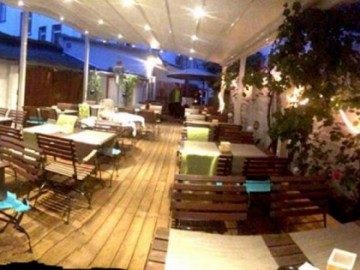 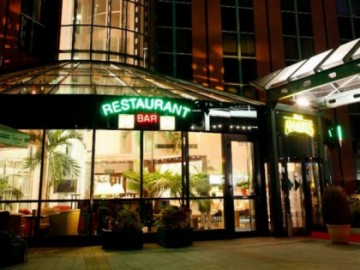 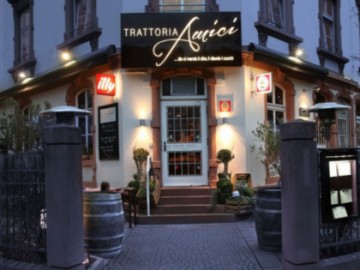 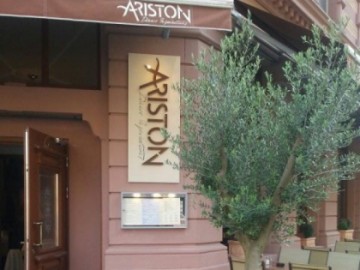 Landmarks in the city Frankfurt am Main 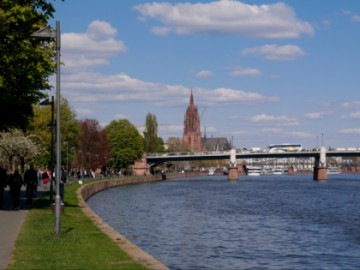 Frankfurt am Main
Museumsufer
Museums and Exhibitions • Other places

Museumsufer – Museums for Any Taste 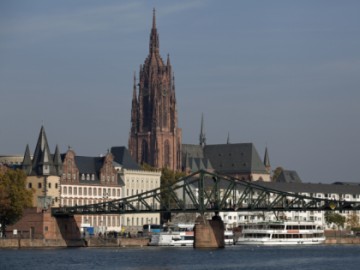 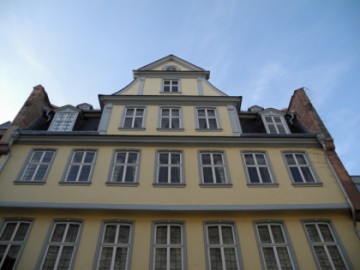 Frankfurt am Main
Goethe House and Museum
Museums and Exhibitions

Goethe House and Museum: Witnesses of the Genius’s Youth 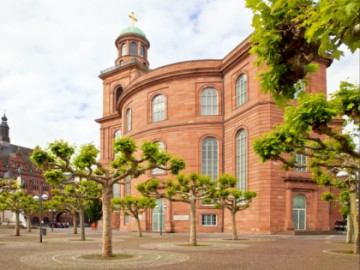 Paulskirche – the Cradle of German Democracy 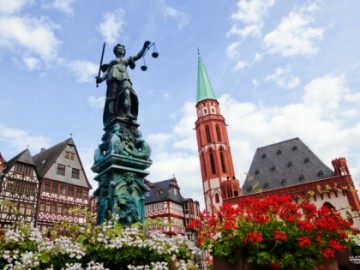 Frankfurt am Main
Römerberg
Other places 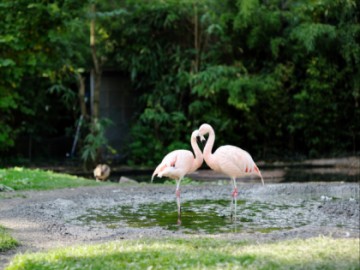 Frankfurt Zoo, where there are lots of wild monkeys 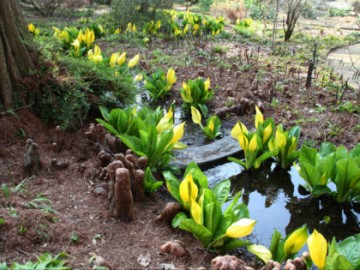