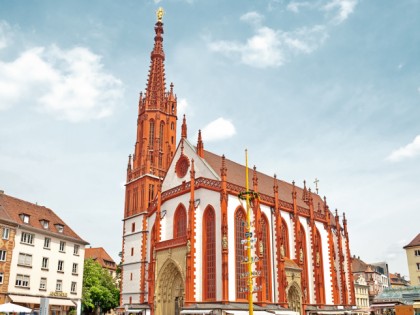 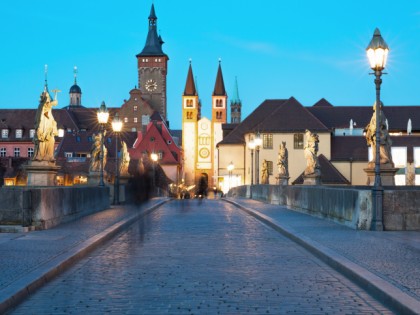 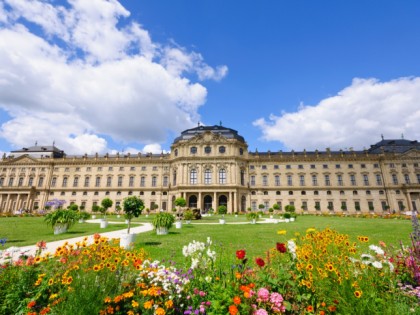 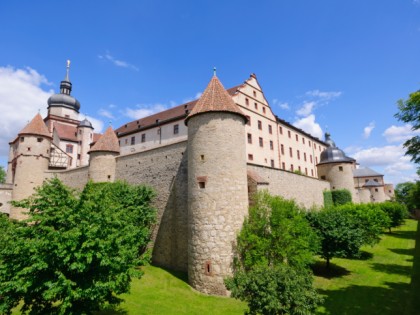 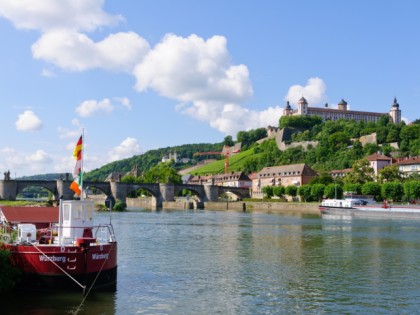 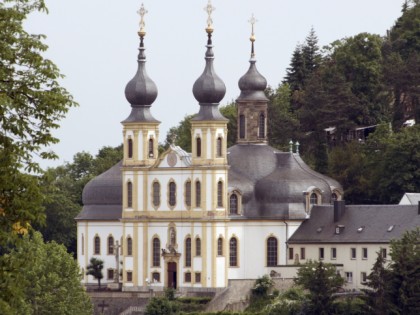 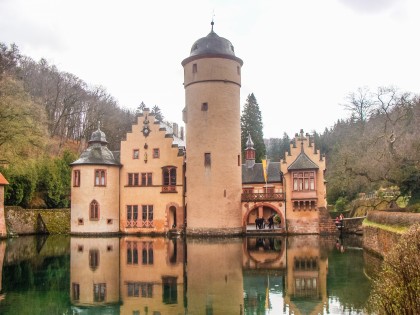 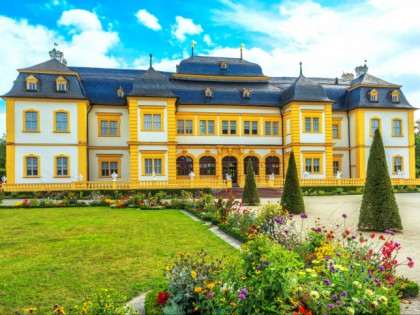 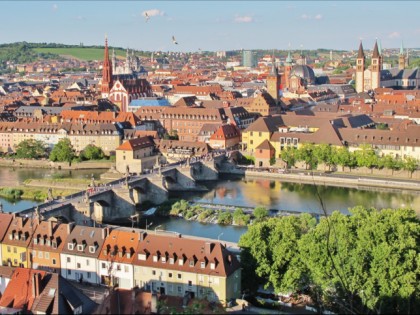 Würzburg, the Wine Capital of Bayern

Ancient Würzburg is famous for its history, architecture and wine. The residence of the bishop in Würzburg is known in the whole world – a majestic Baroque palace that is in no way inferior to Versailles in its luxury. No less famous are the cellars of the residence full of Franconian wine, the capital of which Würzburg is considered to be. This town was loved by Napoleon and Mozart, and nowadays there is no end to tourists in Würzburg who come here for picturesque views and good mood.

Würzburg is one of the oldest towns in Bavaria. It was mentioned for the first time in the chronicles of 704. An episcopacy was established here, while the first Bishop of Würzburg was an Irish named Kilian, who was later canonized. In the early Middle Ages Würzburg became one of the most well-known towns in Central Europe. It is here that the first ever knight tournament on the territory of modern Germany was conducted.

In the beginning of the 17th century the town became the Bavarian center of witch hunt. Historians assert that only in the period from 1626 to 1630 about a thousand women were burnt in Würzburg. In the middle of the 18th century the bishop’s residence was built in the town. This palace is so luxurious that the historians put it in the same range with the French Versailles and Schönbrunn in Vienna. There are large wine cellars located under the residence, where sightseeing can be combined with sampling. The residence is included in the list of UNESCO world heritage. At the end of the 19th century the town came into the limelight thanks to the great physicist Wilhelm Conrad Röntgen. It was in the Würzburg university that he conducted his works. You can learn about this period of the scientist’s life in his house museum. Würzburg had the tendency to attract celebrities. Napoleon Bonaparte loved staying here. The town was visited by Mozart, in whose honour Festival of Classical Music is conducted here today. At the end of the World War II Würzburg was practically erased from the surface by British aviation bombings. 89% of buildings in the town were demolished. Later an idea of not reconstructing the town was discussed, but the citizens opposed it. As a result, many “old” palaces, churches, Fachwerk houses that travelers see today are a thorough reconstruction of the old appearance of the same buildings.

Würzburg is famous for Franconian wine. Viticulture had been practiced in the valleys of Franconia since long. In the middle ages even beer brewing was limited in the town in order not to repress winemaking. In those times wine was sometimes prescribed to patients as medicine. It is often considered that one of the plague epidemics at the end of the 17th century spared the town only because Würzburg burgers consumed wine regularly! Now red Würzburg wines are a well-recognized brand in any part of Germany. It is customary to bottle Fraconian wine in flat bottles resembling flasks. This tradition was born in 1718. It was already then that local wine was actively exported. Original package helped recognize the product. In Germany these bottles are called “Bocksbeutel” which means “goat’s scrotum”. It is considered that the shape of bottles resembles this animal organ. However “Steinwein”, as Franconian wine is also called, is sold in traditional bottles as well.

In summer a wine festival Weindorf is conducted in the town. Numerous tents are erected on the central town square where products of Franconian winemakers can be sampled. Here you are also offered dishes of national cuisine: popular Bratwurst, Schweinshaxe and Schweinsbraten, Brezel and Kartoffelklöße, or simply Klöße.

Places worth seeing in the old town are the town hall, market place and churches – St. Kilian, St. Burkhard and Neumünster. A pleasant walk awaits those who walk along the Old Bridge over Main and ascend the Marienberg mountain. A medieval fortress is located here, with a wonderful view on the ancient town opening from its walls. It is in this place that words of a writer about Würzburg come to mind: “The town is spread out in the valley as if in the middle of a giant amphitheater. Mountains it is surrounded by resemble boxes, while the Lord himself watches this wonder from above”.

Cafes, bars and restaurants in Würzburg 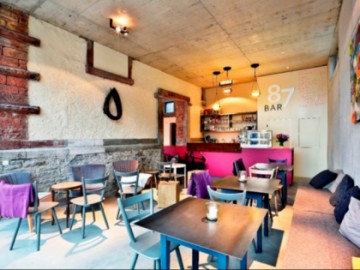 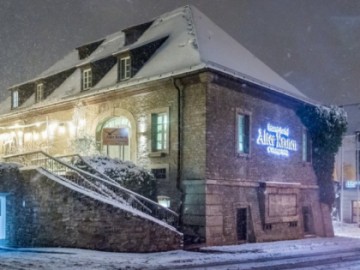 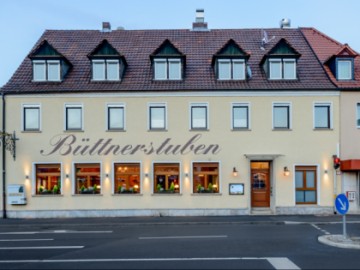 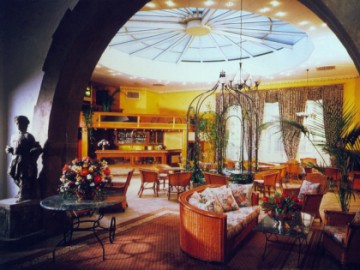 Landmarks in the city Würzburg 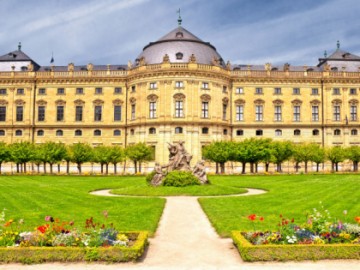 Würzburger Residenz, the German answer to Versailles and Schönbrunn 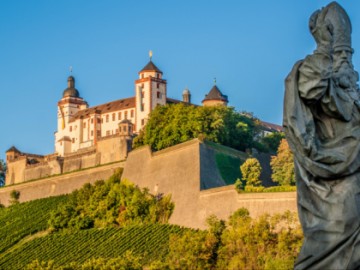 Marienberg Citadel on the mountain top 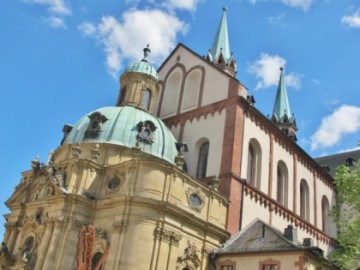 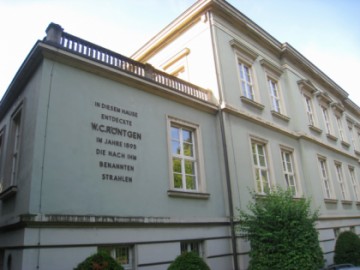 Röntgen’s Laboratory, the cradle of a new radiation 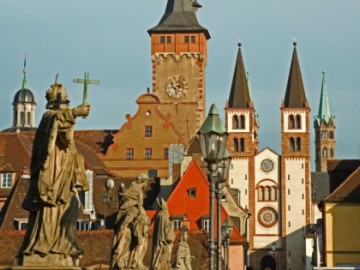