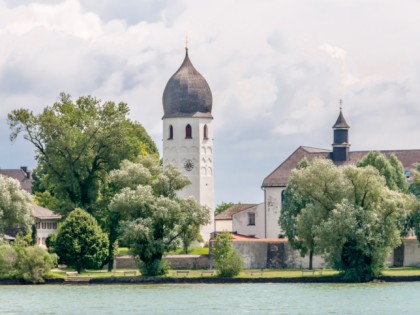 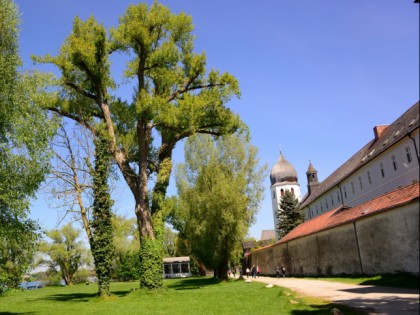 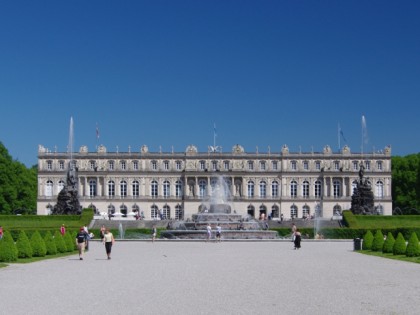 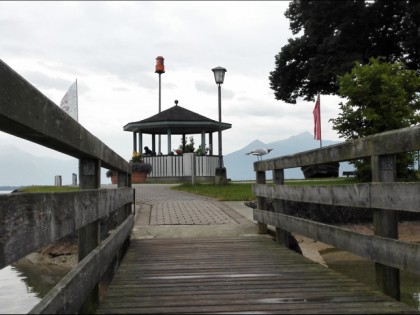 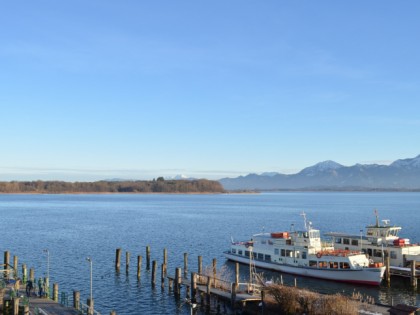 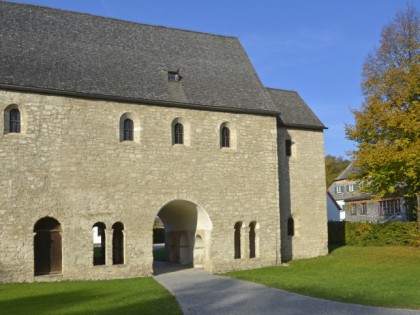 The outlines of the Alps, clear water of the Lake of Chiemsee, Bavarian peasant houses with painted facades and carved roofs - this idyllic picture opens from a promenade of a beautiful town of Prien am Chiemsee. A pleasure craft heads for the island, where the "Bavarian Versailles" is located - a luxurious residence of the King Ludwig II. By the way, you can buy an exclusive on the nearby island – a liqueur and marzipan, prepared by the local nuns.

Prien am Chiemsee is located halfway between the capital of Bavaria, Munich and the Austrian Salzburg, on the shores of a scenic Lake Chiemsee. It is surrounded by no less picturesque Alpine foothills. It is strikingly beautiful here at any time of the year due to this combination. Prien am Chiemsee is part of the historic district Chiemgau. Salt and wood had been obtained and iron had been forged in these places since ancient times. Local breeds of horses including draught-horses were also widely known. Today it is a resort, since the mountain air and the beautiful nature, combined with an easy pace of life, create real miracles.

A small Alpine town has kept its medieval architecture untouched. The Church of the Assumption of the Virgin Mary in Prien am Chiemsee (Der Galerie im Alten Rathaus) is one of its attractions. It was built by masters from Munich and Salzburg and is notable for a magnificent baroque interior, and its thin spire is visible from almost anywhere in the city. The church is located on the Market Square (Marktplatz). This is the heart of the city. The buildings here, like throughout Prien are low-rise, with painted facades. Former peasant houses with carved wooden roofs and shutters (Bauernhaus) stand out most of all. They are part of the Bavarian heritage. The Heritage Museum (Heimatmuseum) is spaced just in one of these buildings.

A lot of cafes are focused in the Market Square where you can drink a strong coffee with apple strudel (Apfelstrudel) and Sacher cake (Zachertorte). Generally, here you can find a huge selection of dessert and various pastry, from meat (Fleischstrudel) to dessert strudel and hand-made chocolates. It is not only in the town center where you can taste a traditional Bavarian snack - Brotzeit with sausage and peasant bread. The local restaurants and bars offer a wide range of sausages, including the Munich white (Weißwurst).  Other meat dishes, including the Austrian schnitzel with fried potatoes are also served here, since Austria is around the corner. As for drinks, you should choose a fresh Bavarian beer, called a March beer (Märzenbier). It is a traditional local sort that people drink not only in March. Keep in mind that the purest lake Chiemsee breeds a fish, which is supplied to cafes and restaurants by local fishermen. So, you should taste a fish dish as well. But first, you better continue to travel around the town.

The historic building of the Old City Hall (Der Galerie im Alten Rathaus) houses an art gallery. It contains the works by local celebrities. Another must-visit place in Prien is a quay-promenade at the Lake Chiemsee (Chiemseepromenade). Here you can visit the harbor with historic ships (Chiemseeschifffahrt), many of which are still running. This is actually an open-air museum just as the Chiemsee Railway Museum (Chiemseebahn-Museum). It is located at the railway station of Prien. The museum exhibits rare models of locomotives of the past centuries. A centenary "Fiery Elias" will take you to the quay berth by the "museum" railway.

Even if you have only two days in the town, one day is definitely worth dedicating to walks down the lake Chiemsee, which is often called the second largest "Bavarian sea" in Europe. First of all,  you should head for Herreninsel island. The Palace of Herrenchiemsee of a dreamer-King Ludwig II was built here in imitation of Versailles: enfilades of richly decorated rooms in the romantic-classicistic style, Ludwig’s work-room (Arbeitzimmer) in Rococo, gardens and fountains, parks and gazebos. It will take at least three hours to view all this gorgeousness, being scrupulously maintained by servants of the complex. It’s better to arrive here in a good weather to enjoy in full walking in the parks and viewing the buildings in Prien am Chiemsee on the other side. If you have time, visit the nearby Ladies’ Island (Fraueninsel) with a Benedictine nunnery of VIII century and view all its beautiful corners.

Festivals in Prien am Chiemsee is a fascinating phenomenon. A Jazz Festival Swinging Prien is held in summer. At the same time, cyclists take part in the international competition Rund um den Marktplatz. The middle of summer and the height of the swimming season is the time for the Sea Festival (Seefest Prien) on the beach Prienavera. The lake Chiemsee is called by locals a sea, on the shores of which you can have a lovely time. There are special attractions for children like inflatable boats and slides. A pre-Christmas market on  Fraueninsel island (Christkindlmarkt) is a great opportunity to buy the famous monastic liqueur (Klosterlikör) and marzipan. The nuns have been preparing  them for centuries. A pre-Christmas sale is also arranged on the Marktplatz on the weekend. Here you can taste a variety of eats and drinks, from a mulled wine to roasted chestnuts and sweet waffles, as well as look at the goods of craftsmen. Here you can buy anything you like.

There are many activities in Prien for adventure travellers. In summer you can go sailing or try surfing, walking, climbing, while winter is skiing, skating and snowboarding. Everything here has been designed for the convenience of people.

Cafes, bars and restaurants in Prien am Chiemsee 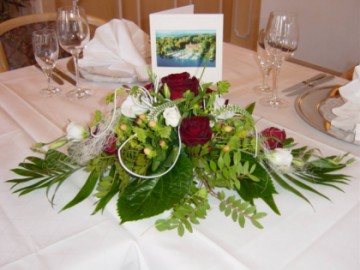 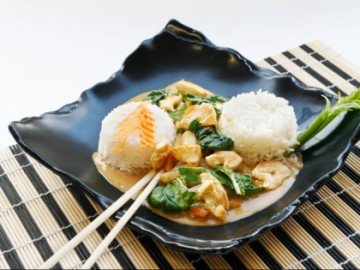 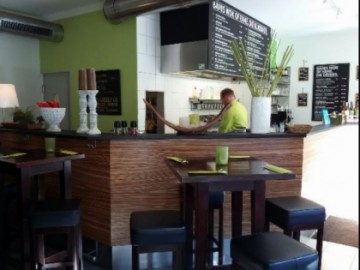 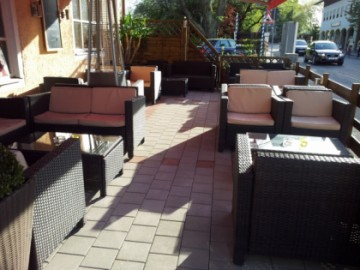 Landmarks in the city Prien am Chiemsee 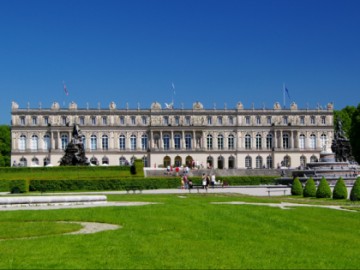 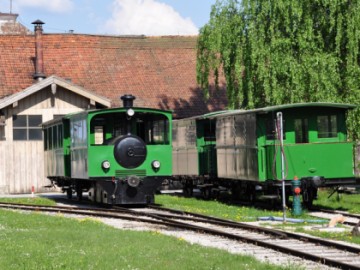 Railway Museum and Station in Chiemsee 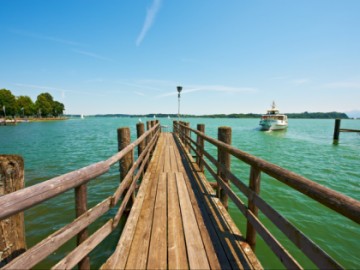 Prien am Chiemsee
Historical Harbor of Chiemsee
Other places

Historical Harbor of Chiemsee: a Quay Berth for the Lake Flotilla 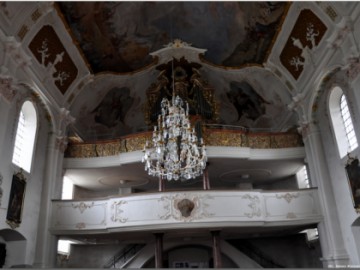