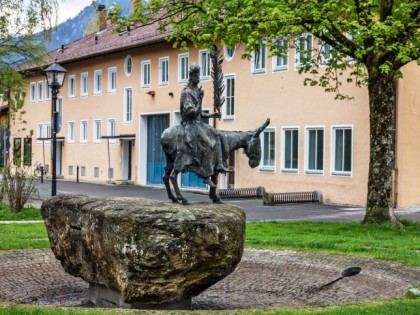 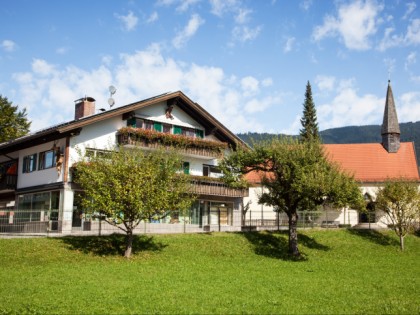 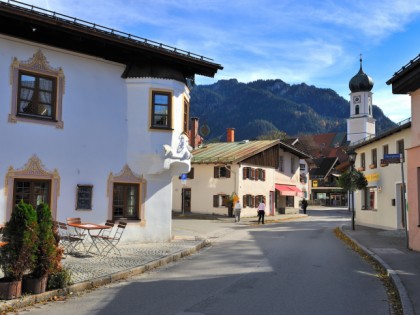 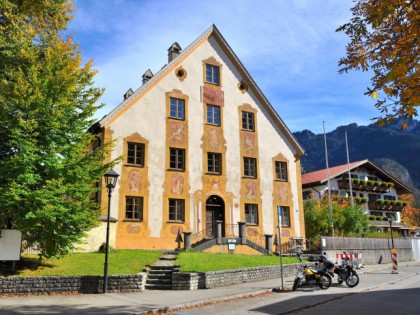 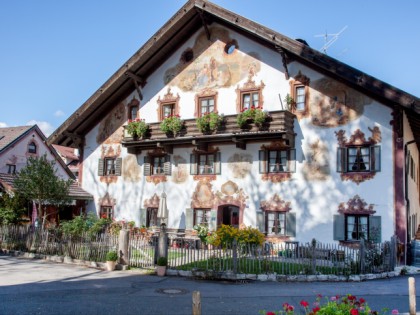 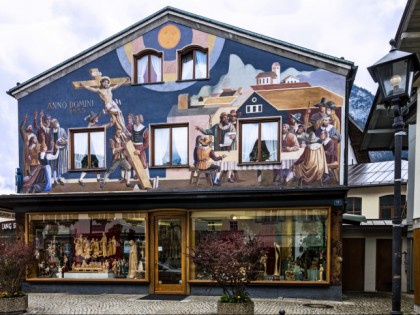 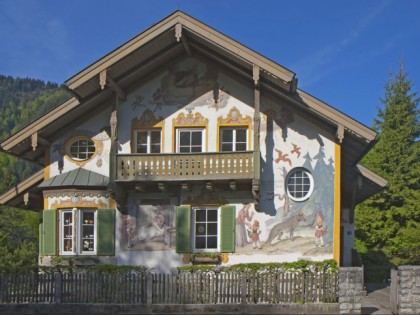 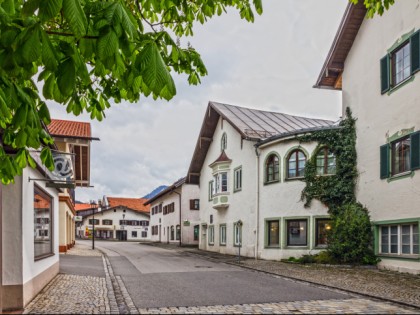 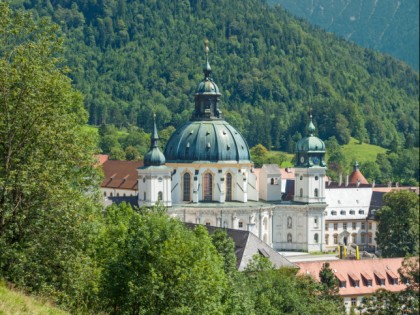 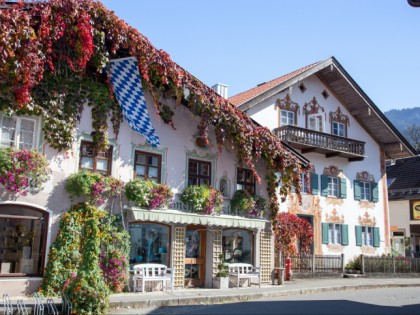 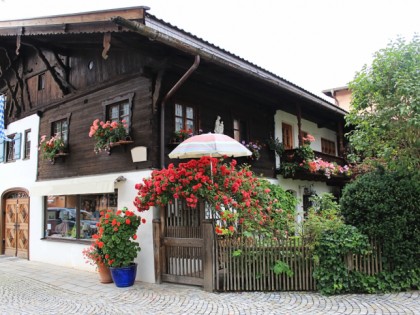 If you take a walk along the central street of Oberammergau, you’ll quickly understand that this spa is UNESCO protected. A small village surrounded by alpine meadows, with decorated houses, its own theatre festival seems like a set to a fairy tale film. It is very easy to find yourself in a fairy tale: it is closer than a two-hours ride from Munich…

History of Oberammergau counts more than three thousand years! There is a version that the name of the village located in the valley of the Ammer river has Celtic roots and comes from the word Ambrigo. In the 11th century a tribe of welves founded Rottenbuch monastery in 20 km from here, to which the parish of Oberammergau was joined. For local peasants it meant that they became an income source for the monastery and had to serve it. But in the 14th century everything changed. King Ludwig of Bavaria took a vow to build the most beautiful monastery in the entire empire, and chose the place in 5 km from Oberammergau. Local peasants were hired to build the Ettal Cloister. At the same time they were allowed to trade. Thus began the beautiful life of Oberammergau. Local craftsmen got actively engaged in wood carving. Fretted crucifixes, figures of saints and other attributes they made were in demand with pilgrims who would come to Ettal to worship the miracle-working statue of Virgin Mary. The monarch liked the figures too. Not only he generously paid for the labour of Oberammergau people participating in the construction of the cloister, but also removed the burden of Rottenbuch monastery. Wood carving became the specialty craft of the village. You can see fantastic works of local craftsmen not only in souvenir shops but also in Oberammergau Museum.

In the 17th century plague reached these places. For an entire year Oberammergau held the line: villagers blocked the Ammer valley from both sides and did not let anyone into the village. When plague finally got into the village and took away one third of its residents, the surviving decided to make a religious procession and address heaven in an unusual way, i.e. stage the Passion of Christ. After first such performance in 1634 plague drastically declined. That’s why villagers vowed to repeat the performance every 10 years. It is known that king Ludwig II of Bavaria –who built the beautiful castle of Neuschwanstein – was present at one of the performances. The king liked the performance so much that he sacrificed a marble crucifix to the village which still stands on the hill. In 1930 a theatre building called Passionspielhaus finally appeared in Oberammergau. Like 400 years ago, modern performances of “The Passion of Christ” engage not professional actors and singers, but local people born or having lived here at least 20 years. But they still use texts and music created in the time of the first performances! “The Passion of Christ” is now performed every 10 years. The last performance took place in 2010.

Besides wood carving and theatre festival, Oberammergau is famous for a special way of painting house façades – Lüftlmalerei, or in English “air painting”. The first painting in this technique was made in the 18th century by the local artist, author of sets to another performance of “The Passion of Christ” Franz Zwink. You can see his work, for example, on the Pilatus house façade. Such paintings are often based on Bible. But you can also find fairy tale stories and simple ornaments around windows and doors. Probably only pompous colourful frescos from the main attraction of Oberammergau – church of St. Peter & Paul – can compete with the beauty of these paintings.

Oberammergau cuisine, as anywhere in Bavaria, is simple and nutritious. Most popular here are Schweinshaxe, sausage salad Wurstsalat, “sour lung” – a delicacy from a calf’s insides, fish baked on a skewer, prune pie. And of course, sausages of several kinds: Wollwurst – without jacket, white Münchner Weißwurst, and garlic sausages Bierwurst.

Oberammergau is so small you can walk around it in a couple of hours. But it is such a beautiful and unusual place that it is worth staying here for the whole day. Watch unusual wall frescos without haste, choose a wooden figurine that keeps the warmth of the craftsman’s hands. And after you’ve eaten sausages, stay another hour in the coffee shop watching life around you with a cup of coffee.

Cafes, bars and restaurants in Oberammergau 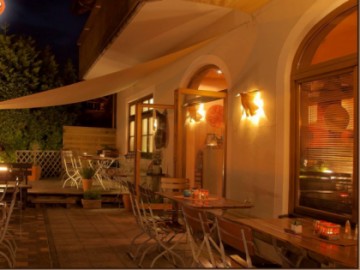 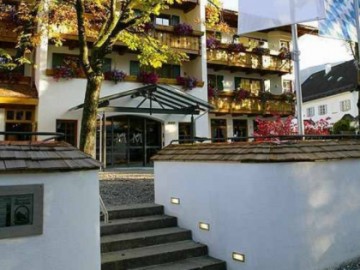 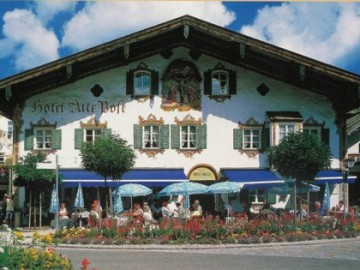 Landmarks in the city Oberammergau 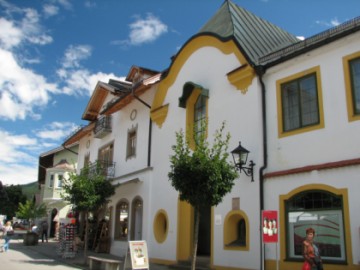 Oberammergau museum with a collection of fantastic wooden items 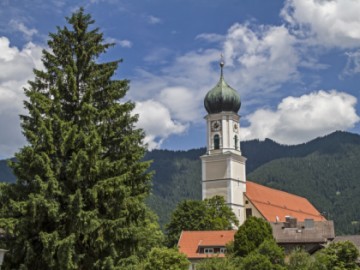 Church of St. Peter and Paul in Oberammergau 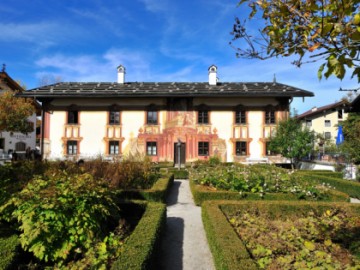 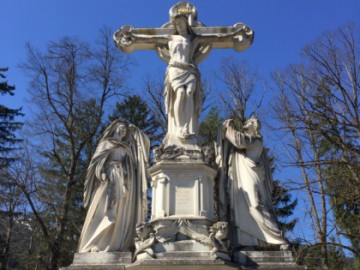 Crucifix on the hill – a gift from the king