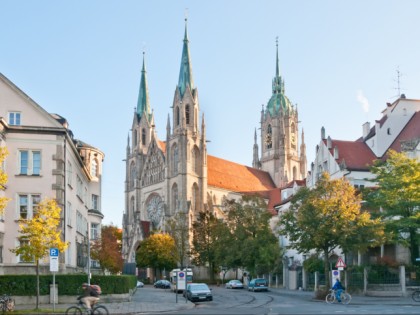 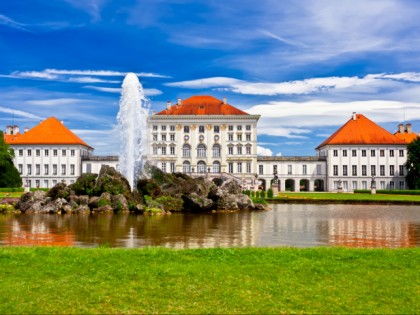 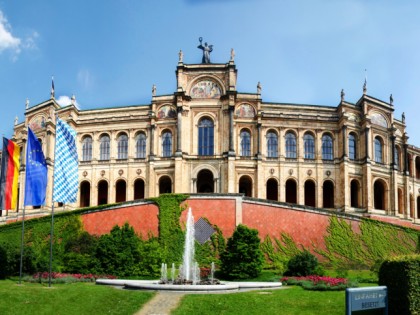 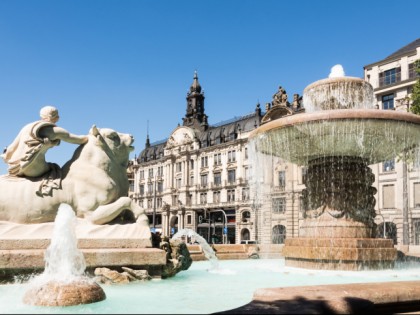 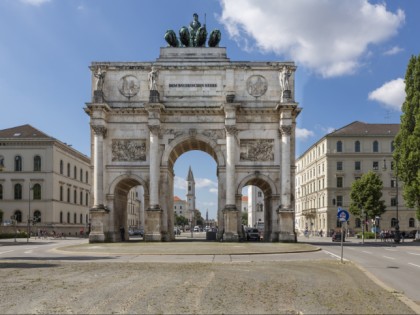 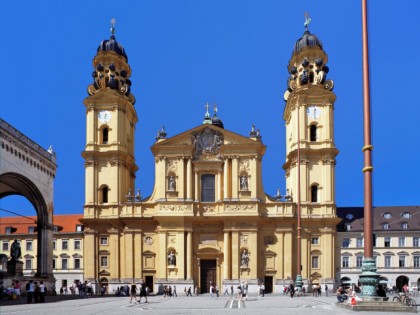 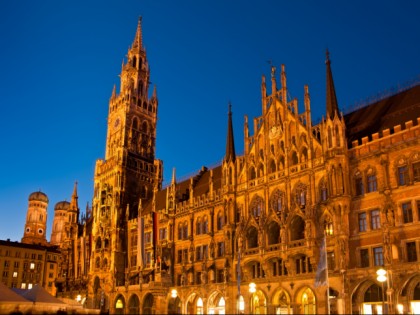 Munich – Heart of Bavaria and Athens on the Isar

Munich is one of the most popular tourist cities in Germany. It is called the heart of Bavaria and Germany’s IT-capital. The country’s most expensive real estate and one of Europe's best cycling systems with a length of 1,200 km of bicycle paths are in Munich! Bavarian dialect is spoken here and each year the city hosts the world's largest folk festival - Oktoberfest. And the good nature and openness of inhabitants reveals the motto of the city, which nobody else in the world can boast themselves: "Munich loves you!" And the tourists feel it ...

Munich has a history of eight centuries. The first mention of the place with this name dates to 1158. It was granted a city status almost 20 years later - in 1175. But all began much earlier, in the VIII century, when monks from Schäftlarn Monastery decided to settle on the banks of the Isar River. It is believed that the name comes from the word Monh, ie monk. According to another version Old High German word Munichen – “at the monks" is behind the name. For centuries the seat of the Wittelsbach Dynasty was there. They came to power in 1240 and ruled over five centuries - until 1918.

Ludwig I was the brightest representative of the Bavarian monarchs. It was thanks to him that Munich largely has become the place that is so admired today by everyone who comes here. His goal was to turn Munich into Athens on the Isar. The king himself spoke about it this way: "I want to create the city of Munich, which would raise Germany's honor, so that no one could argue he knows Germany before he sees Munich." The monarch made Munich a city of the arts. He did not just collect paintings, but attracted the best artists of his time to create paintings, contributed to opening of museums, ordered the architects to construct buildings in the Greek and Italian styles. So the Triumphal Arch (Siegestor) and the Generals’ Hall (Feldherrenhalle) were built in the city. The old and new Pinakothek and the Glyptothek appeared here. It is interesting that in the second half of the XIX century, Munich was the second European cultural center after Paris! Many facts contributed to this title:  the Russian Tsar Nicholas I came here in the search for the groom for his daughter. King Ludwig I thought up to assemble a collection of portraits of the Bavarian beauties that everyone can now see in Nuremberg (Schloss Nymphenburg) – the huge summer residence of the XVII century Wittelsbach dynasty, which has survived to the present day without any significant changes. The extraordinary Asamkirche - the brightest example of the Rococo style- also appeared in Munich. Azam brothers built it in 1746. The narrow and high church resembles a magic box. Today, visitors can only marvel at how the brothers managed to create a temple of such incredible beauty and volume in such a tiny piece of land. The New City Hall (Neues Rathaus) building on Marienplatz can compete with Hôtel de Ville in Paris. Built in neo-Gothic style in 1867-1909, Munich’s City Hall attracts tourists with an observation deck on an 85-meter tower and the magical clock. Every day at 11:00 am, 32 figures on the clock represent scenes from medieval life, which are accompanied by melodious chimes. Another point of attraction is the Frauenkirche with one of the best viewing points of the city. It is believed to be the tallest building in the center of Munich, and for some time it was forbidden to build houses taller than this church within the old city. The Devil’s Footstep attracts everyone inside. According to legend, he got angry at something and stepped right in the temple.

Local dishes and beer naturally complement all of these cultural and historical parts of Munich. Die Münchner Weißwurst -a white short thick sausage of veal, bacon and parsley was first prepared in Munich in 1857. Since then, Munich sausages are eaten with sweet Bavarian mustard and pretzel (Brezel), and wash down all that beer. Another traditional dish is the Schweinehaxe pork leg with sauerkraut. Generally people love meat dishes in Bavaria. At the beginning of the XX century a traveler noticed that nowhere else beef is consumed in such large amounts as in Munich. Aspic (Sülze or Sulz) and meat loaf (Leberkäse) are common cold dishes in Munich. The tradition of cooking Leberkäse is 200 years old! For the first time it was prepared by a butcher, whom Elector Karl Theodor brought to Bavaria. Minced pork and beef was first baked as a loaf in a bread pan. Hence the name of the dish. Connoisseurs of German can assume that liver (in German Leber means liver) is an ingredient in the mince, but it is not. The name comes from the old German world "lab" meaning a loaf and "kasi" meaning thick, dense mass. Another snack for the beer is Obatzda (Obatzter or Obazda) - grated cheese with cream cheese, butter, onion, cumin and paprika. Pfannkuchensuppe - broth with pancakes which are cut into strips –is one of the unusual soups. Leberknödelsuppe with knodel is more usual. Knodel (Klöße or Knödel) is the most common Bavarian dish. People add any ingredients of their own preference to flour and potato to make these meat balls. Bavarians usually round out the meal with a cup of coffee, choosing apple strudel (Apfelstrudel) with vanilla sauce for it. People from 187 countries of the world live in Munich, so it is not surprising that a wide choice of dishes of different countries’ cuisines is offered in the city restaurants.

The launch of world-famous Munich Oktoberfest is linked with the name of Ludwig I. For the first time it was held on October 12, 1810 - the day of the wedding of Ludwig and Princess Therese of Saxony- Hildburghausen. The meadow on which the festival developed was named Theresienwiese to honor her. Six Munich breweries- Augustiner, Spaten-Franziskaner, Paulaner, Hacker-Pschorr, Löwenbräu, Hofbräu – are the official suppliers of beer for Oktoberfest. Munich is undoubtedly the number one beer metropolis in the world. One cannot really count beerhouses in Munich, but one of them is particularly famous. Hofbräuhaus or the Court Brewery was founded in 1589. Prior to the beginning of the XVII century, brewery products were available only to the court and the honorable gentlemen. Only in 1828, "the fairy-tale king" Ludwig II of Bavaria, ordered to open the doors of beerhouses to all. On September 8, 1908 was marked with a sensation in Hofbräuhaus! A visitor of the restaurant ordered lemonade...

The manager was forced to serve the customer himself, as waiters flatly refused to do it!

Munich captivates and impresses with its beauty and scale. The large, but exceptionally seamless Royal Square (Königsplatz), the wide and bright pedestrian zone -Kaufingerstraße, Marienhof large rectangular square that is a stone's throw from the City Hall, are the favorite places of tourists from around the world. Fans of luxury should walk along Maximilianstrasse. Besides the unique architecture, the most expensive street in Munich offers a great selection of luxury boutiques, art galleries, restaurants and exclusive luxury jewelry stores. However, the scope is felt not only in the streets. For example, many specially come to Munich for the second and even a third time to wander through the German Museum, as it is simply impossible to get acquainted with all the achievements of science and technology there during one visit. You should plan spending more than an hour at BMW Museum, otherwise you'll have to run to examine everything. Visiting the Bavarian capital with children is also very interesting, as the country's oldest circus Krone and Hellabrunn beautiful zoo are in Munich.

Visitors fall in love with the palaces, parks, museum collections, cozy pubs with wooden benches, and the relaxed atmosphere of Oktoberfest once and for all. The best place to have a break from Munich’s span, beer and noisy crowds of tourists is the English Garden. This is one of the largest urban parks in the world. There are a lot of cycle paths, cozy meadows, and walking paths here. After a leisurely stroll in the garden you can plunge into the bustling city center with renewed vigour. Delicate houses in the Baroque and more elegant Jugendstil styles will catch your eyes here. You will admire the zest for life and joyous smile of Munich residents.

Cafes, bars and restaurants in Munich 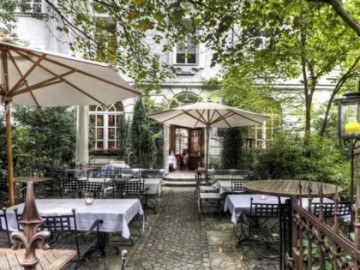 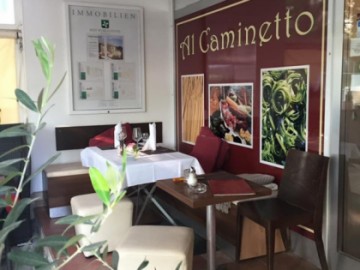 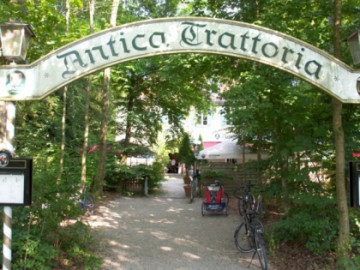 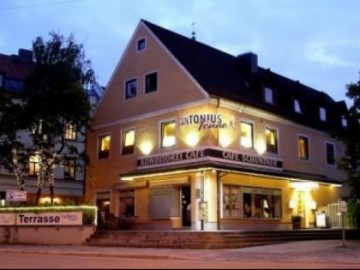 Landmarks in the city Munich 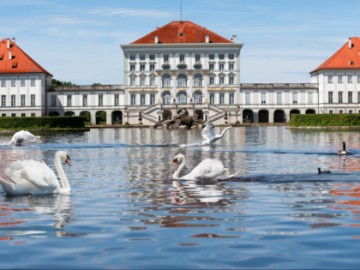 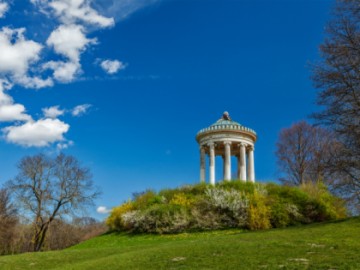 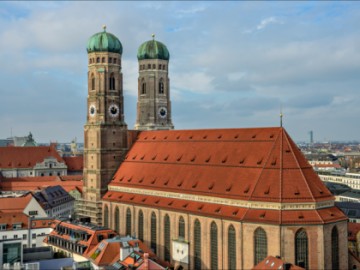 Frauenkirche as a Symbol of the Bavarian capital 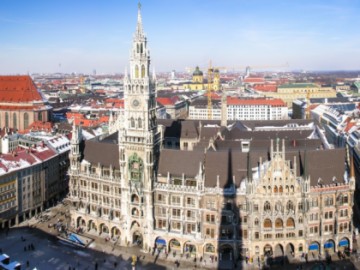 Marienplatz - the Heart of Munich 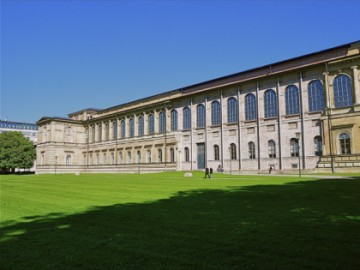 Alte Pinakothek. Nothing except Paintings 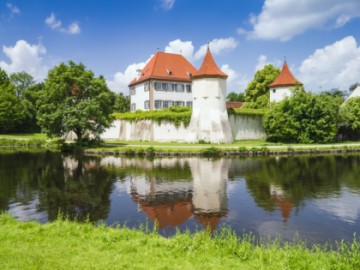 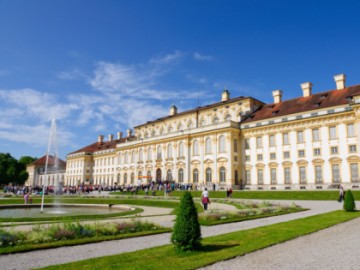 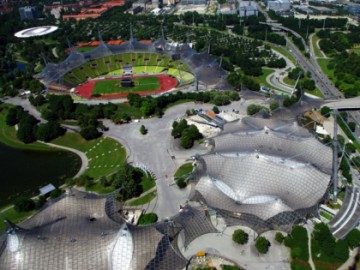 Olympic Park - Sport, a Picnic and a City with a Bird's Eye-View