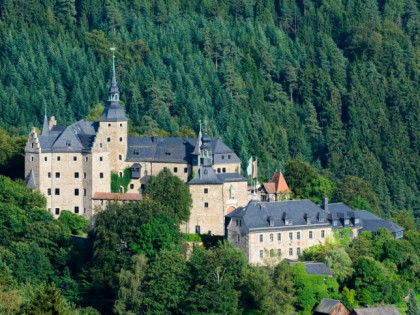 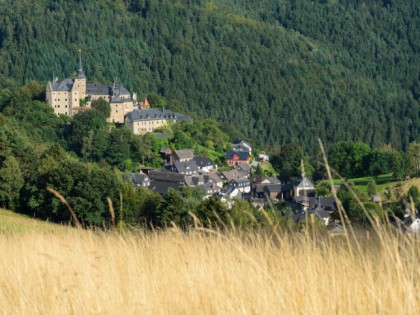 Ludwigsstadt is securely nestled by the Thuringian forest. Nothing disrupts the steady rhythm of life established here over centuries. However, surprises are concealed behind the outward calmness. The giant Thüringer Warte observation tower offers views not only of the scenic mountains of Franconia, but also of the unique shaly complex, the museum-monument of the local mining industry. The modest half-timbered houses in the city are combined with the magnificent Lauenstein Castle (Burg Lauenstein). Speed trains quietly run along the bridge of the XIX century several times a day.

In the annals of Ludwigsstadt there are no outstanding battles, creepy stories and legends about the betrayals, which are so many in the medieval history. Since the XIII century to the present day, it has been a quiet small town with well-established rules and traditions. An express train runs along the elegant Trogenbach Bridge (Trogenbachviadukt) from Berlin to Munich and back several times a day. On Sundays, the residents  attend services in the ancient St. Michael’s Church (Pfarrkirche St. Michael), adorned with paintings of the XV-XVI centuries. Every two years, in summer Lauenstein Castle hosts the colorful Burgfest Festival with musical performances, knight tournaments and degustation of the local beer.

Ludwigsstadt, as a matter of fact, consists of several villages. The old-timers call the town itself the main village. Ebersdorf, Lauenstein, Lauenhain and Steinbach an der Haide are situated around it. The latter was awarded the title "Golden Village” (Golddorf) in local competitions for several years in a row. There are hiking and biking trails between these populated localities. During walks in the warmer months, you can admire the bluish reliefs of the famous Franconian Forest (Frankenwald) in the distance and the tranquil green valleys with whitening houses.

In addition to architectural landmarks and beautiful scenery, the Bavarian cuisine and Franconian wines make tourists happy in Ludwigsstadt. With wine people usually enjoy an onion pie prepared here in the Franconian way (Fränkischer Zwiebelkuchen) with spices and sour cream. The residents value the funny round pasties- snowballs (Schneeballen) very much and the local population sometimes affectionately calls them stork nest. And, of course, people here are fond of pork! In the restaurant menus, you will easily find roast pork shoulder (Schäufele), served with a side dish of stewed turnips, pickled cabbage and other vegetables. Carp baked in fresh beer (Aischgründer Karpfen) is also a favoured dish here.

In Ludwigsstadt the unique oil shale deposits are a story in their own right. Here you can go on a tour of the so-called "shale route" in the Geopark Schieferland industrial complex. Once it was a large industrial center, the glory and pride of Ludwigsstadt and the whole Kronach County (Kronach). Slate, diabase and limestone were extracted here. The five-kilometer route of the Geopark is routed through the most interesting historical and geological places. Walking along it, you can see outcrops and familiarize with the stages of oil shale extraction. You can end the tour visiting the Oil Shale Museum (Schiefermuseum). Among other things, you will learn that very stylish decorative elements and architectural decoration are made from this rock. In order to imagine the scale of oil shale mining and admire the wonderful Bavarian landscape, you must climb the Thüringer Warte Tower- the Tower of Expectations, the monumental building on the Ratzenberg hill. It offers spectacular panoramic views from a height of over 700m.

Ludwigsstadt i sable to surprise with its diversity. Besides shale and walking paths, there is the particularly nice old Chapel of St. Mary (Profanierte Marienkapelle) of the XIV century there. This modest round building with the half-timbered attic "embraces" with old trees. The ancient Lauenstein Castle stands a bit further, on the same-name hill. The sad lady in White, Katharina von Orlamünde, is still haunting in the castle’s corridors...

Cafes, bars and restaurants in Ludwigsstadt 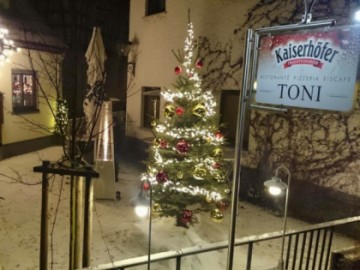 Landmarks in the city Ludwigsstadt 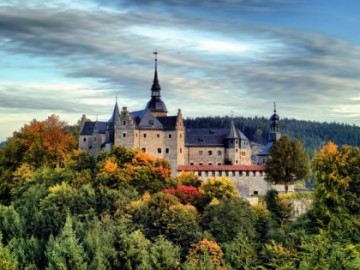 Lauenstein Castle and Dramatic Story of the White Lady 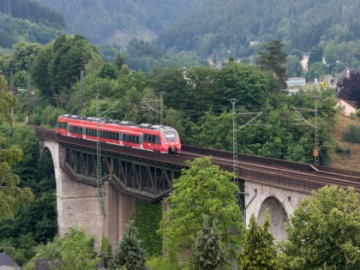 Trogenbach Bridge - Between Past and Future