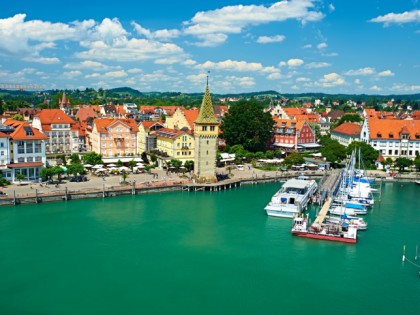 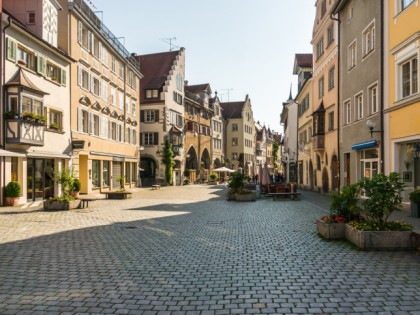 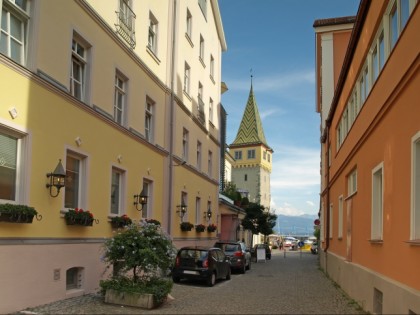 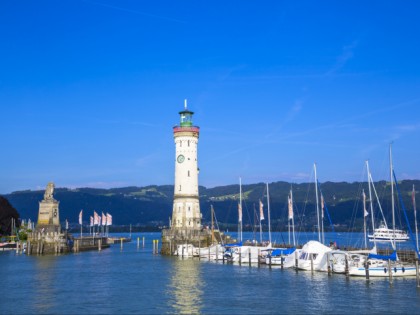 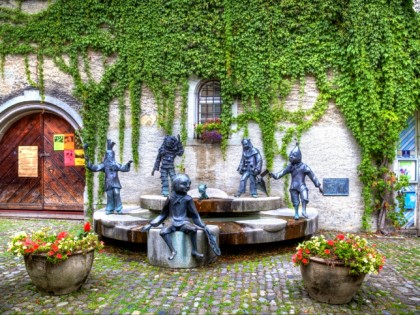 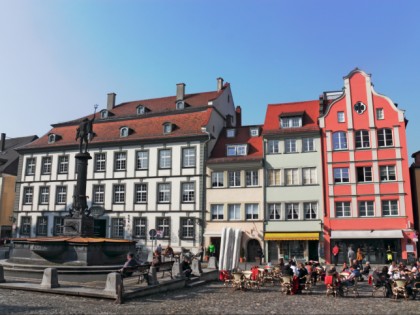 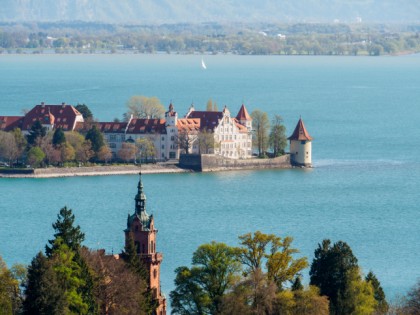 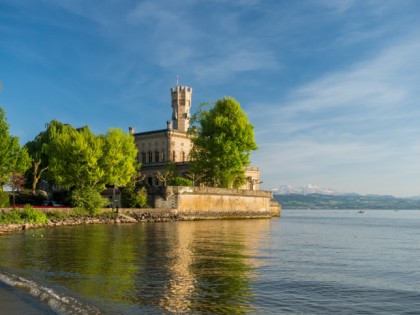 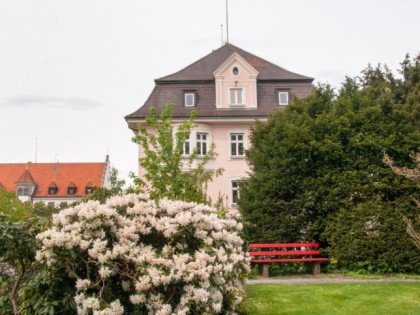 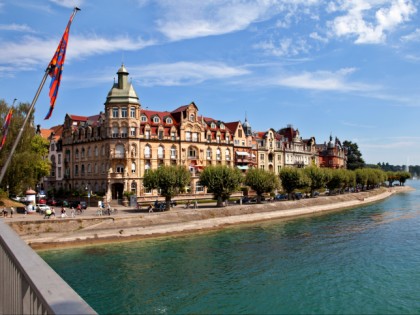 A lake, a mooring berth and romantic views of the Alps foothill - all this is Lindau. Being in this town, be sure to taste the local wine, cheese and other alpine specialties, as well as walk along the beach promenade, look at the only lighthouse in Bavaria and the majestic lion statue guarding the harbor entrance. The second part of the compulsory program is a boat tour.

Lindau has a unique location. It lies on the shore of Bodensee, in a place where the borders of three countries: Germany, Switzerland and Austria converge. The historic part of the town with about three thousand inhabitants is located on an island, which is connected with the mainland by a motorway bridge and a railway dam.

The name Lindau is first mentioned in the chronicle of the monk from the Abbey of Saint Gall. In 882 he made an entry stating that a nunnery had been founded on the island under lime trees (Linde means lime tree in German). Therefore, the settlement around the abbey became known as Lindau. A large market appeared in 950 on the mainland opposite the island, later it moved to the island as well. Trade was very successful, as an ancient Roman road from Italy to Nuremberg was passing through Lindau. A well-established production of fabrics and fishing were of great importance for the development of the town. So, Lindau became an important trade and economic point of the Alpine-Rhine region, being reliably protected against enemy water attacks. Since 1275, it enjoyed the privileges of a free imperial town as a part of the Roman Empire. Such a situation proceeded until 1802, when the status of a free town was lost due to the fall of the Empire.

The coastline in Lindau is amazingly beautiful and memorable. The Bavarian lion sculpture and a lighthouse, being the only one in Bavaria, stand on the harbor entrance. The harbor Lindauer Hafen leaves no one indifferent. In summer, it is packed to capacity with steamers, yachts and holidaymakers. The quay at the harbor is Lindau’s showcase. It is complemented with the views of the majestic Alpine foothills...

You can enjoy local wine in restaurants and cafes by the lakeside. Local wines have a rich taste and aroma due to the mild, almost Mediterranean climate. In hot weather, there is nothing better than the local Schnapps from regional farmers. Since Lindau is surrounded by Alps, it is important not to forget about the local Alpine cheese. Though, cheese from the nearby Allgäu (Käse im Allgäu) is also worth tasting. Since Lindau refers to the historic region of Swabia, you can taste here the Swabian spätzle pasta with sauce (Spätzle mit soße) - a simple but hearty homemade noodles, made from flour, eggs, water and salt. Spätzle is served in various forms, which number about fifty: with spinach and gorgonzola, ham, mushrooms, tomatoes, beef, chicken and so on, with various gravy. And since Austria is located nearby, in Lindau you can find fried chicken in Styrian (Steirisches Backhendl). This is an Austrian dish. Chicken steaks, smeared with lemon juice, salt and pepper are rolled in breadcrumbs and then deep-fried. This way, chicken is covered by a delicious browned crust, making it look like a schnitzel. By the way, here you can also find the classic Wiener schnitzel and the famous Bavarian beer!

The Old Town Hall (Altes Rathaus) with its painted facade, inner staterooms and a covered staircase attracts attention when walking around the Lindau. This is one of the most notable buildings in the town. The Cathedral of Our Lady (Münster Unserer Lieben Frau) on the Market Square with a high clock tower looks very impressive. Mangenturm Tower on the lakeshore attracts attention by its variegated roof. Cultural events are presently organized there. The Church of St. Stephan (St. Stephan am Lindau), situated next to the Cathedral of Our Lady, is the oldest in Lindau. It was founded in about 1180 and was rebuilt several times, however the facade indicates its considerable age. The City Park (Stadtpark) is nearby.

As for the festivals in Lindau, noteworthy is the July Wienzefestival Komm & See with live music on the beach promenade and other open areas. Lindauer Kinderfest is the main event of the year. This is a traditional children's party to mark the end of the Thirty Years’ War, which has been celebrated since 1655 in July. Well-dressed children march with songs along the city to the Old Town Hall, where they receive sweets. The regatta on the Lake Constance, called Rund Um Den Bodensee, can be seen in June. Lindau is also known for summer meetings of students and others with the Nobel laureates in various fields of science. This event is called the Nobel Laureate Meetings at Lindau. It has been held since around the fifties of XX century on the initiative of the Swedish royal family. In autumn you can visit the Herbstfestival Lindau and Oktoberfest Lindau, with beer and wine, concerts and festive atmosphere. And in winter you can enjoy the Lindau Harbour Festival (Hafenfest). It goes with classical music and tasting of Christmas specialties.

When you are no longer capable of wandering around the town and walking along the lakeside, Lindau will offer a boat trip down Bodensee, from where you can see the coasts of Germany, Austria and Switzerland. The boat can sail to Friedrichshafen, Konstanz and an unusual flower island Mainau. The calmness and  tranquility of the local life can be felt even better on the water than in the town...

Cafes, bars and restaurants in Lindau 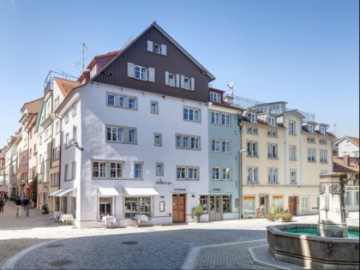 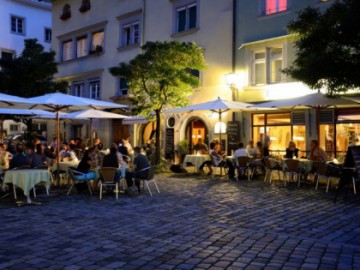 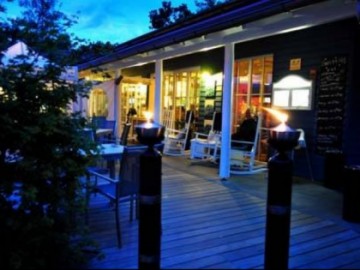 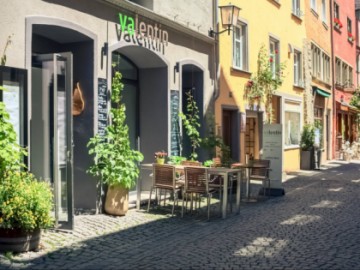 Landmarks in the city Lindau 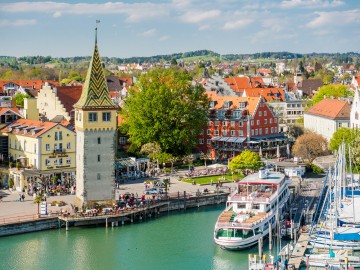