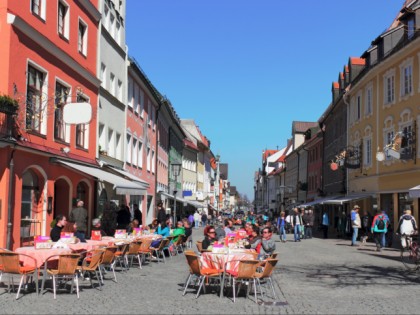 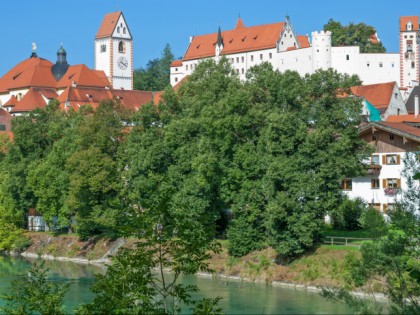 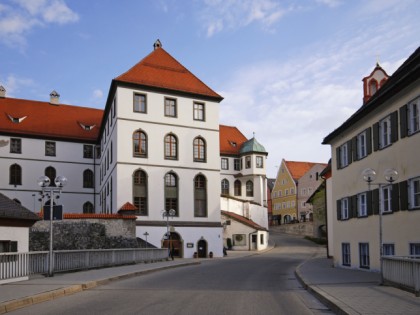 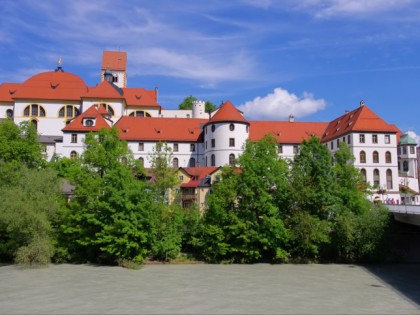 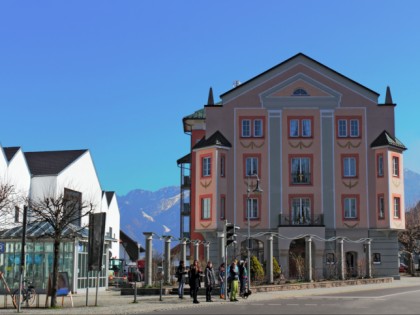 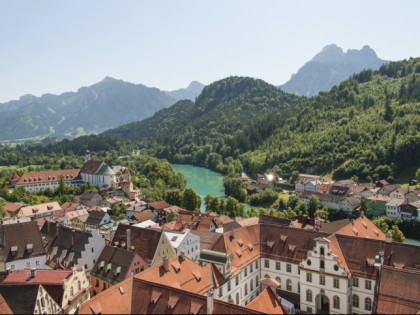 It is no coincidence that Fussen closes the famous route "Romantic Road in Germany". The town is popular for the convenience to start from here the acquaintance with the world-famous Bavarian castles - Neuschwanstein, Hohenschwangau and Linderhof. In addition to the fairytale beauty of the castles, the controversial and tragic figure of the Bavarian king Ludwig II stirs up the interest in them, which are all related to the name of the king...

Fussen is located at the foot of the Allgäu Alps on the banks of the Lech River, five kilometers from the Austrian border. The first settlement appeared in this place in the III century. It was one of the military camps on the Via Claudia Augusta, connecting the north of Italy with the modern Augsburg. In the VIII century Saint Magnus founded the Benedictine monastery (Benediktinerkloster St. Mang). The oldest survived fresco in Bavaria is kept in its basilica! It is located in the eastern vault and dates back to 980. The magnificent baroque decoration in the abbey rooms is startling. The rooms include the Princes’ Hall, the library and refectory, with the domed Colloquium with frescoes. The south wing of the monastery houses the Fussen Museum (Museum der Stadt Füssen), while the north wing houses the city administration and the archive. The museum is interesting with one of Europe's largest collections of lutes and violins of the XVII-XIX centuries. At that time, Fussen was considered the main European manufacturer of stringed instruments.

During Napoleon’s reign, Fussen joined the Bavarian kingdom. The main attractions of the area are connected with the name of the Bavarian king Ludwig II, who is often called the Fairy Tale King (Märchenkönig). Hohenschwangau Castle was built during the reign of Ludwig’s father, Maximilian II. Ludwig spent most of his childhood there. At the age of 18, he had to take the throne after his father’s sudden death, although music, literature and art interested him much more than politics. After Bavaria lost independence in 1870, Ludwig II focused on his favorite designs, spending all the inheritance on building castles! During the king's lifetime, only Linderhof Castle was completely built. Ludwig was inspired by the Palace of Versailles while creating it. The decoration in rococo style inside Linderhof is striking.

As for his most famous design –Neuschwanstein Castle - Ludwig saw it only in scaffolding, and lived in it for a very short time. The castle has more than 200 rooms but only 15 of them are fully finished and furnished. In 1886, the Cabinet of Ministers, which the king intended to dissolve, declared Ludwig II incompetent. Soon the king died under mysterious circumstances. His body was found in shallow waters in Lake Starnberg. During his life, the King was accused of extravagance and eccentricity. Ironically, when the castles where the King was looking for solitude, in 1923 became the property of Bavaria and opened to tourists, they quickly paid off and began to bring profits to the treasury.

In addition to the castles in Fussen you should also get acquainted with the traditional cuisine of the Allgäu region. It consists of simple and hearty meals of farmers. For hundreds of years, eggs, flour and milk were the basis of the locals’ ration. That is why the most popular dishes here are different kinds of pasta as Schupfnudeln -potato noodles- for example. It is simple to prepare: you need to boil the potatoes, mash, add egg, nutmeg and some other spices to it, then roll and make thick noodles shaped like fingers. Schupfnudeln is boiled or fried and served with sauerkraut or applesauce. Egg noodles (Spätzle) are very popular. They are made from simple dough that is scraped off with a wooden float and immediately boiled in salted water. In Allgäu region spätzles are served for dinner in summer with fresh cherries, sprinkled with sugar, cinnamon and nutmeg, and in autumn - with grated apples. Another traditional dish is Kässpatzen -pasta with grated cheese, sprinkled with fried onions.

Succulent roast beef (Bratengerichte) can also be found in restaurants. A dish that came to Bavaria from Austria is often served for breakfast there. Kaiserschmarren - the so-called Imperial pancakes -are divided into pieces with a fork while roasting, and are fried until becoming golden brown and served with apple or plum sauce. There are very many recipes for Kaiserschmarren: nuts, cherries, plums, apples, raisins and caramelized almonds can be added to the dough.

Fussen is a city that loves music. On the first weekend of August, jazz stars come here and on the city’s day in mid-August, Fussen turns into a music area in the open air. In September, in the Singers’ Hall of Neuschwanstein Castle concerts are organized dedicated to Wagner’s operas. December in the city is marked with Christmas fairs held in the yard of St. Mang Monastery. It ends with the New Year celebration. In Fussen it is celebrated in an unusual way: at 4pm on December 31, people gather on the Theresienbrücke Bridge and 50 hardy souls jump into the icy water and drift with the current to the bridge. As a sign of welcoming the first swimmers, crackers and fireworks go off on the bridge and after the swimming ends, a firework display takes place. The celebration continues on Kaiser-Maximilian-Platz square, where concerts are organized.

The romantic castles, traditional local food and fun holidays of Fussen await guests all year round. A nice addition to this will be a visit to a late Gothic High Castle (Hohes Schloss), where 500-year-old painted walls of the courtyard boggle the imagination. The paintings easily make believe that the painted bay windows and windows are real. And in summer a two-hour boating on Forggensee Lake will become a beautiful way of relaxation. The lake is considered one of the most beautiful in Bavaria!

Cafes, bars and restaurants in Fussen 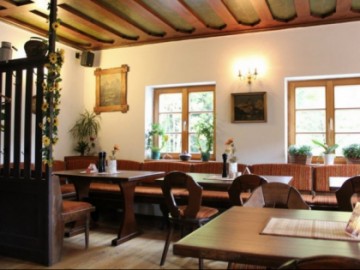 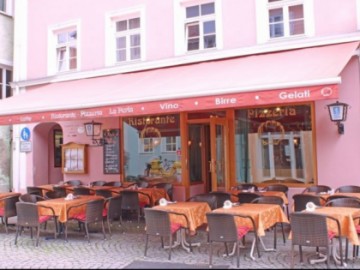 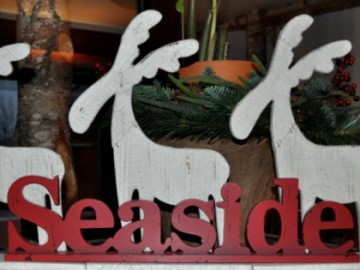 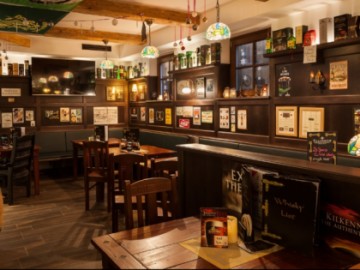 Landmarks in the city Fussen 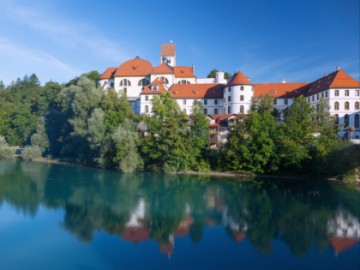 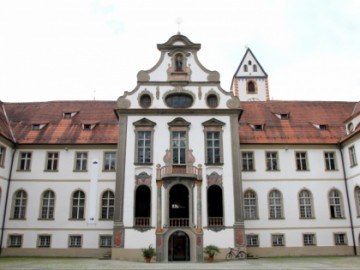 The Fussen Museum: the City’s History in a Monastery 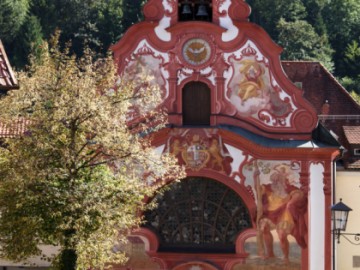