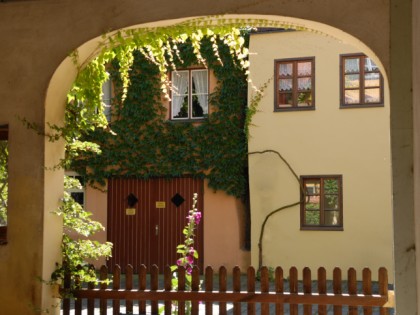 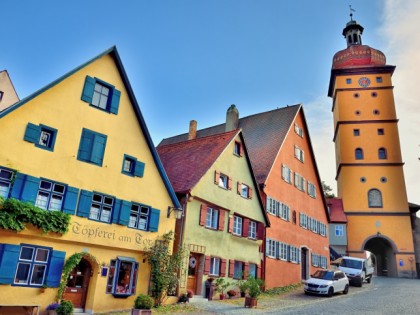 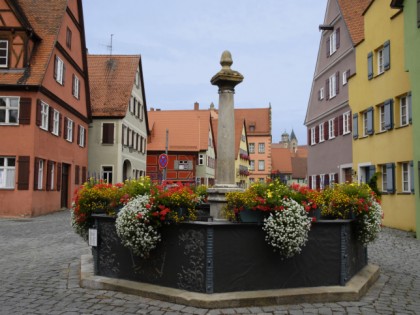 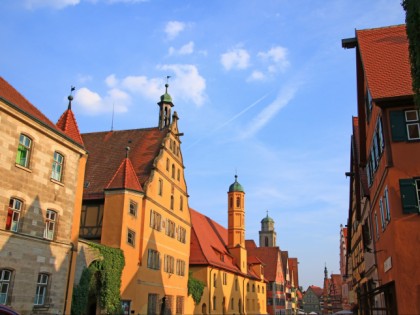 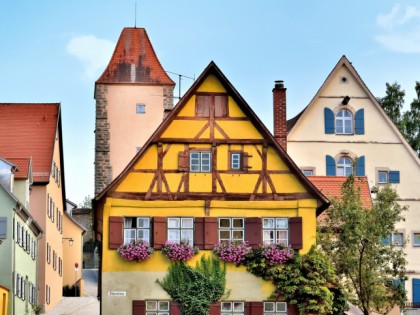 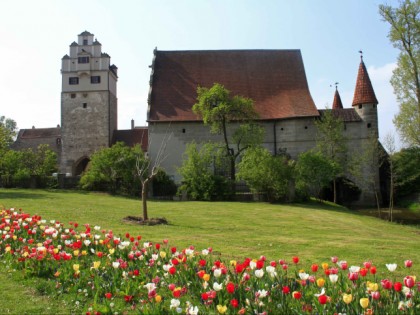 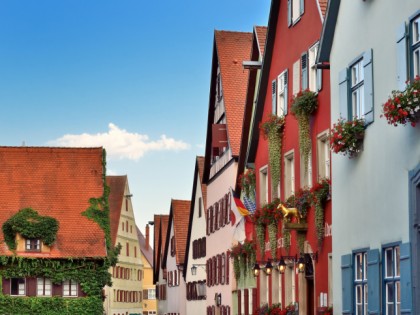 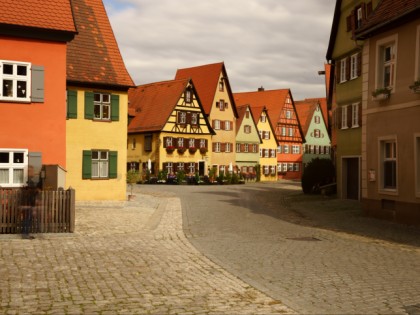 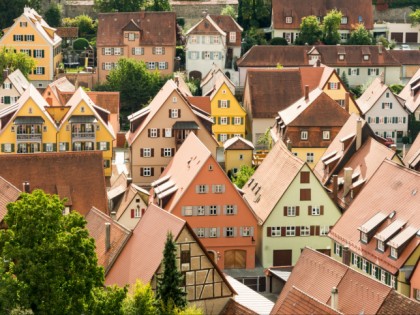 Dinkelsbühl is considered one of the main decorations of the Romantic Road (Romantische Straße) stretching across Bavaria. The breath of the medieval history is felt at every step here. Streets look like a set design. Back in 1962, appreciating the local zest, filmmakers decided to shoot here the US-German film adaptation of the world famous fairy tales of the Grimm Brothers. The film won the Oscar for the Best Costume Design. The broad market streets, the gloomy Gothic cathedral, unusually colorful houses with peaked roofs, wrought iron signs, the elegant Wine Square (Weinmarkt) always delight the traveler eyes ...

Dinkelsbühl was founded in 1130 and began to develop rapidly in 1351, when he was granted the status of an Imperial City. It was a time when the city grew rich on the production and sale of wool. It was also distinguished by a set of laws called Dinkelsbühler Law (Dinkelsbühler Recht). It was written in 1536 and dealt with various aspects of the life of citizens.

Since ancient times the city was surrounded by fortifications (Stadtmauern) that are still standing to this day. In 1826, King Ludwig I of Bavaria even issued a special decree banning the demolition of the wall of Dinkelsbühl. The Rothenburg and Nördlingen Gate (Nördlingen & Rothenburger Tor) are the most spectacular elements of the wall. Near the gate is the first park with a pond and the ancient Faulturm Tower, where you can enjoy relaxation after exploring the city. The Cathedral of St. George (Dinkelsbühl Münster St. Georg), built in 1499, dominates over the city. This is the largest hall-type church in Germany. The high bell-tower offers beautiful views of Dinkelsbühl with red-tiled roofs and the scenic surroundings. Tourists will certainly pay attention to the old Town Hall (Alte Rathaus) built in 1361 with a beautiful austere facade. The city’s history museum inside the Town Hall will tell details from the city’s life. The New Town Hall (Neue Rathaus) was built in the Renaissance style in 1733. On its main facade there are statues of nobility representatives and an artisan holding a scroll with a quote from the official Regulations (Richtungsbrief) in 1387, commanding to include representatives of the guilds in the city council.

The central attraction in Dinkelsbühl is the Wine Square (Weinmarkt) with the German House (Deutsche Haus) - one of the most beautiful half-timbered buildings in Germany. In the old days wine fairs were often organized in the city. After all, Nibelungen’s trade route and the Roman trade route passed through the city. The square got the name thanks to the regular fairs. The wine theme is actual here and now. Experts say that the Franconian wine (Frankenwein) in the bottle-amphora called Bocksbeutel is an excellent opportunity to arrange a holiday feast meal or make a gift to a friend. Prices for this wine are high, but it's worth it. The best sorts of the Franconian wine are Silvaner and Bacchus of the Main river valley, one of the most highly regarded German wine regions.

Besides wine, you will also find interesting snacks –the traditional Brotzeit -in Dinkelsbühl. The most famous snack is Pressack mit Musik. It is brawn with rings of crispy, "musical" onions, sauerkraut and pickles. Sometimes all it is served even without bread. But be sure to try sausages made from different types of meat without bread. Various kinds of Blutwurst, Bierwurst, Stadtwurst are always eaten with a rough peasant’s chunk of the Franconian black bread. At lunch in this region people usually eat rich soup broth - Leberknödelsuppe - large dumplings of beef liver, in which they add bread, eggs and spices. The potato salad (Kartoffelsalat) is another traditional and hearty dish. You can take fried carp - gebratene Karpfen - a very common dish in Franconia for dinner in this city.

The historical celebration called Kinderzeche or Children's March is the central event in the life of Dinkelsbühl. It takes place in the third week of July, it lasts ten days and is known all over Germany! This festival is associated with the legend of how the city in 1632 almost surrendered to the Swedish troops, but they did not ruin it, as they normally did it, but spared it. After all, children were involved in it! A procession of children came to the conquerers of the city gates and asked to spare the city and its inhabitants. The soldiers’ hearts trembled and Dinkelsbühl remained unharmed. The festivity lasts ten days. The city hosts a children's parade, where participants are dressed in elegant vintage costumes. Dance and musical groups perform, folk songs are sung, stalls sell traditional local food, and children are treated to all sorts of sweets.

Another important city holiday is the historical festival held in September and is called Life in the Old Town («Leben in einer alten Stadt») with parades and performances of creative groups. The main feature of the program is the concert of the famous boys' choir Dinkelsbühl Knabenkapelle, known far beyond the borders of Dinkelsbühl. In August, the old town of Dinkelsbühl becomes young: the long-haired young men in leather jackets and girls in heavy boots and gothic makeup come here. The Summer Breeze heavy metal music festival starts in the city. Famous rock bands from all over Europe and from America come to participate in it.

To complete the picture in Dinkelsbühl, be sure to go for a walk with the night watchman at nine o'clock in the evening. The medieval costume, halberd and lantern flame are its indispensible attributes. He blows into the horn, sings a song, goes through the old streets, regales tourists with wine and tells the ancient legend. After a night’s atmospheric walk, the city opens from another view and you will wish to come back here again.

Cafes, bars and restaurants in Dinkelsbühl 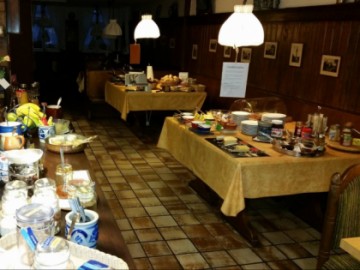 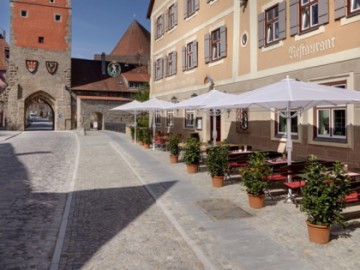 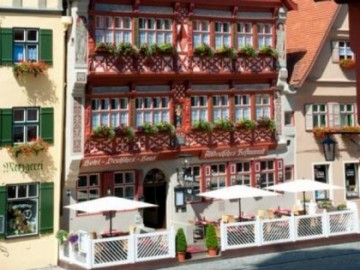 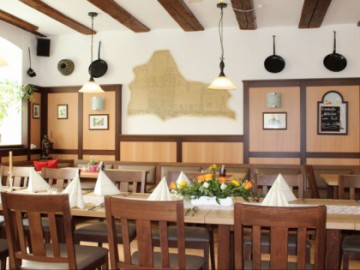 Landmarks in the city Dinkelsbühl 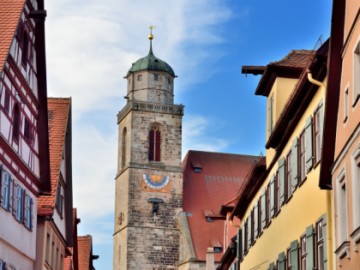 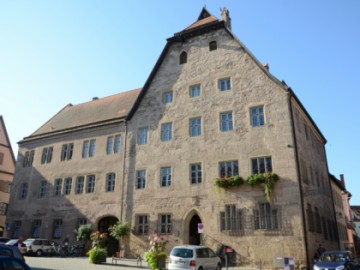 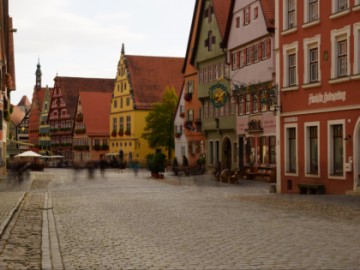