The name Dachau creates gloomy associations. All know about the notorious, Second World War concentration camp. But the history of the city includes not only black pages. For example, in the XIX century landscape painters took fancy to Dachau and the surrounding area. One of Germany’s largest colonies of artists was established here. Dachau was even called the city of artists. Today, too, one can walk in the quiet countryside that inspired painters and at the same time visit the palace of the Wittelsbach family with an extensive English park and pay tribute to the victims of Nazism ...

Dachau is known since the beginning of the IX century. The settlement was on the path leading from Augsburg to Munich. The two quickly became rich merchant cities, which in turn contributed to the welfare of Dachau. In the Middle Ages fairs were held here and the town flourished. But in the middle of the XVII century, during the Thirty Years' War it was destroyed, like a number of other localities in Southern Germany that adhered to the Catholic religion. The children's song "Pray, Little Child, Pray, Tomorrow Comes the Swede" is known in Germany until now: it is an echo of the war. After the XVII century Dachau ceased to play any significant role in the life of Bavaria, becoming a quiet province. Bavarian kings from the Wittelsbach family built here a summer country residence (Dachau Schloss). It is surrounded by a splendid English park, walking in which is a real pleasure.

Revival in the city life was at the turn of XIX-XX centuries. Dachau and the surrounding area with wooded hills and wetlands (Dachauer Moos) has become a mecca for German landscape painters. In the era of romantic painting, the image of everglades in the paintings was a popular topic. In 1890- 1914 famous German landscape painters like Max Liebermann, Ludwig Dill, Carl Spitzweg came here for studies. At that time Dachau was called the city of artists.

But the romantic era in the history of the city was replaced by sad events. As soon as the Nazis came to power, they organized the Dachau concentration camp in 1933. First, it contained opponents of the regime, as well as "people polluting the Aryan race." And with the joining of Germany in World War II, people displaced from the states occupied by Germany or warring with it became Dachau’s main population. Since the 40s Dachau was one of the most terrible Nazi extermination camps. The town's name became synonymous with crimes against humanity. Now there is a large memorial site (KZ-Gedenkstätte Dachau) in Dachau telling about the horrors of "the exemplary Nazi concentration camp."

Despite the fact that the memorial to the concentration camp prisoners is the main reason why people go to Dachau, the old center, the town hall, the Church of St. Jacob and the Church of St. Nicholas and St. Mary in the city are worth seeing. By the way, the distance from the capital of Bavaria, Munich, to Dachau is only 20 kilometers. So it is quite easy to get out from Munich to the world famous town with a sad past for one day.

Cafes, bars and restaurants in Dachau 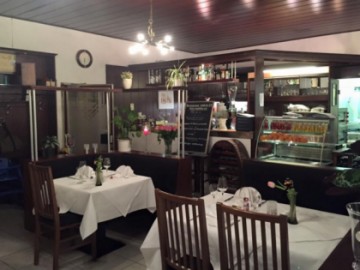 Landmarks in the city Dachau