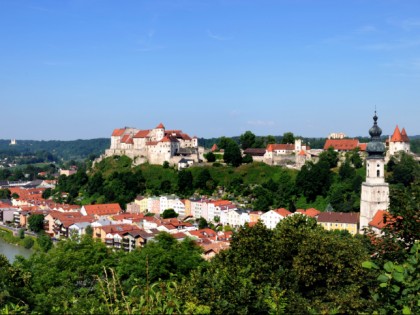 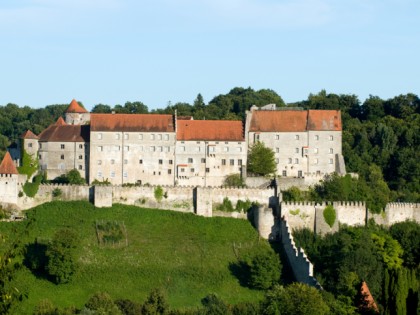 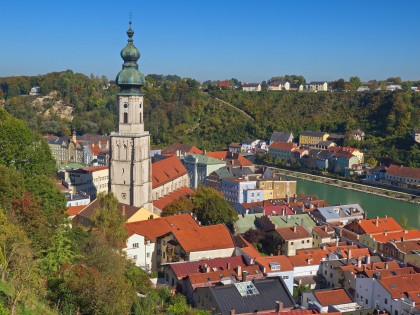 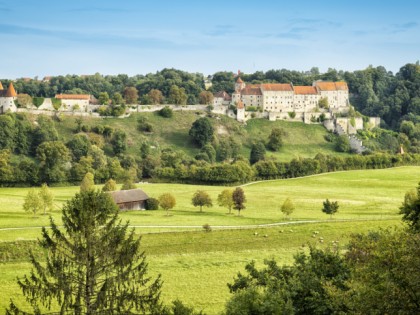 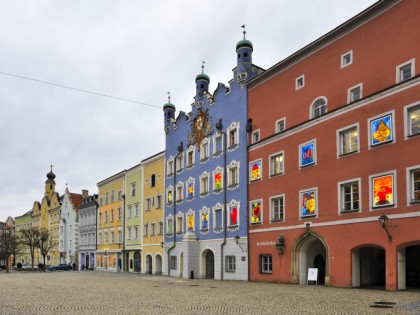 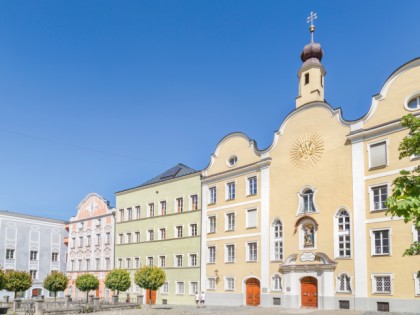 Burghausen: the Most Inaccessible Fortress of Medieval Germany

Burghausen Castle - an architectural masterpiece of the late Middle Ages- lies across a hill between the Salzach River and the Wöhrsee Lake. The castle wall is the longest in Europe! The scale of the fortress running high above the city is partly due to its proximity to Austria, the border with which passes just along the Salzach River. In spring one of the world’s largest jazz festivals brings thousands of visitors together at the castle. But generally jazz sounds in the squares and streets of Burghausen all the year round, so the city is often called the Bavarian New Orleans.

Traces of the first settlements in this land date back to the II century BC and belong to the Celts. The imperial city of Burghausen was first mentioned in the annals of 1025. Counts of Burghausen built the stone complex with a circular wall and a church over the Salzach River in the XI-XII centuries. Part of the masonry of the oldest part of the castle was discovered not so long ago. It can be viewed in the Knights' Hall. In the middle of the XIII century, the city began to develop rapidly thanks to the salt trade. Duke Heinrich XIII extended the castle and made it his second residence. It was the permanent residence of the Duchess with children and heir to the throne and his wife. And it was in Burghausen that the Dukes of Bavaria-Landshut kept their gold and silver.

The castle got the status of the most impregnable fortress of Germany in the XV century. The 1051m-long fortress wall hid the five big courtyards further protected by moats and drawbridges. It is the longest fortified wall in Europe! In the XVI century Bavarian dukes left the castle and introduced their own monopoly of salt trade. Although thanks to its strategic position and the powerful walls the castle continued to play an important role in the defense of Bavaria, the city virtually ceased to prosper. The old town stretches at the foot of the castle. Bürgerplatz Square is its center with the town hall and a baroque hall of the School of the Elector Maximilian. The 79-meter-high Church of St. Jakob (Jakobskirche) with a double dome is the tallest building in the old town. It was built in 1140 in the Romanesque style. Tourists will certainly be attracted by Die Grüben pedestrian zone with colorful houses of the Late Gothic style, which artists and craftsmen took fancy to in the Middle Ages. Now there are souvenir shops, hotels, bars, and restaurants here.

All the major Bavarian specialties are served in Burghausen. Lake fish in a salt crust (der fisch im salzmantel) and matjes - salted fillets of young herring are especially popular. Steckerlfisch- gutted freshwater fish, marinated in oil, spices and garlic and grilled on a stick- is the traditional beer snack. You should also visit the farmer's market in a new part of the city, which is open on Thursday. Here, farmers from all over Bavaria and Austria bring fruit, vegetables, meat, fish, bread and flowers. Here you can also eat local sausages, which are always sold in tents.

The cultural life of the city is full of events all year round. Over 45 years one of the world’s largest jazz festivals has been held here in March. Ella Fitzgerald, Roy Hargrove, Chris Barber, Chick Corea, Dave Brubeck and other well-known musicians have performed in Burghausen. However, the music does not stop in the city after the departure of stars: there are always jazz bands performing in Gruben from July to September. The Day of the city (Burgfest) is celebrated in Burghausen at the second weekend of July. For three days, the city goes back to the XVI century, rearranging the parade that the citizens staged in 1516 in honour of the visit of Emperor Maximilian I and the Duke William IV of Bavaria. A procession of nearly a thousand townspeople dressed in medieval costumes is the festival’s culmination. They all go up from the old town to the castle in a wagon pulled by horses. The castle territory hosts jousting tournaments, old crafts fair on which, in particular, the masters show how glassblowers, shoemakers and other artisans used to work.

You can see Burghausen in all its glory during a trip along the Salzach River on a wooden boat - the exact replica of those in which salt was transported in the Middle Ages. You can take a boat to Tittmoning or Raitenhaslach. A lovely view of the castle also opens from the Wöhrsee Lake. People come here from all over Bavaria. In summer they swim, while in winter they play curling and go ice-skating. By Christmas the lakeside is always decorated with wooden lamps. So winter is the best time for a stroll along the lake - after 04:30pm when the lights are lit, and the atmosphere becomes truly fabulous. However, the longest castle in Europe and all near it will captivate you at any time of the year!

Cafes, bars and restaurants in Burghausen 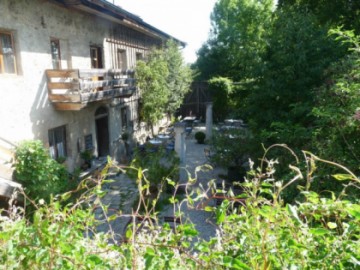 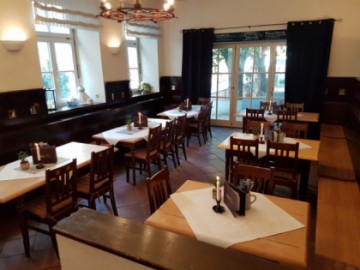 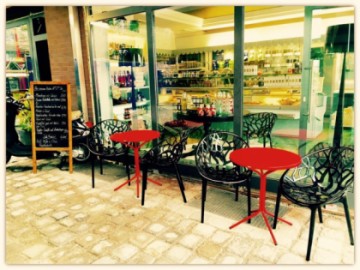 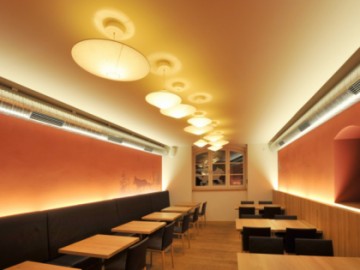 Landmarks in the city Burghausen 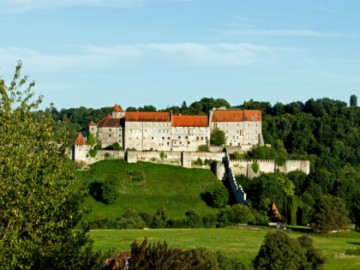 Treasure of the Burghausen Castle 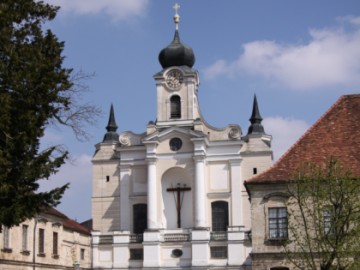 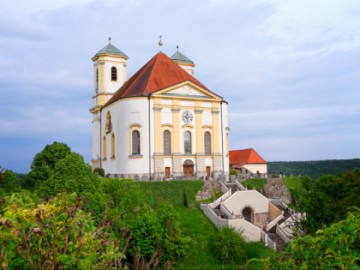 Marienberg - the Pearl of the Salzach Valley 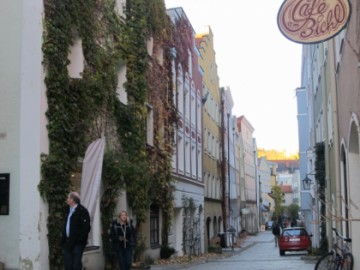 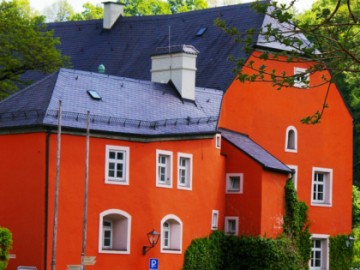 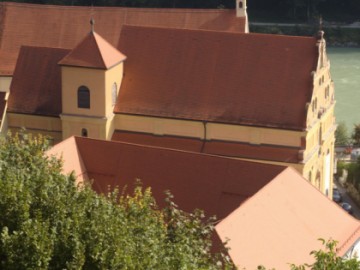 Church of St. Joseph, the Memory of the Jesuit Order