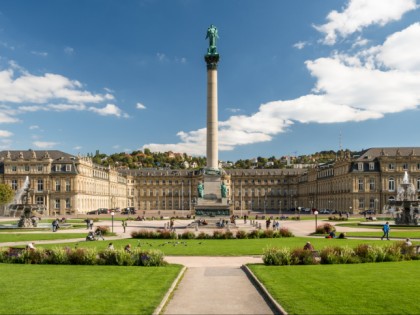 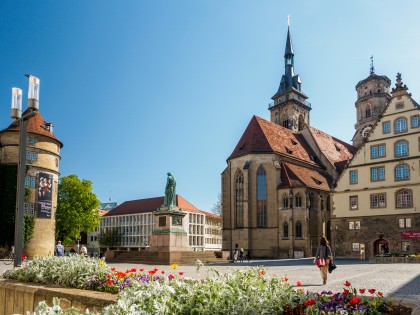 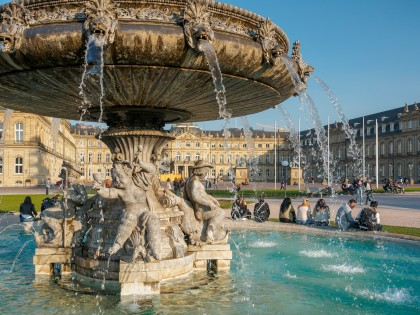 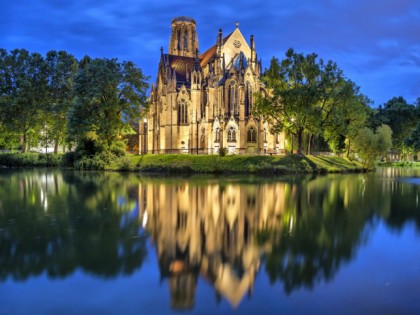 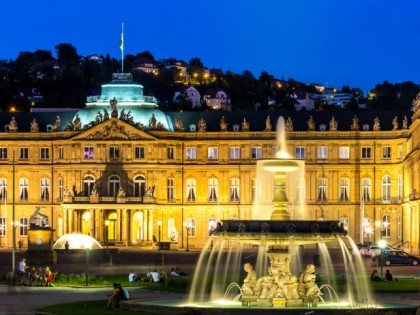 Stuttgart is the largest of the small towns in Germany

Stuttgart is the sixth-largest city in Germany. People say that Stuttgart is "the biggest of the small towns in Germany." It is well known for exemplary cleanliness, numerous vineyards within the city and for the largest Christmas Market in Europe. The building of Mercedes-Benz Museum, which reminds the shape of trefoil, is breathtaking and inside there is an exhibition of favorite cars of the Pope and Princess Diana. On the streets beer bikes could catch the eye. They can be driven by group of people, who sip a beer on the go.

The history of Stuttgart begins in year 950 and can be associated with the name of the Duke Ludolf, the son of Emperor Otto I. He founded a settlement, which bred horses for the cavalry. The place was named Stutengarten, which means "mare garden." Therefore, the emblem of the city, which is decorated with a horse, and  its name remind us of how it all began. By the XII century Stuttgart became a trade center, a hundred years later - a town, and in the beginning of the XIV century - the capital of the county Wurttemberg. In 1952, Stuttgart became the main city of the united state of Baden-Wurttemberg.

Stuttgart has strong wine traditions. Grapes are grown in the region since ancient times. Although the first official document confirming this dates back to year 1108. If the city legend to be trusted, medieval Stuttgart could produce so much wine that sometimes a mixture for the construction of houses would be kneaded on it. And at the XVI century during the wedding of the Duke Ulrich V, the fountain in front of the palace was filled with wine instead of water! Stuttgart is the only German city,  which territory of 17.5 hectares is covered with municipal vineyards. They can be found even in the city center! A walk up the stairs through paths, which leads on top of the hill with vineyards, is a popular tourist route. The most famous wine festivals of the city is Stuttgarter Weindorf ("Stuttgart Wine Village"), which is normally conducted at the junction of summer and fall. At these days over 100 pavilions, where you can taste about 500 local wines, are set near the Old Castle.

With local wine combines well the Swabian cuisine - simple to prepare, but delicious and hearty to taste. The most common meals are Spätzle (noodles) and its variety Kässpätzle (cheese noodles). Also, Schupfnudeln - plump potato noodles – is held in high esteem here. In almost every Swabian menu dishes that contain lentils can be found. These dishes are usually served with a pair of smoked sausages (Seidewürschtle). Maultaschen - a dish made out of dough with various fillings, resembling ravioli or dumplings - is popular here as well. It is believed that Maultaschen invented a monk from the Maulbronn Monastery, in order to "dilute" the harsh diet during Lent. He came up with an idea to mix chopped meat with potatoes, spinach and eggs and hid it in the dough, creating the illusion of vegetable dish. Hence the Swabian version of the name is Herrgottsbescheißerle, which roughly translates as "fool the God." Furthermore, economic swabians appreciate Maultaschen for the fact that it can never be spoiled: if all at once can not be eaten, then on the next day the dish can be warmed, and on the third day - chopped with an egg, it can be baked on a pan. This practical approach is reflected in the recipes of other Swabian delicacies - such as apple pudding Ofenschlupfe, which is made from stale bread, according to the original recipe.

Acquaintance with Swabian traditions is an interesting way to spend time in Stuttgart. One of them is related to the cleanliness of the city, which is always admired by tourists. Eberhard I, Duke of Württemberg, also known as Eberhard the Bearded, should be thanked for the neat appearance of houses and streets. It was he who in 1492 established the Kehrwoche - a rule requiring residents to clean up streets, courtyards and staircases, which are adjacent to their own houses. This rule applies to this day and is usually included in the lease agreement. For visitors there is a special tour that allows them to join this centuries-old tradition. Tourists are given a map and address of a local resident, whose turn to clean up came. The friendly host shows visitors the scope of work, hands tools for cleaning and at the end of the workload treats a guest with honestly earned cup of tea and a piece of cake. Authors of the idea believe that participation in Kehrwoche provide tourists a closer acquaintance with the city, rather than traditional tours.

The city center can be easily walked within three hours. It is best to start a jorney from the Palace Square (Schlossplatz). It is, in fact, a large green lawn, where in the warm seasons the locals and the tourists like to lie on the grass. The center of the square is decorated with the column, which was erected in 1841 in honor of the 25th anniversary of the reign of King William I. The column is framed by two similar fountains with figures, which symbolize the eight major rivers of Baden-Wurttemberg. The facade of Königsbau - the oldest shopping center in Stuttgart – overlooks the Palace Square. The atmosphere both inside and outside of the legendary Mercedes-Benz Museum creates an impression: gorgeous building, a rich collection of different machines - from the first car with an internal combustion engine to a high-speed racing cars - captures the imagination.

In Stuttgart there is a packed schedule of events with modern and ancient history. Even in 1818, King William I established the annual folk festival Cannstatter Volksfest to celebrate the first harvest after years of famine. In our time, this celebration begins in the third decade of September and lasts for about three weeks. Only the beer festival Oktoberfest in Munich is more popular than this event. From the last Thursday of November until 23d December in Stuttgart runs the largest Christmas Market in Europe. This is also an old tradition - the first mention of it was found in documents, which date back to 1692. The fair attracts up to three million visitors each year!

When planning a trip to Stuttgart, it is necessary to schedule the time. Otherwise there is a risk to get carried away with long walks through the vineyards and "lose yourself" within the walls of the Mercedes-Benz Museum. If travel plans are scheduled day by day, then it would be possible to admire the biggest in Europe grove of magnolia in the park Wilhelma, to look into the cleanest in the world piggery – Pig Museum, and – if you’re lucky– to see wrapped in film Mercedes cars, which pass tests in the conditions of the city.

Cafes, bars and restaurants in Stuttgart 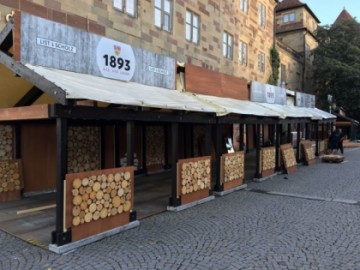 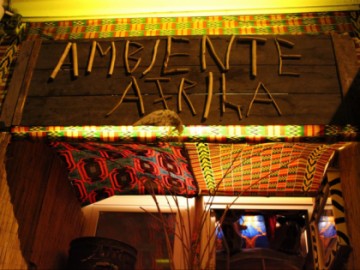 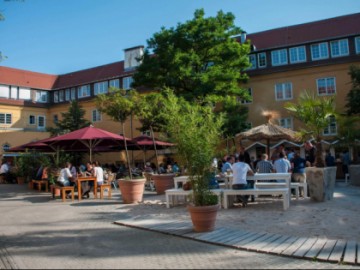 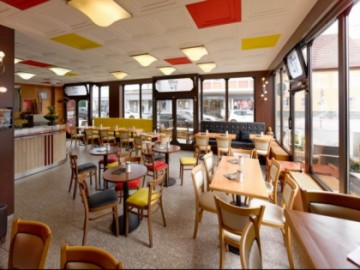 Landmarks in the city Stuttgart 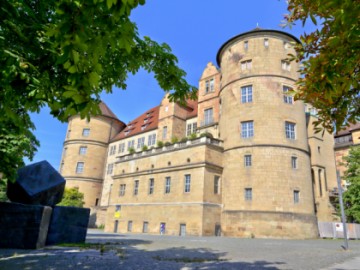 Old Castle invites to the museum 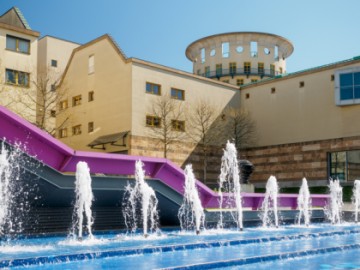 Stuttgart
The State Gallery of Stuttgart
Museums and Exhibitions 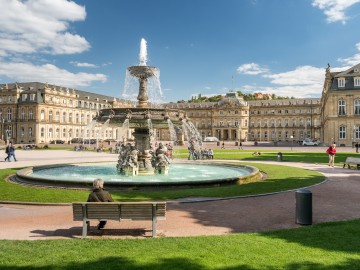 New Palace in Stuttgart as the answer to Palace of Versailles 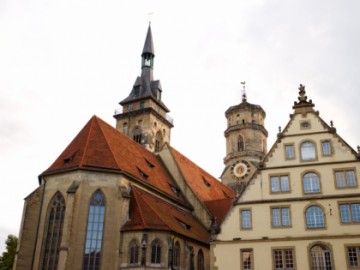 Collegiate Church keeps the history of the Counts of Württemberg 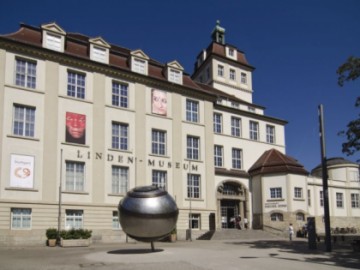 The journey around the world in the Linden Museum 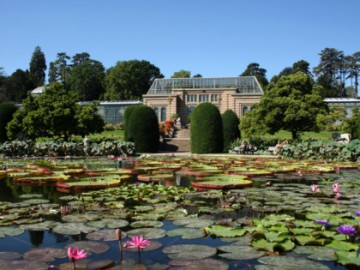 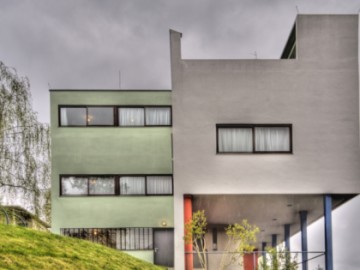 Stuttgart
Museum of Architecture under the open air
Museums and Exhibitions

Museum of Architecture under the open air 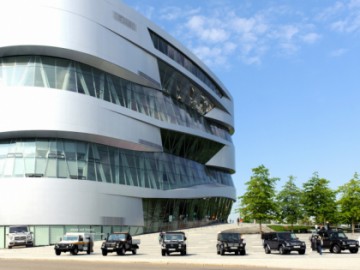